Thousands in Greece call for end to EU-Turkey migrant deal 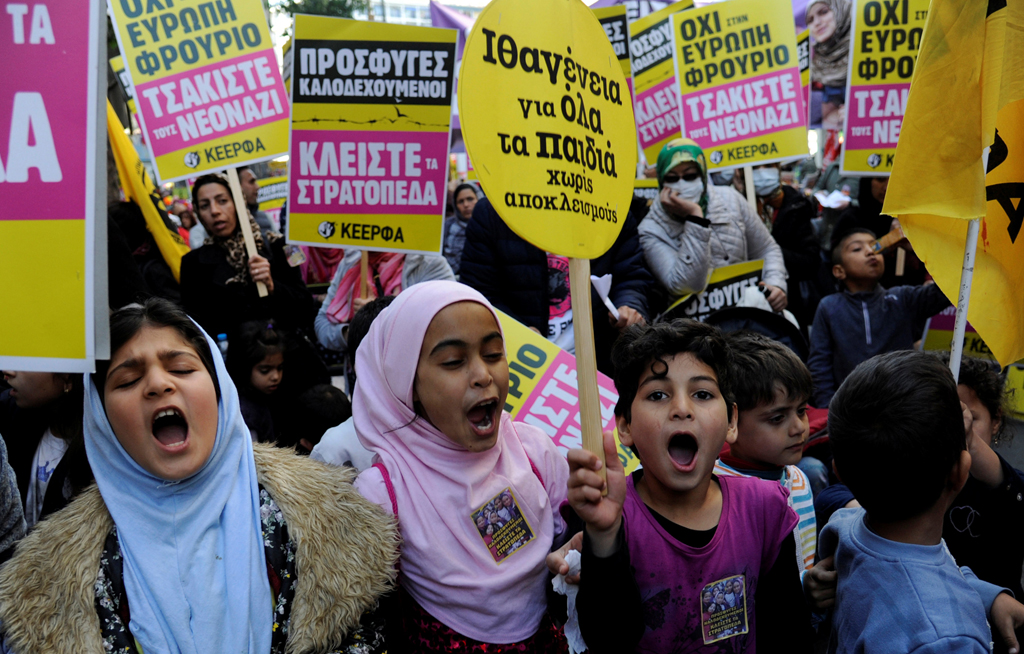 Refugee children shout slogans during a demonstration against racism in Athens, Greece, March 18, 2017.

ATHENS - Over 2,000 people demonstrated in the Greek capital in support of migrants and refugees on Saturday, calling for an end to the EU's year-old migrant pact with Turkey that cracked down on migrant flows.

"Cancel EU-Turkey deal of shame," read the banner at the head of the procession marching through the streets of Athens toward the European Commission offices, near the Greek parliament building.

The protest, organised by leftist, anti-racist and migrant organisations, was also attended by refugees and migrants, notably from Syria and Afghanistan, many with their children.

On March 18, 2016, Turkey signed a landmark agreement with the European Union, which helped put the brakes on a massive influx of migrants and refugees, especially from Syria, Iraq and Afghanistan.

Along with a series of border closures in 2016 in the Balkans and eastern Europe, the deal essentially blocked the Aegean route used by more than a million people from Turkey to Europe in 2015 and 2016.

The pact substantially reduced migrant flows and cut down on the number of migrant drownings in that part of the Mediterranean, but it also stranded thousands of exiles on Greek islands.

Now about 9,000 migrants and refugees are awaiting decisions on asylum claims, which can sometimes take months, according to the UN High Commissioner for Refugees (UNHCR). The Greek government puts that number at 14,000, including refugees from Syria.

In Greece 10.000 people on the street: "enough is enough - 1year EU-turkey deal of shame, indignity and deaths! #18M #welcome2stay pic.twitter.com/1Efo90zQ5W

"Asylum and housing for refugees", "No to deportations", chanted the demonstrators, marching under banners calling for the "Opening of borders".

Turkey's pledge, in exchange for more aid, visa-free travel and the speeding up of Ankara's long-stalled EU accession talks, was also aimed at deterring migrants from making the perilous sea crossing in the first place, knowing they could be sent back.

Some 1,183 migrants were returned to Turkey in the year ending in January, Greek police figures show.

Humanitarian organisations have contested the validity of the accord, saying it infringes on the rights of asylum by presuming Turkey is a safe haven for refugees.

The top Greek administrative court is expected to render a decision in April on a case brought by two Syrians.