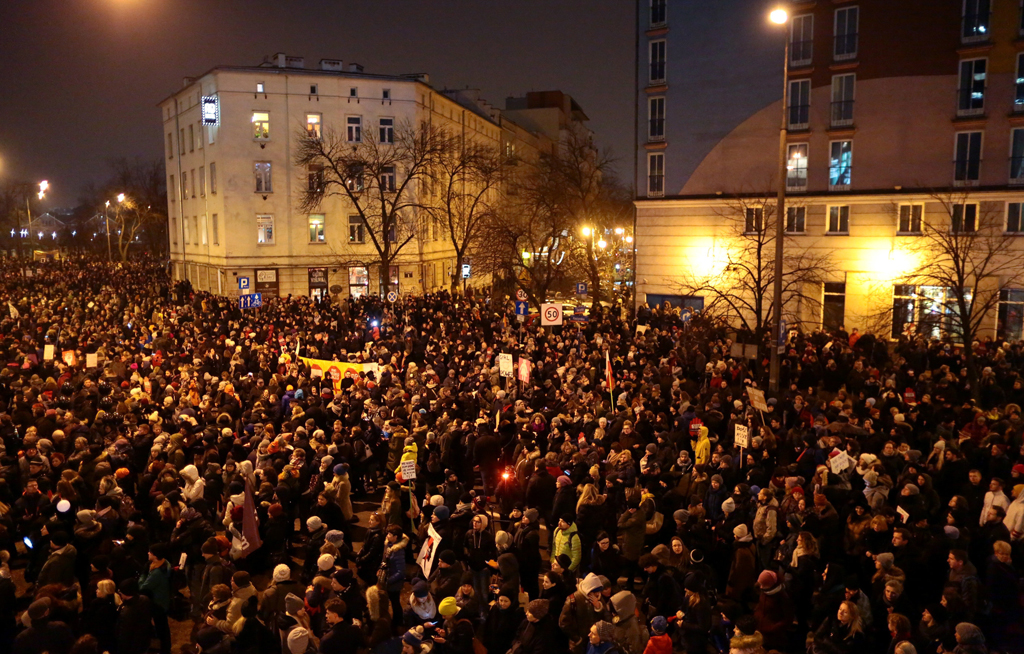 People gather during a protest against plans to further restrict abortion laws in Warsaw, Poland March 23, 2018.

WARSAW - Thousands of Poles took to the streets Friday to protest plans to tighten the abortion law, as the Council of Europe warned the new measure ran counter to Warsaw&39;s human rights commitments.

In Warsaw, men and women carried large red signs shaped like hands with the word "Stop", as well as others with slogans such as "your chapels, our uteri" and "we want choice, not terrorising".

Demonstrators had gathered outside parliament before marching through the city to the police-guarded headquarters of the ruling right-wing Law and Justice (PiS) party, which backs the citizen&39;s bill with the support of the Catholic hierarchy.

Others marched from the seat of the Warsaw archdiocese to the PiS headquarters, making stops in front of churches along the way.

The "Black Friday" protests also took place in other cities across the country, including Gdansk, Krakow, Poznan, Szczecin and Wroclaw.

According to the bill, which could pass in parliament where conservatives have a majority, abortion would be outlawed except in cases where the mother has been raped or is a victim of incest.

She said malformation was behind 1,046 legal abortions carried out in Poland in 2017 or 96 percent of the total.

"If adopted, the draft law would remove the possibility of terminating the pregnancy in case of severe foetal impairment, including in cases where such impairment is fatal," Muiznieks wrote.

"This step would be at variance with Poland’s obligations under international human rights law."

The clip was one of a string of often controversial measures the PiS administration has introduced since taking power in late 2015 to boost the devoutly Catholic country&39;s birth-rate, which is among Europe&39;s lowest.

The government has cut state funding for IVF and tried to tighten the already restrictive abortion law but buckled under pressure from nationwide protests in 2016 with women dressing in black to demonstrate.

Those proposals, more restrictive than the latest draft, called for jail terms of up to five years for doctors, patients and others taking part in abortions.

The government also introduced the "500+" child benefit granting 500 zloty (118 euros, $137) per child for families with more than one offspring.