Thousands of Venezuelans fingerprinted in bid to remove President 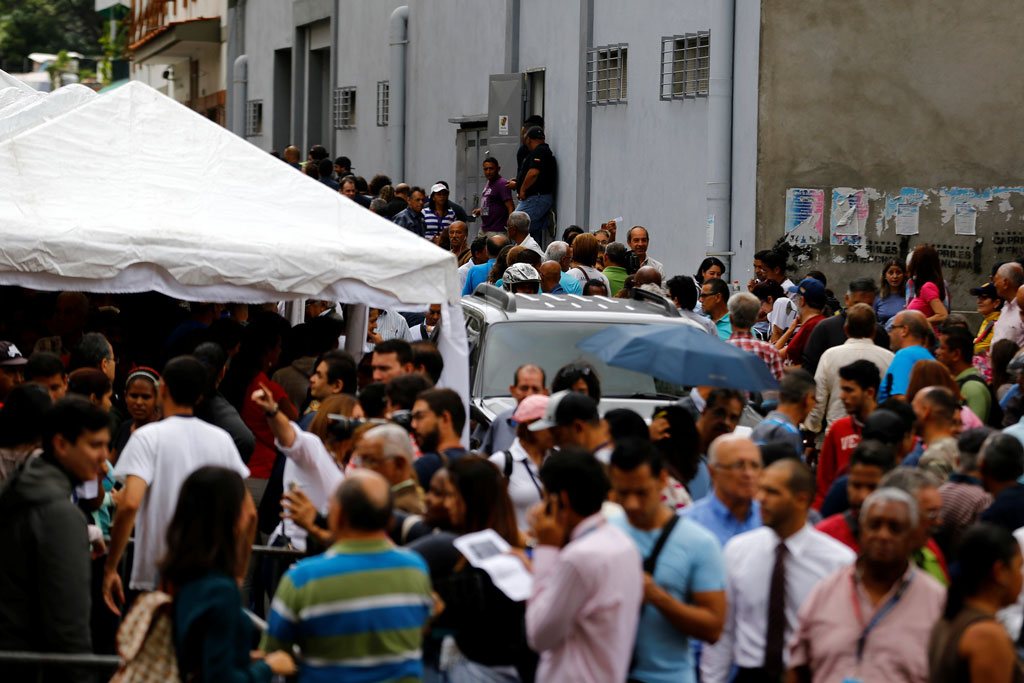 CARACAS – Venezuelans queued to get fingerprinted Monday in a crucial phase of efforts to force President Nicolas Maduro from power, after food shortages sparked deadly protests and looting.

Thousands of Maduro&39;s opponents lined up to submit their fingerprints so electoral authorities can authenticate signatures on a petition calling for a referendum on his rule.

The procedures, due to run until Friday, could make or break the bid to hold a recall vote on Maduro.

The opposition says he must be removed to rescue the South American country from economic disaster.

Crowds of citizens holding identity cards queued up to have their electronic prints taken at the National Electoral Council in Caracas and around the country.

"We want another country, a nice one," said Amanda Zerpa, 59, leaning on a cane after giving her fingerprints.

"They are not governing the country well."

She had a heart attack seven months ago and, like many of her compatriots, has been struggling to get hold of medication.

Her clothes-selling business has suffered because she can no longer afford to buy stock abroad.

Of the 1.3 million signatures recorded by the electoral board in the initial petition, at least 200,000 must be authenticated to pass to the next phase.

The next step will require the collection of four million more signatures to call a full referendum.

Venezuela is grappling with an economic crisis sparked by the plunge in prices for its crucial oil exports.

People face shortages of basic foods and goods as well as electricity blackouts.

The opposition says Maduro&39;s economic management is also to blame. They denounce the jailing of his political opponents.

Maduro is resisting efforts for a referendum. He has alleged irregularities in the signature process.

The president has warned he may decree emergency measures if confronted with more violence.

Such measures could prevent the recall referendum from taking place.

The opposition is rushing to complete the recall process by January 10, the cutoff date to trigger new elections.

After that date, a successful recall vote would simply pass power to Maduro&39;s hand-picked vice president.

Opposition lawmaker Delsa Solorzano said that the referendum would have to take place by early November to have a chance of succeeding against Maduro.

Maduro has challenged the referendum drive in the Supreme Court. His opponents say he controls the court and the electoral authorities through his allies.

Jorge Rodriguez, head of a panel appointed by the president to oversee the recall push, called the proceedings a "farce" by the opposition "trying to create a climate where violence would erupt."

The head of the electoral council Tibisay Lucena warned that any violence during this week&39;s proceedings could cause the process to be suspended.

Maduro blames the crisis on an "economic war" by his capitalist rivals.

Analysts and some political leaders have warned of further unrest if the referendum is blocked.

"Venezuela is like a bomb that could explode at any moment," said senior opposition leader Henrique Capriles.

"If the social tension keeps rising, if starts to boil over, as is happening, the outburst is going to be much worse."