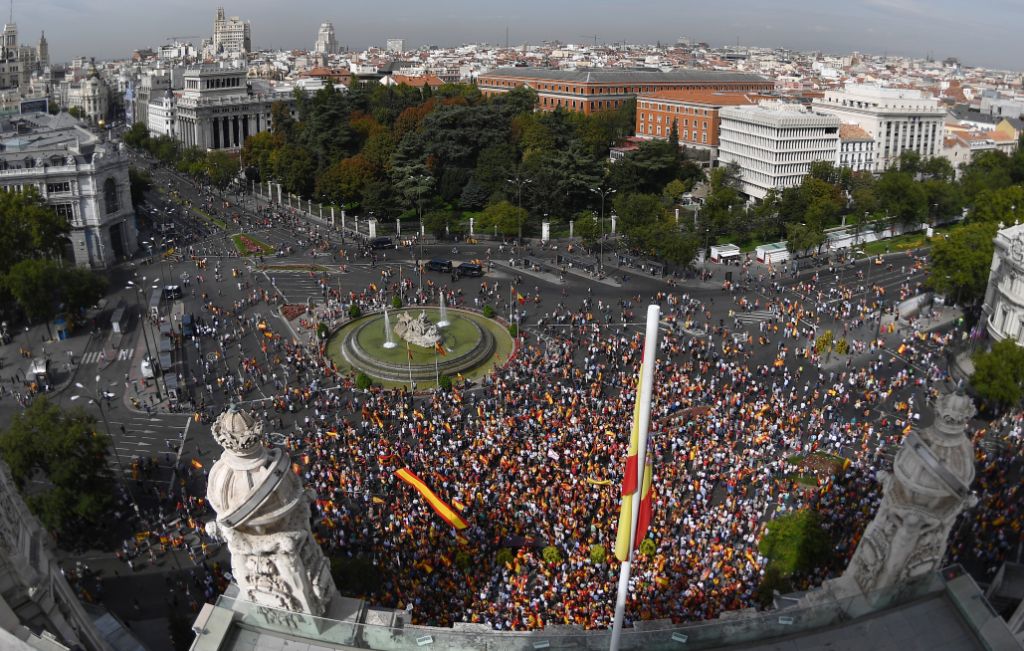 People gather in front of the Cibeles Palace during a demonstration against independence of Catalonia called by DENAES foundation for the Spanish Nation Defence on September 30, 2017 in Madrid.

MADRID, Spain - Thousands of people, many waving red and yellow Spanish flags, rallied in Madrid in favour of Spanish unity on Saturday, a day before a banned referendum on independence for Catalonia.

The demonstrators gathered in the central Plaza de Cibeles, in front of the capital's town hall, chanting "Catalonia is part of Spain!" and "I am Spanish, Spanish, Spanish!" -- a cry usually heard during national team football matches.

Some of the demonstrators called for Catalonia's pro-independence president, Carles Puigdemont, to be jailed.

Puigdemont has vowed to push ahead with the independence vote for Catalonia, a wealthy northeastern region that is home to about 7.5 million people, even though a Spanish court has ruled that the vote is unconstitutional.

Prime Minister Mariano Rajoy's conservative government has also said the referendum is illegal and has vowed to do everything in its power to stop it.

Threatened by Madrid, Catalonia Referendum Is Game of Cat and Mouse https://t.co/eKzpNPJtR8

"The state needs to explain the benefits of remaining united, instead of repeating all the time that the referendum is illegal. But there is no leader in Spain," said Rafael Castillo, a 59-year-old engineer at the rally, wearing a scarf with the Spanish flag around his neck.

"We should not have come to this. We have reached a point of no return," said Cepeda, a Spanish flag tied around the waist.

Maite Lopez Sanchez, 55, who came to the protest with her daughter, said Spanish institutions should "explain better what they are doing to enforce the constitution".

"We don't know what can happen tomorrow, anything can happen," she said.

The referendum has sown deep divisions among Catalans themselves, while provoking one of the biggest crises to hit Spain since democracy was restored after the death of Franco in 1975