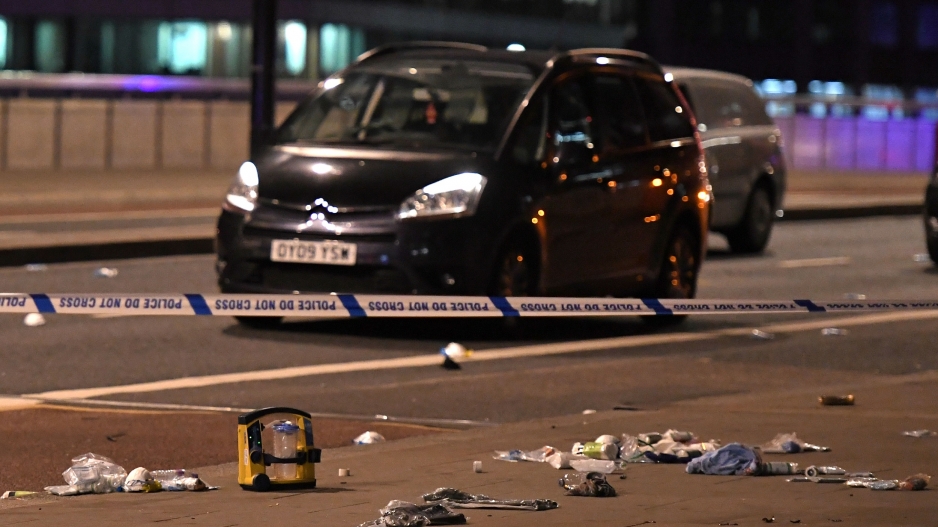 Armed police fired shots after reports of stabbings and a van hitting pedestrians on London Bridge on Saturday.

LONDON - Three assailants stabbed people at random after smashing into pedestrians in a van Saturday, killing six in a "terrorist" attack in central London before armed officers shot all three dead.

As they rampaged through a busy night-life hub around London Bridge, the trio wore what looked like suicide vests which turned out to be "hoaxes", said Mark Rowley, head of counter-terrorism policing.

"We believe that six people have died in addition to the three attackers shot dead by police," Rowley said.

How the events of last night's attacks in London unfolded #LondonAttacks #LondonBridge pic.twitter.com/7UZnnUY3q7

More than 30 casualties were rushed to hospitals in the area, according to the London Ambulance Service.

The attack came just five days ahead of a general election and just minutes after the end of the Champions League final between Real Madrid and Juventus in an area teeming with bars where many fans were watching the football on television.

Britain is on high alert only 12 days after a suicide bomber killed 22 people at a concert in Manchester, northwest England and ahead of Thursday's general election, in which security is a major theme.

It is the latest in a string of attacks to hit Europe, including in Paris, Berlin and Saint Petersburg.

Witnesses described the van speeding into several pedestrians on London Bridge and then one or more knife-wielding men sprinting towards bars packed with revellers enjoying a Saturday night out.

One witness described seeing five assailants and several people said they were locked inside pubs and restaurants by police and had to come out with their hands on their heads.

Italian photographer Gabriele Sciotto, who was watching the Champions League final at the Wheatsheaf pub in Borough Market, said he saw three men shot just outside the pub.

In his picture, a man wearing combat trousers, with a shaved head and what looked like a belt with canisters attached to it could be seen on the ground with two more bodies behind him.

A man called Gerard told the BBC: "They were stabbing everyone. They were running up and going 'This is for Allah'."

Police responded rapidly with dozens of emergency vehicles and authorities led shellshocked members of the public away from the scene.

The three suspects were shot by armed police within eight minutes of the first call to the emergency services.

The attack had harrowing echoes of an attack on London's Westminster Bridge when 52-year-old British Muslim convert Khalid Masood rammed his car into pedestrians before crashing into the barriers surrounding parliament and then stabbing a police officer to death.

Police said the first reports of a "vehicle in collision with pedestrians on London Bridge" came at 10.08pm and were quickly followed by "reports of stabbings in Borough Market," at the south end of the bridge.

Prime Minister Theresa May confirmed the "terrible incident in London" was being treated as "a potential act of terrorism."

She will hold an emergency ministerial meeting later on Sunday and Facebook activated its safety check function for people in London to let their loved ones know they are safe.

US President Donald Trump offered his help, tweeting "WE ARE WITH YOU. GOD BLESS!"

We need to be smart, vigilant and tough. We need the courts to give us back our rights. We need the Travel Ban as an extra level of safety!

French President Emmanuel Macron said France was "more than ever at Britain's side."

US pop star Ariana Grande, whose concert in Manchester was the scene of last week's fatal terror attack, tweeted: "Praying for London".

"There was a van that crashed into the fences on London Bridge. And then there was a man with a knife, he was running. He came down the stairs and went to the bar," Dee, 26, who was visibly in shock and declined to give her last name, told AFP.

BBC reporter Holly Jones, who on London Bridge at the time of the incident, said she saw a van driven by a man travelling "at about 50 miles (80 kilometres) an hour".

Alex Shellum at the Mudlark pub near the scene of the attack said a woman had come into the bar "bleeding heavily from the neck".

"It appeared that her throat had been cut," he told the BBC.

Another witness, who gave his name as Alessandro, also told BBC radio that he saw a van strike several people on London Bridge.

"Then I tried to help people, wounded people."

Husband and wife Ben and Natalie told BBC radio they were outside Borough Market when they witnessed a stabbing.

Ben said: "We saw people running away and then I saw a man in red with a large blade, at a guess 25 centimetres long, stabbing a man, about three times.

"It looked like the man had been trying to intervene, but there wasn't much he could do. He was being stabbed quite coldly and he slumped to the ground."

Ben said the man then walked towards another pub. He said they saw a metal chair being thrown towards the man.

"Then we heard three gunshots, definitely gunshots, and we ran."