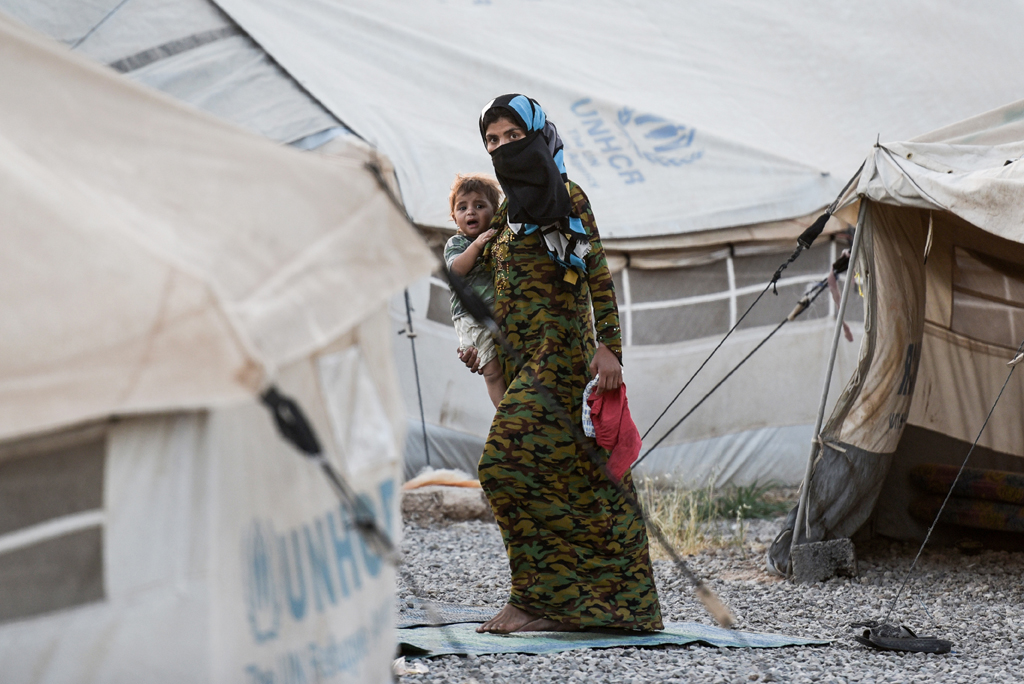 An Iraqi woman carries a child at the Hasan Sham camp for internally displaced people on June 10, 2017.

KHAZIR, Iraq - Wazira rocks her tiny baby pleadingly but he is inconsolable, crying for the milk his mother can neither produce herself nor buy in a camp near the Iraqi battleground city of Mosul.

"He's been crying since the moment he was born. He only stops when he's so exhausted that he falls asleep," the 24-year-old Iraqi mother said, sheltering her baby Rakan from the scorching sun with a piece of white cloth.

"I cannot breastfeed him and I feel he's never satisfied. There's no good food to eat and no money to buy baby formula," she said, sitting outside one of the clinics in Khazir camp.

The camp southeast of Mosul, where Iraqi forces are deep into the eighth month of a massive operation against the Islamic State jihadist group, is crammed with around 32,000 people displaced from the war-torn city.

PICS: Fleeing IS, Mosul's civilians cart out the living and the dead

Conditions in Khazir, one of the largest -- but not the worst -- displacement camps around Mosul are difficult. Temperatures soaring past the 110-Fahrenheit (43-Celsius) mark add to Rakan's discomfort.

"Sometimes I pound the biscuits they give us at the camp into powder and mix them with water to try to feed him by force," said the young mother, her face partly covered by a black veil.

A few yards (metres) down the queue, Marwa is also waiting for her turn to take her eight-month-old daughter to a doctor.

The 25-year-old mother, who fled west Mosul with her family two weeks earlier, already had no maternal milk to give Maryam five months ago.

"These past few months made me very tired, we kept moving from house to house until we finally managed to get out," she said. "I was sick and couldn't feed her anymore."

As elite forces retake the city one neighbourhood at a time, civilians often used as human shields by the jihadists stay cooped up in their homes -- at risk from shelling and dwindling food supplies -- until their area is retaken.

The line of haggard-looking mothers holding their wailing babies, curled around the clinic run by the International Medical Corps, a US-based charity.

Neshmeel Diller, one of the doctors at the clinic, said she examined up to 80 women in a single day.

"Seventy percent of them complain of their inability to breastfeed and of their children always being hungry and crying all the time," she said.

"The psychological condition of these mothers and the hormonal changes caused by anxiety and depression, the lack of privacy and physical comfort as well as of balanced nutrition... all these factors converge to affect their ability to breastfeed," Diller said.

She added that the pressure of life in the camp often meant that mothers would lose the patience to repeat their attempts.

Doctors Without Borders (MSF), another medical charity, said it was also monitoring the impact of high lactation failure rates on nutrition among the displaced child population.

More than 800,000 people have been forced from their homes since the start of the Mosul operation last October.

Most experienced traumatising living conditions under the ruthless rule of IS for close to three years, risked their lives trying to flee and now face a very uncertain future.

Hard not to get choked up watching this. Little girl survived ISIS massacre and "hid against her mother's corpse."https://t.co/0EcRLpZPoS

"We do notice an increase in malnutrition among babies whose mothers are no longer able to breastfeed," she said.

"This is because formula milk is often hard to come by or extremely expensive in besieged areas of Mosul and in the camps."

The UN Children's Fund said it had noticed a spike in malnutrition among the most recently displaced children and had begun distributing a peanut-based supplement among affected populations.