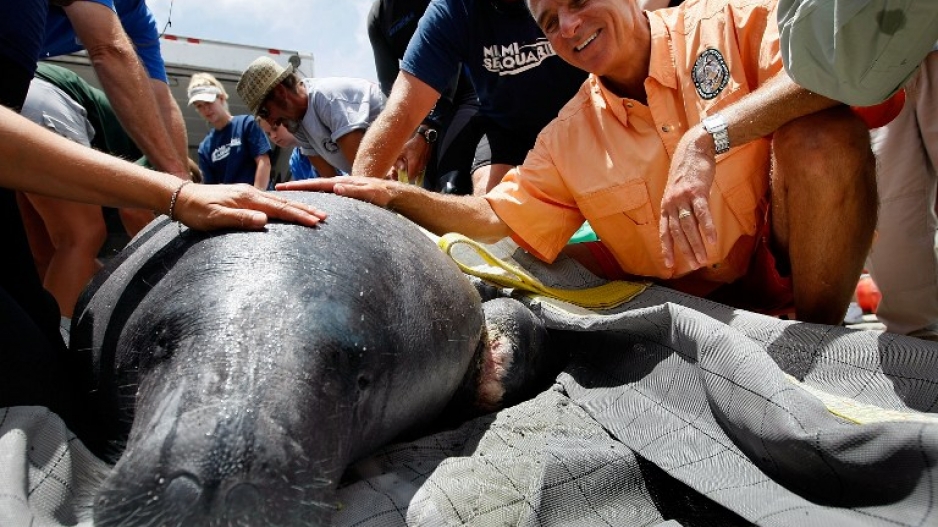 Florida Governor Charlie Crist (R) helps members of the Florida Fish and Wildlife Conservation Commission, and other organisations as they released Patsy the Manatee back into the wild on May 15, 2009 in Homestead, Florida.

MIAMI - Toxic algae blooms that deplete the water of essential oxygen are killing a record number of manatees in Florida this year, biologists say.

A total of 769 manatees have died, making 2013 the deadliest year ever for the blubbery denizens of the deep found off the Florida coast, Save the Manatee Club announced.

With more than two months left this year, nearly twice the number of manatees have already died compared to all of 2012, which saw 392 confirmed manatee deaths.

The last record -- 766 dead manatees -- was set in 2010, when an unusually cold winter and spring killed hundreds of the delicate creatures, according to the Florida Fish and Wildlife Conservation Commission.

Manatees live near the coastline, and when the weather turns cold, they often shelter near springs or in warmer discharge canals at power plants to avoid the condition known as "cold stress," which can weaken and eventually kill the aquatic mammals.

"With 2013&39;s catastrophic loss of manatee lives coming so close on the heels of the mass mortality suffered during 2010, the already difficult job to ensure the survival of these gentle and defenseless marine mammals has been made all the more challenging, and it&39;s not over yet," said the club&39;s executive director Patrick Rose.

"What we put into our waters, how much we pump from our aquifer and draw from our springs and rivers, together with how we use our waterways, all has an impact on our own lives and the lives of every aquatic species."

Toxic red-tide bloom killed 276 manatees this winter and spring in southwestern Florida, according to the Florida Fish and Wildlife Conservation Commission. Most of the deaths took place in the Cape Cora-Fort Myers region off the Gulf coast.

The second event remains unexplained, but saw more than 100 manatees die of undetermined causes in Brevard County off the Atlantic coast.

Of the total number of deaths this year, 123 were stillborn, newborn or young calves, in another record for that mortality category.

Manatees are a protected species in Florida, highly affected by urban development in recent years along the coast in the central and southern parts of the state.

In the bay of Miami, where families of three or four manatees are commonly spotted along the shore, many of the animals are killed after being struck by boats.