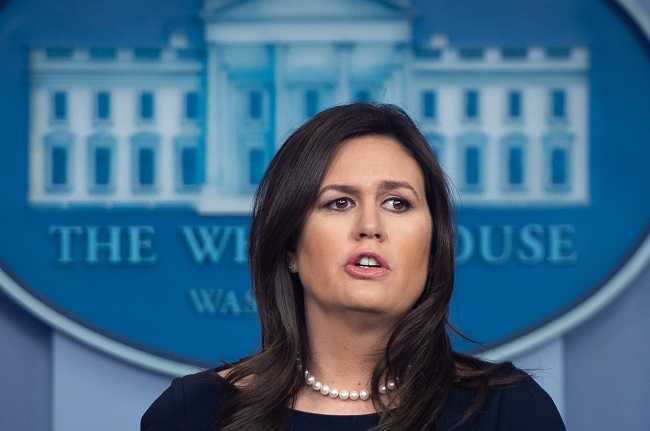 President Donald Trump on June 13, 2019 made the surprise announcement of the departure of spokeswoman Sarah Sanders.

WASHINGTON - President Donald Trump on Thursday announced the surprise departure of his spokeswoman Sarah Sanders, after a combative tenure that saw her all-but kill off traditional White House briefings to journalists.

Sanders has been one of Trump's most loyal foot soldiers, almost constantly at his side during his tumultuous two and a half years at the White House and during the campaign before.

Trump announced her exit in a tweet and did not name a replacement.

"After 3 1/2 years, our wonderful Sarah Huckabee Sanders will be leaving the White House at the end of the month and going home to the Great State of Arkansas," Trump said, adding that he hoped she would run for governor of her state.

Sharp, sometimes acid-tongued, Sanders has not been prone to the almost comic slip-ups that embarrassed predecessors in the job, such as short-lived Trump spokesman Anthony Scaramucci.

But she has earned a reputation for bruising clashes with journalists whom she finds over-critical -- often echoing her boss's attacks on unfavorable coverage as "Fake News."

At a White House event Thursday on reintegration into society for ex-prisoners, Trump interrupted proceedings to summon the "warrior" Sanders from the audience and lavish praise on her record.

In fact, Sanders, 36, has a sometimes bitter relationship with the White House press corps and is seen as responsible for the demise of the formal daily briefing -- practically an institution under previous presidents.

Pressed during one particularly combative briefing to distance herself from Trump's characterization of the media as the "enemy of the people," Sanders refused.

The last time she took to the podium for a back-and-forth with reporters in the White House briefing room was March 11. Instead, she communicates largely through interviews on the president's favorite TV network Fox News and short, informal briefings with other journalists outdoors.

She has also been accused of telling repeated lies to reporters, although she denies this.

Despite Sanders' damaged reputation in media circles, there had been no hint from the administration that her exit was imminent.

Sanders' father Mike Huckabee is a former Republican governor of Arkansas, making her something of a member of conservative royalty.

Called up to the microphone by Trump at the ex-prisoners' event, a visibly emotional Sanders said she would "try not to get emotional, because I know crying can make us look weak."

In a brief address, the spokeswoman praised Trump and her colleagues at the White House, saying she "loved every minute" of the job.

"I'm going to continue to be one of the most outspoken and loyal supporters of the president and his agenda and I know he's going to have an incredible six more years and get a lot more done," she said.

She made no mention of the media or the role of journalists at the White House.

Although Sanders is often blamed for the White House's killing off of the press briefing, she has been serving a president who from the start decided to tear up the media playbook.

With Trump communicating directly via Twitter and other social media to tens of millions of people every day, the traditional role of a press office putting out statements has become partly redundant.

And while journalists now rarely hold the administration's feet to the fire in the calm, organized setting of the briefing room, they have extraordinary access to Trump himself.

The president holds his own impromptu weekly briefings in the Oval Office or out on the South Lawn before boarding his Marine One helicopter. In contrast to real press conferences, these occasions can be chaotic and are rarely carried on live television.

Sanders may not speak much, but she is always there -- in the background.