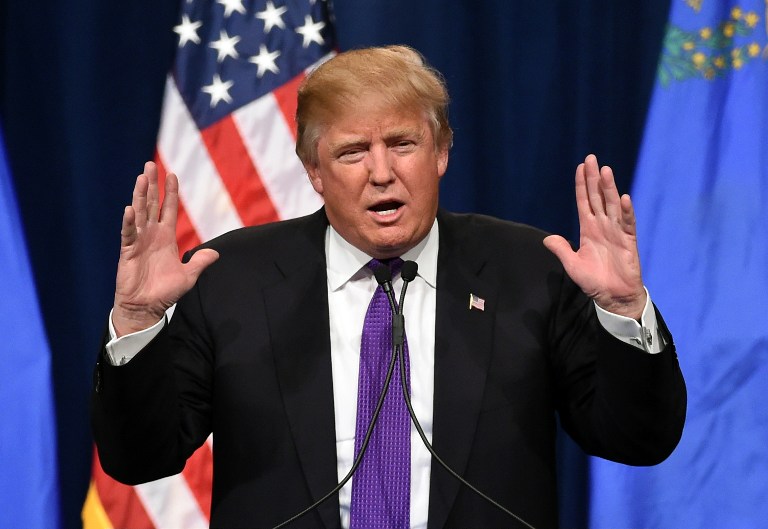 Republican presidential candidate Donald Trump speaks at a caucus night watch party at the Treasure Island Hotel & Casino on February 23, 2016 in Las Vegas, Nevada. The New York businessman won his third state victory in a row in the western caucuses.

"It&39;s great to be home," the 67-year-old Manhattan tycoon told a fist-pumping, cheering crowd at Grumman Studios in the Long Island town of Bethpage, where Apollo Lunar Module spacecraft were once built.

Trump ignored his drubbing by evangelical Cruz in the Wisconsin state primary and mocked the Texas senator for denigrating New York values and reportedly pulling in a far smaller crowd earlier on Wednesday.

Cruz berated the supposedly non-conservative values of America&39;s largest city earlier in the campaign; Trump defend the city for its bravery and resilience after the 9/11 attacks in 2001.

"The bravery that was shown was incredible. We all lived through it. We all know people that died," he repeated to cheers.

"I&39;ve got this guy standing over there looking at me, talking about New York values, with hatred," he said. "So, folks, I think you can forget about him. Forget about him. He is Lyin&39; Ted."

Trump leads Republican polls for the New York state primary on 19 April, but faces a steep ascent to the Republican nomination, increasing the likelihood of a contested convention in July that could throw the party&39;s nod to someone more to the liking of the establishment.

Outside the venue, some distance away, protesters shouted "Hey, hey, ho, ho Donald Trump has got to go," and waved posters proclaiming "Dump Trump" and "Lets Build You A Wall."

"He is a misogynist pig, a war-monger and a very dangerous man. I don&39;t want him to be president" said Bethpage resident Deborah Poppe, who said she would be voting for Democratic nominee Bernie Sanders.

Security was razor tight. Police lined the route. Members of the audience were not permitted to bring bags. On-site parking was prohibited forcing people to walk or take shuttle buses.

&39;These are my people!&39;: @realDonaldTrump&39;s homecoming is YUGE 10K New Yorkers jam into a hangar 2 hear Mr. Trump! pic.twitter.com/cRAt6fhOP6

After Trump&39;s Wisconsin defeat his daughter Ivanka made a return to her father&39;s side on the campaign trail, introducing him in Bethpage one week after giving birth to her third child.

The crowd lapped up his stump speech, responding with deafening cheers to his promises to defeat the Islamic State extremist group, bring back jobs and build a wall along the border with Mexico.

Trump at one point claimed there were 17,000 people in the audience, but there was no independent confirmation of the precise number there.

On the surface, it was typical of the rallies that the Republican frontrunner has commanded across the country, pulling in numbers that few of the other candidates in the 2016 presidential race can muster.

Families, mothers clutching babies, retirees and young voters professed as much love for Trump as ever, but beneath the surface some expressed concern that he might be coming unglued.

"Sometimes, I&39;m watching him and I&39;ll cringe and I&39;m like &39;oh Donald&39;," said Dorine Lambert, a proofreader for a community newspaper from Smithtown accompanied by her grown-up daughter. "He goes overboard, but I see it as because of his passion. He has stated over and over, he&39;s not a polished politician and that&39;s one thing that will come, but I have zero doubt in his ability."

"I&39;m very concerned," said George Ruzzier, 81, a longtime independent and Democrat who said Trump had moved him to vote Republican for the first time. "I have to say, stupid Republicans are holding him back."

"I think as long as he doesn&39;t do anything stupid or silly I think I&39;m probably in his camp," said Pete Evans, 49, who runs a small home-improvement business.

Evans said he was surprised by Trump&39;s defeat in Wisconsin and, as a Republican, would vote in November for whoever gets the nomination, even Cruz. "I don&39;t really care for him, but I&39;d vote for him."