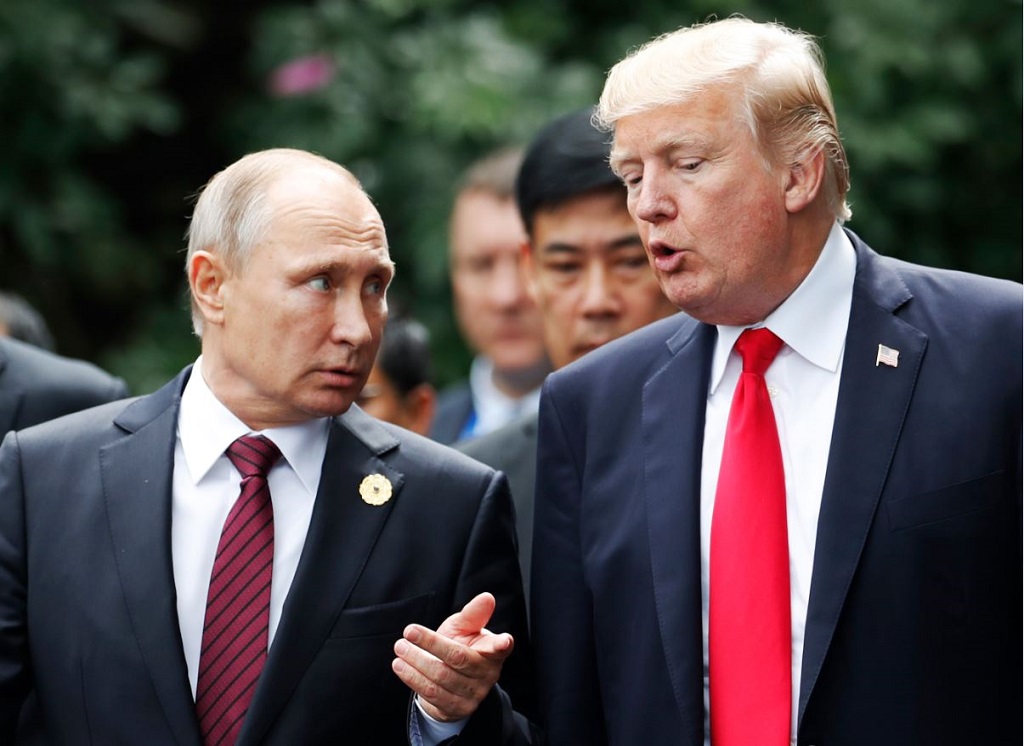 File: US President Donald Trump and Russia's President Vladimir Putin have met several times on the sidelines of multilateral gatherings, but had their first bilateral summit in the Finnish capital in July.

HELSINKI - Hours before he was due to sit down for his first ever summit with Vladimir Putin, US President Donald Trump blamed "US foolishness" for bad relations between Washington and Moscow, while the Kremlin said it expected a tough meeting.

Trump&39;s comments show how much domestic political pressure he is under over the meeting in the Finnish capital Helsinki, while the Kremlin&39;s gloomy comments reflect its belief that the fact the summit is even happening is a win for Russia.

Critics and his own advisers have urged Trump to use the summit to press Putin hard about election meddling and other “malign” activities. But hours before he was due to meet the Russian president, Trump focused his ire on his own country and the investigation into possible links between his 2016 campaign and Russia. The president has denied any collusion took place.

"Our relationship with Russia has NEVER been worse thanks to many years of US foolishness and stupidity and now, the Rigged Witch Hunt!" wrote Trump on Twitter, referring to the investigation into possible collusion.

During a breakfast meeting with Finland&39;s president before the meeting with Putin in the Finnish capital, Trump appeared upbeat. Asked what he would say to the Russian president, Trump said: "We&39;ll be just fine, thank you."

Trump also repeated his belief that predecessor Barack Obama had failed to act on Russian meddling.

While Trump has been abroad since last week, the special prosecutor investigating allegations that Russia interfered to help Trump win the 2016 presidential election indicted 12 Russians on Friday for stealing Democratic Party documents.

Trump&39;s foes at home have been scathing about his apparent refusal to criticise Putin. His 2016 opponent Hillary Clinton tweeted: "Great World Cup. Question for President Trump as he meets Putin: Do you know which team you play for?"

Neither side expects major breakthroughs from the talks and the outcome is uncertain given sharp differences between Washington and Moscow over everything from Syria to Ukraine.

For Putin, the fact that the summit is even happening despite Russia&39;s semi-pariah status among some Americans and US allies is a geopolitical win because, in Russian eyes, it shows that Washington recognises Moscow as a great power that cannot be isolated or ignored.

The Kremlin made clear beforehand it did not expect an easy meeting, taking Trump to task over his criticism of a planned Russian gas pipeline to Germany and suggesting it would be hard to find common ground on Syria because of differences over Iran.

READ: Trump baby balloon: why humour is such a powerful form of protest

Trump wants Russia to help Moscow to use its influence in Syria where it is backing President Bashar al-Assad militarily to push Iranian and Iranian-allied forces out. Kremlin spokesman Dmitry Peskov told Russia&39;s RT TV station ahead of the summit that was unlikely.

"Of course Syria will be discussed by the two presidents," said Peskov. "We all know what Washington thinks of Iran. But at the same time, Iran is a good partner to us in terms of trade, economic cooperation and political dialogue. So this will not be an easy exchange of views."

Russia hoped however that the summit would be "the first step" in overcoming a crisis in relations, he said.

"Presidents Trump and Putin respect each other and they get along well. There is no clear agenda. It will be determined by the heads of state themselves as they go along."

Trump has predicted he will be accused of being too soft on Putin no matter how the summit goes. "...If I was given the great city of Moscow as retribution for all of the sins and evils committed by Russia...I would return to criticism that it wasn’t good enough – that I should have gotten Saint Petersburg in addition!" he tweeted on Sunday.

He has said he will raise the issue of Russian election meddling with Putin but does not expect to get anywhere.

The most analysts believe the summit could yield, beyond warm words, is an agreement to begin repairing battered US-Russia relations, and maybe a deal to start talks on issues such as nuclear arms control and Syria.

READ: Protests flare up in Finnish capital ahead of Trump, Putin meeting

The two men could also agree to start restocking their respective embassies and returning confiscated diplomatic property after a wave of expulsions and retaliatory action prompted by the poisoning of a former Russian spy in Britain.

The Helsinki summit is the capstone to a nearly week-long trip for Trump during which he has sown doubts about his commitment to the NATO military alliance, Washington&39;s so-called special relationship with Britain, and US relations with the European Union that he called "a foe" on trade.

Against that backdrop and swirling uncertainty about what Trump might do or say next, his summit with Putin, which will include a one-on-one session with the Russian leader with only interpreters present, has both US allies and US politicians worried lest he makes hasty and sweeping concessions.

Some politicians in the West believe the summit is happening at one of the most crucial junctures for the West since the 1991 fall of the Soviet Union. Certain NATO allies fear Putin might seek a grand deal that would undermine the US-led transatlantic alliance.

Trump has spoken vaguely about the possibility of halting NATO war games in the Baltic region and has said repeatedly that it would be good if he could get along with Russia.

When asked last month if he would recognise Russia&39;s 2014 annexation of Ukraine&39;s Crimea, he replied: "We&39;re going to have to see."

Many Western politicians remain angry over Russia&39;s annexation of Crimea, its backing of pro-Russian separatists in Ukraine and its support for Syria&39;s Bashar al-Assad. Other accusations, denied by Moscow, include that it meddled in European politics, supplied the weapon that shot down a passenger plane in 2014 over Ukraine, and was behind the poisoning of the former Russian spy in Britain.