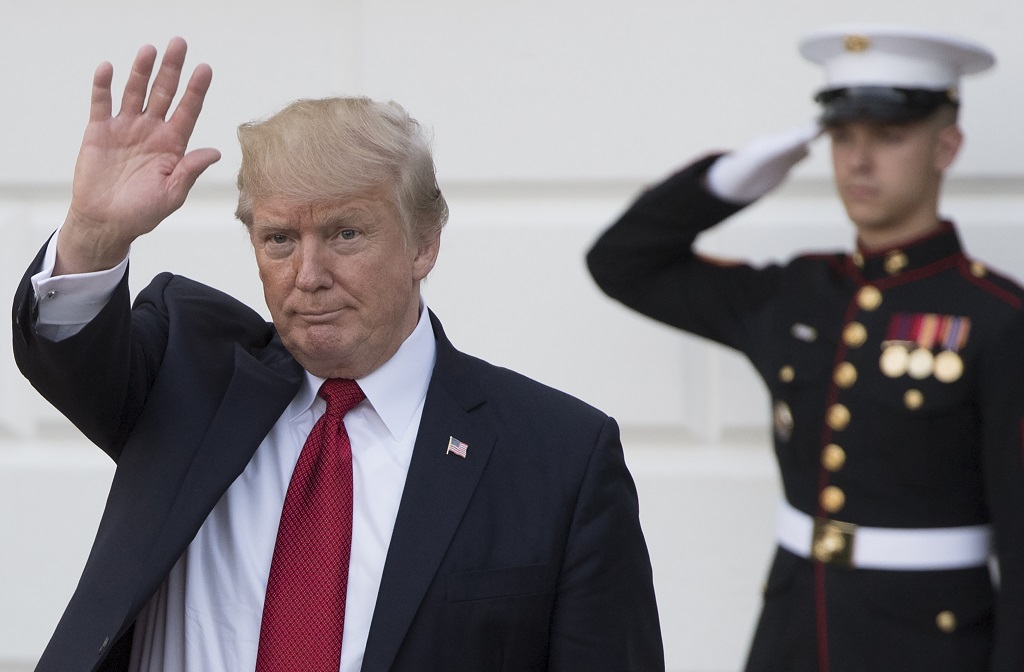 US President Donald Trump waves to the press after escorting Indian Prime Minister Narendra Modi to his car on the South Lawn of the White House in Washington, DC, June 26, 2017, following meetings and dinner.

The nine justices, who will hear arguments in the case in October, said the ban could now be enforced for travellers from the targeted countries "who lack any bona fide relationship with a person or entity in the United States."

The court tempered its ruling by saying the ban could not be implemented against people who have personal links to the US, citing the examples of foreign nationals wishing to visit family or students accepted to attend university.

But the decision nonetheless marks a win for the Republican leader, who has insisted the ban is necessary for national security, despite criticism that it singles out Muslims in violation of the US constitution.

The State Department said it would begin enforcing the travel ban "in a professional, organised and timely way" within 72 hours, in line with a memorandum signed by Trump earlier this month.

The US leader has suffered a series of judicial defeats over the ban, with two federal appeals courts maintaining injunctions on it by arguing that his executive order discriminated against travellers based on their nationality.

Reacting to Monday's ruling, Trump said he felt vindicated by what he called "a clear victory for our national security."

"As president, I cannot allow people into our country who want to do us harm," he said.

On Twitter, he later added: "Great day for America's future Security and Safety, courtesy of the US Supreme Court. I will keep fighting for the American people, & WIN!"

Trump's initial executive order - handed down without warning a week after he took office in January - triggered mayhem at airports in the United States and abroad until it was blocked by the courts less than a week later.

But rights group said they did not expect chaos this time around.

The State Department vowed to keep travellers and travel industry partners informed as it implements the order, and to keep the US Refugee Admissions Program "apprised of changes as they take effect."

Trump's revised measure, announced in March, seeks to bar from US entry travellers from Iran, Libya, Somalia, Sudan, Syria and Yemen for 90 days, as well as suspend the entry of refugees for 120 days.

The original measure also included Iraq and an indefinite ban on Syrian refugees.

Opponents welcomed the fact that the Supreme Court tempered the reach of the ban, as well as the prospect of the case being heard in the fall.

David Cole, national legal director of the American Civil Liberties Union, said the ruling's impact would be limited and the real crunch would come in October.

The judges "essentially adopted a middle course" between the government's request to uphold Trump's order and the ACLU's appeals to stay the ban, he told AFP.

"The court went out of its way to not tip its hand as to how it will rule on the ultimate issue, which is whether the president has the power to do this."

The New York Immigration Coalition, another fierce opponent, said the ruling created more confusion by using the term 'bona fide relationship,' which "agencies and individuals will struggle to make sense of."

In a ruling earlier this month, the three justices of the Ninth Circuit Court of Appeals said that "immigration, even for the president, is not a one-person show."

But the Supreme Court said the government could enforce its measure against "foreign nationals unconnected to the United States" without causing injury to the parties who filed suit.

"Groups like ISIS (the Islamic State group) and Al-Qaeda seek to sow chaos and destruction in our country, and often operate from war-torn and failed countries," he said.

"It is crucial that we properly vet those seeking to come to America from these locations, and failing to do so puts us all in danger."

The countries targeted were on a list drawn up by Barack Obama's government of places whose authorities had poor data on their own citizens, making it difficult to vet visa applicants.

While the ban did not single out Muslims, lower court judges cited Trump's repeated campaign statements that he intended to ban Muslims from entering the United States.

Even without the ban in place, arrivals from the six countries have dropped sharply, in part due to "extreme vetting" by US authorities.

Arrivals from Iran, Libya, Somalia, Sudan, Syria and Yemen were down by nearly half in March and April from a year ago, according to official data.