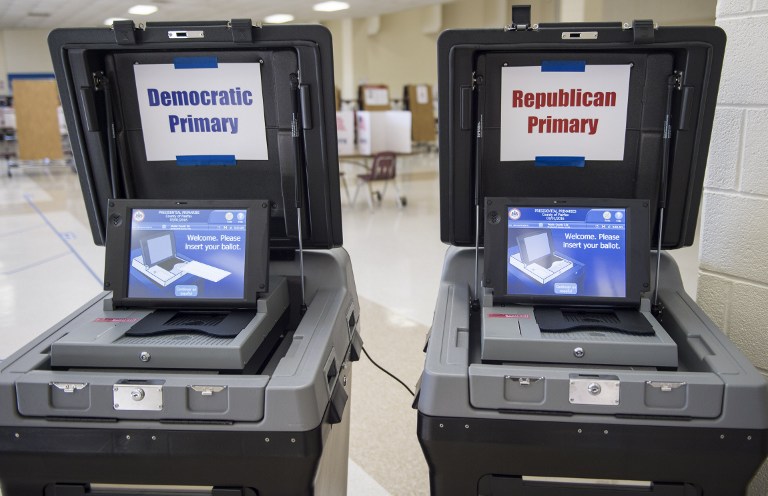 The DS-200 optical scanners used to count the votes of Fairfax County primary voters are seen at Centreville High School during the Super Tuesday primary voting in Centreville, Virginia.

ARLINGTON - Americans voted on Tuesday in what is deemed the most pivotal day of the White House primaries, with frontrunners Hillary Clinton and Donald Trump hoping to wipe out all rivals for their party nominations.

Millions of people are taking part in Super Tuesday -- a series of primary votes and caucuses in a dozen states stretching from Virginia on the east coast all the way to Alaska.

If Democrat Clinton and Republican Trump -- an outspoken billionaire who has tapped into a vein of conservative rage at conventional politics -- win big, it could spell doom for their challengers.

Polling stations opened first in Virginia where a steady stream of voters stopped to cast ballots on a day like few others on the calendar leading up to the November presidential election.

"Normally I would vote for the Democrats, but I am more afraid of Trump. I still don&39;t know how I will vote," said one woman as she walked into a voting station in Arlington.

Trump&39;s Republican rivals, Senators Marco Rubio and Ted Cruz, have been frantically trying to halt the real estate magnate&39;s march toward the nomination, seeking to unite the party against the man they see as a non-conservative political interloper.

Clinton meanwhile was riding high after thrashing rival Bernie Sanders in South Carolina over the weekend, securing an astronomical 86 percent of the African-American vote in her third win in four contests.

A new CNN/ORC poll found that either Clinton and Sanders would easily defeat Trump if the general elections were held now. If Rubio or Cruz were the Republican candidate, Clinton would face a much closer race. Strikingly, Sanders, a self-described democratic socialist, topped all three Republican candidates by wide margins, the poll showed.

Trump&39;s incendiary campaign has infuriated Republican rivals, including mainstream favourite Rubio who has intensified his personal attacks and stressed Trump would have trouble in a general election.

The Florida senator warned supporters in Tennessee that US media and Democratic groups will jump on Trump "like the hounds of hell" if he wins the nomination.

But Trump is clearly in the driver&39;s seat. He is leading in polls in at least eight of the 11 Super Tuesday states, and expanding his lead nationally with CNN/ORC giving him 49 percent support compared ahead of Rubio on 16 percent.

Cruz of Texas is third, at 15 percent, followed by retired neurosurgeon Ben Carson at 10 percent and Ohio Governor John Kasich at six percent.

Trump punched back against Rubio, calling him "Little Marco," mocking him for sweating on the campaign trail and warning that he could not stand up to strong men like Russian President Vladimir Putin.

He derided the "horrible" job his rivals have done in their home states, in an interview with Fox News Tuesday.

Trump&39;s inflammatory rhetoric, in which he has accused Mexico of sending rapists across the border, mocked women and the disabled, urged a ban on Muslims entering the country, and eagerly advocated the use of torture, would have been the undoing of a normal candidate.

But the 2016 cycle has been anything but normal, with a furious electorate keen to back an outsider who scorns the political establishment.

"I&39;m representing a lot of anger out there," Trump told CNN.

In the latest controversy, Trump came under withering criticism for not immediately disavowing the support of David Duke, who once led the Ku Klux Klan.

Some conservatives have said they will shun Trump if he is the nominee.

"This is the party of Abraham Lincoln," said Senator Ben Sasse, accusing Trump of being a non-conservative plotting a "hostile takeover" of the party.

Trump supporters "need to recognise that there are a whole bunch of other people who say, if this becomes the David Duke/Donald Trump party, there are a lot of us who are out," he told MSNBC.

If Trump sweeps the South, where many of the Super Tuesday races are taking place, it could be lights out for his Republican challengers.

Texas is the largest prize on Tuesday, and Cruz is banking on winning his home state. He trails in nearly all other Super Tuesday states.

Almost 600 Republican delegates are up for grabs Tuesday, nearly half the 1,237 needed to secure the nomination.

Some 865 Democratic delegates are at stake, 36 percent of those needed to win.