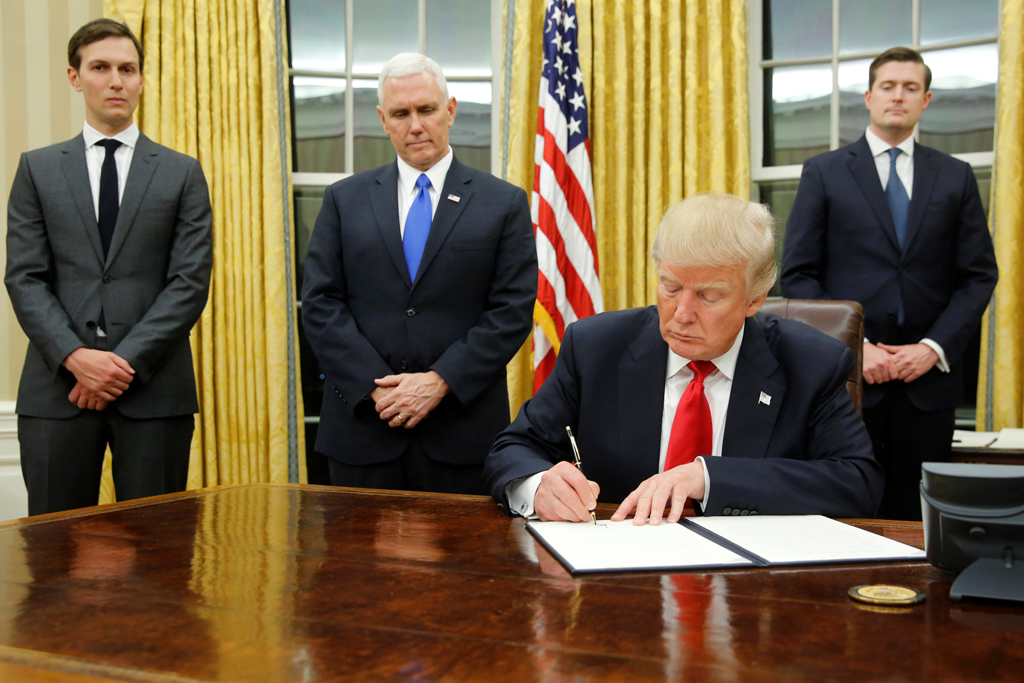 WASHINGTON - President Donald Trump directed government agencies on Friday to freeze regulations and take steps to weaken Obamacare, using his first hours in the White House to make good on a campaign promise to start dismantling his predecessor's healthcare law.

Heading into the Oval Office shortly after the conclusion of his inaugural parade, Trump signed an order on the Affordable Care Act that urged government departments to "waive, defer, grant exemptions from, or delay the implementation" of provisions that imposed fiscal burdens on states, companies or individuals.

It also called for efforts to give states greater flexibility in implementing healthcare programs while developing "a free and open market in interstate commerce for the offering of healthcare services and health insurance."

Health experts had speculated that Trump could expand exemptions from the so-called individual mandate, which requires Americans to carry insurance or face a penalty, or the requirement that employers offer coverage.

Experts also believe the administration could try to reduce the "essential benefits," such as maternity care and mental health services, that insurance plans must cover.

The White House did not provide further details about the executive order.

Trump's spokesman Sean Spicer said the White House also directed an immediate regulatory freeze for all government agencies in a memo from Trump's chief of staff, Reince Priebus. He did not offer details.

Repealing and replacing the Affordable Care Act, one of former President Barack Obama's signature laws, was a central pledge for Trump during the presidential election campaign. Republicans in the U.S. Congress have not yet laid out a plan to recast the insurance program.

In a hastily arranged ceremony, surrounded by some of his aides, Trump sat behind the presidential Resolute Desk and signed the order. He also signed commissions for his newly confirmed defense secretary, James Mattis, and his homeland security secretary, John Kelly.

Trump spoke briefly about his day with reporters. "It was busy, but good. It was a beautiful day," he said.

Vice President Mike Pence then swore in Mattis and Kelly in a separate ceremony.

There were other signs of change in the Oval Office, which Obama vacated on Friday morning. Golden drapes hung where crimson ones had earlier in the day and new furniture dotted the room.

Pres. Trump has returned the bust of Winston Churchill to the Oval Office. pic.twitter.com/LmhkQvfRpt

This wall in West Wing used to have Obama photos until earlier today. Oval Office can be seen down hallway. pic.twitter.com/3rcwifZDLy