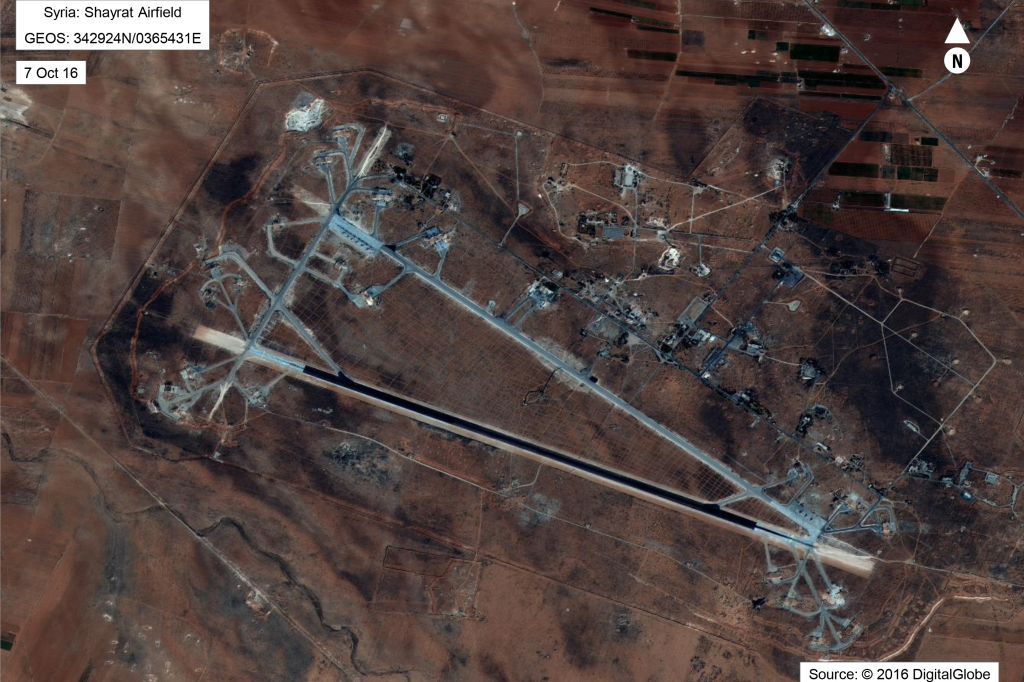 The Shayrat airfield in Syria on October 7, 2016. US President Donald Trump ordered a massive military strike on a Syrian air base on Thursday in retaliation for a "barbaric" chemical attack he blamed on President Bashar al-Assad.

In a brief televised address delivered hours after the UN Security Council failed to agree on a probe into the apparent chemical attack, Trump confirmed the first American targeted strike against Assad's regime.

Declaring it in America's "vital national security interest" to prevent the spread of deadly chemical weapons, Trump accused Assad of a "very barbaric attack" in which "even beautiful babies were cruelly murdered."

"Tonight I call on all civilised nations to join us in seeking to end this slaughter and bloodshed in Syria and also to end terrorism of all kinds and all types," Trump said.

Trump's visceral reaction to the suspected sarin attack prompted a swift and massive response, with the US firing 59 Tomahawk cruise missiles at the Shayrat Airfield at 8:40 pm Eastern Time (0040 GMT), according to officials.

The missiles were fired from the USS Porter and the USS Ross, which belong to the US Navy's Sixth Fleet and are located in the eastern Mediterranean.

The strike targeted radars, aircraft, air defense systems and other logistical components at the military base south of Homs in central Syria, from where Washington believes Tuesday's deadly strike was launched.

Syrian state television called the US strike "an act of aggression."

The governor of Homs province, where the Shayrat base is located, said the strike had caused several deaths.

"There are martyrs, but we don't yet know the number either of martyrs or of wounded," Talal Barazi told AFP by telephone.

He said parts of the base were on fire and some of the wounded were suffering from burns.

"It will take some time to determine the extent of the damages," he said.

"Of course we condemn this, all action targeting Syrian military bases is condemnable," Barazi said.

He said the forces present at the base "provide important support" in the battle against the Islamic State group in the Palmyra region, home to a famed desert city that Syrian troops recaptured from jihadists last month.

The swift US military action against the Assad regime marks a stunning development in Syria's brutal, six-year conflict and a sudden about-face for Trump.

It came despite a warning from Russia of potential "negative consequences" if Washington strikes Syria.

Secretary of State Rex Tillerson accused Russia -- which props up the Assad regime and agreed to mothball Syrian chemical weapons in a 2013 deal  -- of being incompetent or complicit in permitting Assad's actions.

A White House official said that Tillerson and Secretary of Defense Jim Mattis had liaised with allies about the military strike.

Trump, who is currently hosting Xi Jinping at his Mar-a-Lago resort, informed the Chinese leader personally.

But there was no such warning for President Vladimir Putin. Instead Russian military officials in Syria were informed of the strikes beforehand in order to avoid casualties that could prompt a broader crisis.

White House and military officials at Mar-a-Lago watched this first major military and foreign policy gambit of Trump administration from a stuffy tent that served as the temporary Sensitive Compartmented Information Facility -- or SCIF.

The White House was quick to paint the decision as limited to deterring the use of chemical weapons, and not part of a broader military campaign to remove Assad by force.

"The intent was to deter the regime from doing this again, and it is certainly our hope that this has had that effect," Pentagon spokesman Navy Captain Jeff Davis told reporters.

"It will be the regime's choice if there's any more (strikes) and it will be based upon their conduct going forward."

But the strike will send ripples around the world, from Pyongyang to Tehran, as nations and leaders take the measure of the neophyte but often bellicose president.

The timing of the strike, during a meeting with President Xi, will give weight to Trump's threats to deal with North Korea's nuclear and missile programs unilaterally if necessary.

That is a point of contention with Beijing, which would rather go softly-softly with its volatile neighbor.

Tillerson said the attack should leave no one in any doubt that Trump is willing to act if any actor "crosses the line."

The US top diplomat had earlier vowed an "appropriate response" to the attack in Khan Sheikhun in rebel-held Idlib province, which killed at least 86 people, including 27 children, and injured more than 500.

Trump is likely to face questions from Congress about the legality of the strike, which unlike previous attacks against Islamic State group targets in Syria, targeted the Syrian regime and could be considered an act of war.

One official pointed to Article two of the constitution, which allows the president to use force to defend the US national interest.

The fast-moving events come just days after the Trump administration had signaled it was no longer seeking the Syrian leader's departure from power.

The Khan Sheikhun attack appears to have marked a turning point.

On Wednesday Trump decried the attack as an "affront to humanity." He seemed horrified by photographs showing dead children and victims suffering convulsions and foaming at the mouth.

"It crossed a lot of lines for me," Trump said, alluding to Barack Obama's failure to enforce his own "red line" on the use of chemical weapons in Syria four years ago.

In 2013, Trump had urged then-president Obama not to intervene against Assad.

In a startling about-turn, Tillerson called Thursday for "a political process that would lead to Assad leaving" and said his future role in the country was "uncertain."

"The Syrian army has not, did not and will not use this kind of weapons -- not just against our own people, but even against the terrorists that attack our civilians with their mortar rounds," he said.