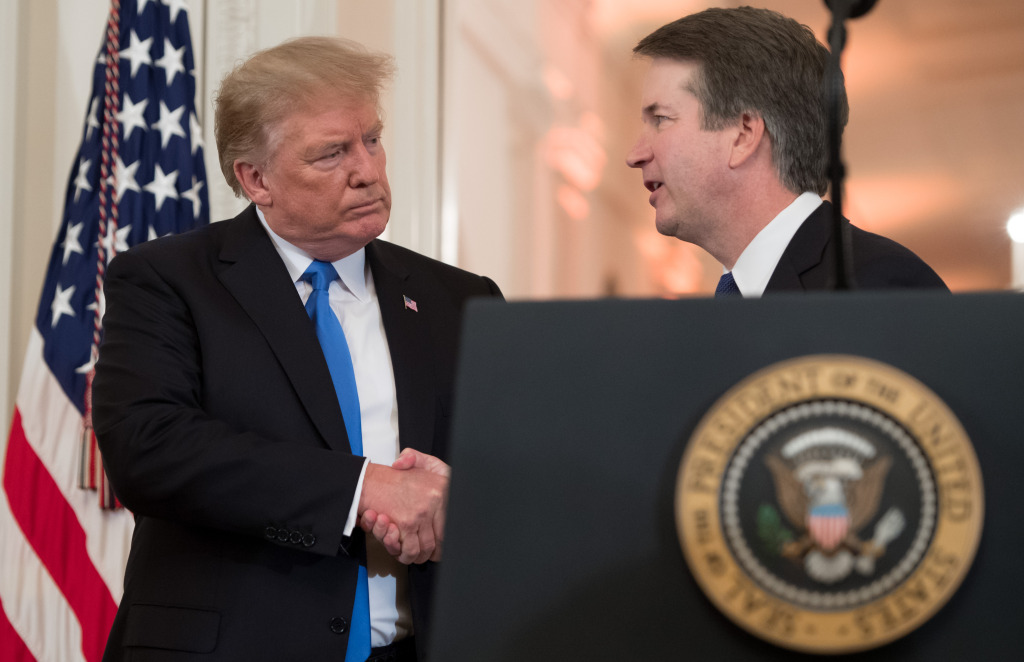 US President Donald Trump (L) shakes hands with US Judge Brett Kavanaugh after nominating him to the Supreme Court in the East Room of the White House on July 9, 2018 in Washington, DC.

WASHINGTON - President Donald Trump on Monday nominated conservative judge Brett Kavanaugh to the US Supreme Court, a decision likely to cement a rightward tilt on the top judicial body with momentous implications for American society.

Trump&39;s decision stands to be among the most consequential of his presidency as he seeks to shape the high court to his conservative leanings for decades to come. With Kavanaugh a mere 53 years old, he could serve for a generation or more.

"Judge Kavanaugh has impeccable credentials, unsurpassed qualifications, and a proven commitment to equal justice under the law," Trump said as he introduced his nominee in a prime-time address from the White House, praising him as "one of the finest and sharpest legal minds of our time".

After days spent teasing his highly-anticipated decision, Trump ended up picking a jurist with extended federal bench and administration experience to fill the vacancy left by retiring Justice Anthony Kennedy.

Kavanaugh worked for president George W. Bush, who appointed him in 2003 to the US Court of Appeals in Washington -- where he was finally confirmed by the Senate in 2006 after years of Democratic obstruction.

He is also a robust supporter of the executive power of the presidency.

Kennedy was long a swing vote on the nine-member court, and Trump&39;s choice -- his second opportunity in 18 months to fill a Supreme Court seat -- stands to dramatically affect many aspects of American life, from abortion to voting rights to immigration.

While conservative on firearms and election financing, Kennedy showed a more progressive streak on issues such as abortion and affirmative action. An example of this came in 2015, when, thanks to him, same-sex marriage was legalised across the United States.

Tonight, it was my honor and privilege to nominate Judge Brett Kavanaugh to the United States Supreme Court. SCOTUS pic.twitter.com/97clc9zifm

But Kavanaugh, who grew up in Washington as the son of a schoolteacher, has the reputation of a staunch conservative, one who many Republicans no doubt hope could help overturn Roe v Wade, the landmark 1973 decision that guarantees women the right to an abortion.

He has ruled on hundreds of cases and contributed to prosecutor Kenneth Starr&39;s report into president Bill Clinton&39;s affair with White House intern Monica Lewinsky, which outlined several grounds for Clinton&39;s impeachment.

Later he was part of Bush&39;s legal team working on the 2000 Florida recount, which resulted in Bush winning the presidency.

Kavanaugh recently voiced disagreement with a court decision allowing an undocumented teenage immigrant to get an abortion.

The nominee made no mention of his leanings in brief remarks at the White House, where he was joined by his wife and their two daughters.

"My judicial philosophy is straightforward. A judge must be independent and must interpret the law, not make the law," he told the assembled dignitaries, as Trump beamed.

"I believe that an independent judiciary is the crown jewel of our constitutional republic. If confirmed by the Senate... I will always strive to preserve the constitution of the United States and the American rule of law."

Kavanaugh heads to Capitol Hill this week to make his case for confirmation, and he will face deep scepticism and outright opposition from most if not all Democrats.

The minority party -- unable to block the nominee unless they lure some Republican senators to their side -- have stressed the high stakes of the president&39;s decision as they prepare for the confirmation battle ahead.

Judge Brett Kavanaugh: "My judicial philosophy is straightforward— a judge must be independent and must interpret the law, not make the law." https://t.co/lJ9LKFwsIh pic.twitter.com/5Sz34WMp6h

Schumer and other Democratic senators have blasted Trump for having chosen Kavanaugh from a list pre-approved by rightwing outside groups, including the conservative Federalist Society.

Liberal Democratic Senator Bernie Sanders said in a tweet that if Kavanaugh is confirmed "it will have a profoundly negative effect on workers&39; rights, women&39;s rights and voting rights for decades to come. We must do everything we can to stop this nomination."

He said Kavanaugh has "impeccable credentials & a strong record of upholding the Constitution. He is widely respected as a fair, independent & mainstream judge.

"I look forward to the Senate moving forward with a fair & thorough confirmation process," McCain tweeted.

The Senate&39;s top Republican, Majority Leader Mitch McConnell, hailed a "superb choice" in Kavanaugh and urged senators to "put partisanship aside and consider his legal qualifications with the fairness, respect, and seriousness that a Supreme Court nomination ought to command."

Democrats have sounded the alarm that by shifting the ideological balance of the top court Trump could place women&39;s reproductive rights, health care and LGBT rights at risk, and demonstrators gathered at the Supreme Court Monday night in protest at the nomination.

Trump indeed said during the 2016 campaign that he would put "pro-life justices on the court", thrilling his grassroots base although polls show most Americans support abortion rights.