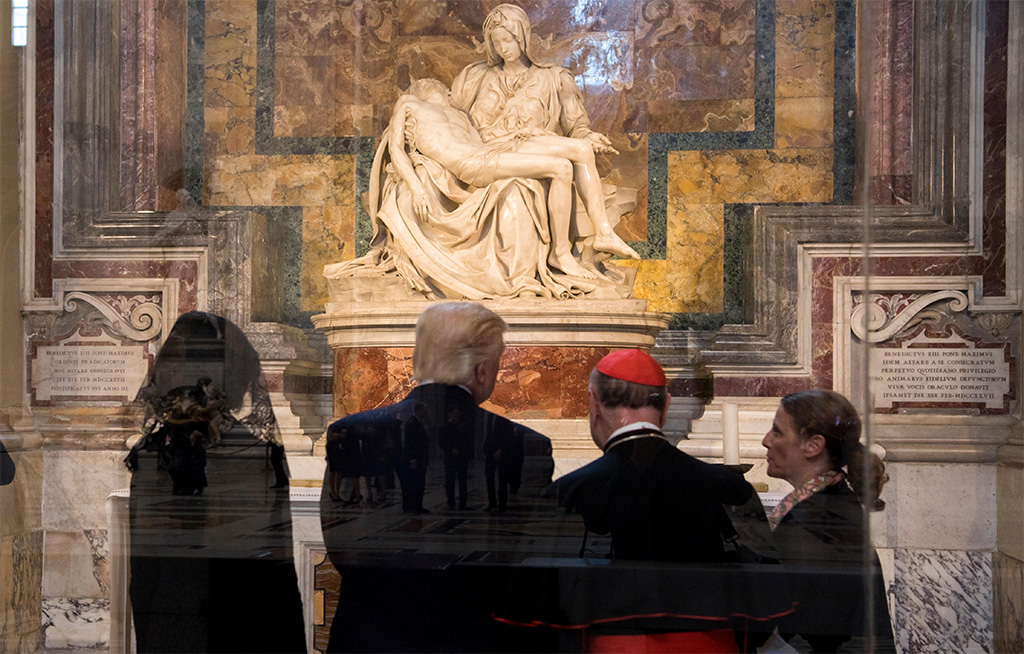 This handout picture released by the Vatican press office shows US President Donald Trump during a visit of Vatican's museum following a private audience with Pope Francis on May 24, 2017 at the Vatican. Photo: HO / OSSERVATORE ROMANO / AFP

BELGIUM - Donald Trump vowed Wednesday to use his US presidency to promote global peace after meeting Pope Francis, before heading into a high-stakes summit of the world's biggest military alliance.

Meeting for the first time, the president and the pontiff sidestepped deep differences over issues ranging from the environment to the plight of migrants and the poor.

"Honor of a lifetime to meet His Holiness Pope Francis," a star-struck Trump wrote on Twitter before leaving Rome for Brussels and the next leg of his first overseas trip as US president.

"I leave the Vatican more determined than ever to pursue PEACE in our world," the billionaire former reality TV star said.

In Brussels, a city he once dubbed a "hellhole", Trump however faced thousands of protesters ahead of his first summits on Thursday with wary leaders of NATO and the European Union.

Trump sparked fears of an end to the transatlantic alliance when he dismissed NATO as "obsolete" while on the campaign trail and mortified the EU by backing Brexit.

Trump said that the most important issue during his time in Belgium was terrorism after the "horrible situation" in Manchester, England, where a suicide bomber killed 22 people in an attack claimed by the Islamic State.

Trump had left Rome declaring his determination for peace following his keenly anticipated encounter with Pope Francis, the 80-year-old former Jesuit priest who has made championing the poor and the third world major themes of his papacy.

In their world view and tastes, the Argentine pontiff who eschews the use of the palaces at his disposal and the luxury hotel tycoon appear worlds apart.

But despite the pope looking initially grim-faced, both men ended up mostly all smiles, relaxed and even jovial.

Accompanied by his wife Melania and daughter Ivanka, Trump met Francis in the private library of the Apostolic Palace, the lavish papal residence that the current pope eschews in favour of more modest lodgings.

"He is something," Trump later said of his host. "We had a fantastic meeting."

There was even a light-hearted moment when Francis made an apparent allusion to Trump's imposing physical size.

"What do you feed him on? Potica?" Francis asked Melania, in a reference to a calorie-laden cake that comes from her native Slovenia and is pronounced "potteezza". Reporters initially thought he said "pizza".

Trump also told the pope he was committing more than $300 million (270 million euros) to help prevent or tackle famine in Yemen and several countries in Africa.

The Vatican described the discussions as "cordial" and emphasised the two men's joint opposition to abortion and shared concern for persecuted Christians in the Middle East.

The pope presented Trump with a medallion engraved with an olive tree, the international symbol of peace.

Francis also gave Trump copies of the three major texts he has published as pope, including one on the environment which urges the industrialised world to curb carbon emissions or risk catastrophic consequences for the planet.

Trump, who has threatened to ignore the Paris accords on emissions and described global warming as a hoax, vowed to read them.

'An instrument of peace'

Trump told his host as he left, "Thank you. Thank you. I won't forget what you said."

"I give it to you so you can be an instrument of peace," the pope said in Spanish. "We can use peace," Trump replied.

Trump's gifts included a collection of first editions by Martin Luther King and a bronze sculpture.

A Vatican statement on the meeting highlighted "the joint commitment in favour of life, and freedom of worship and conscience."

Afterwards, the US first couple were given a private tour of the Sistine Chapel and St Peter's Basilica.

In Brussels, Trump met Belgium's King Philippe and Queen Mathilde and held talks with Michel, while around 6,000 people rallied against his policies in the centre of the city.

He will then hold his first summit with NATO leaders, who are holding out for a public show of Trump's commitment in return for joining the US-led coalition against Islamic State in the wake of the Manchester attacks.

Trump's Vatican visit was the third leg of his overseas trip, after stops in Saudi Arabia and Israel and the Palestinian territories.

The high-profile trip has diverted attention from Trump's domestic pressures over alleged campaign collusion with Russia.