Trump: Republican should 'step aside' if sex abuse claims true 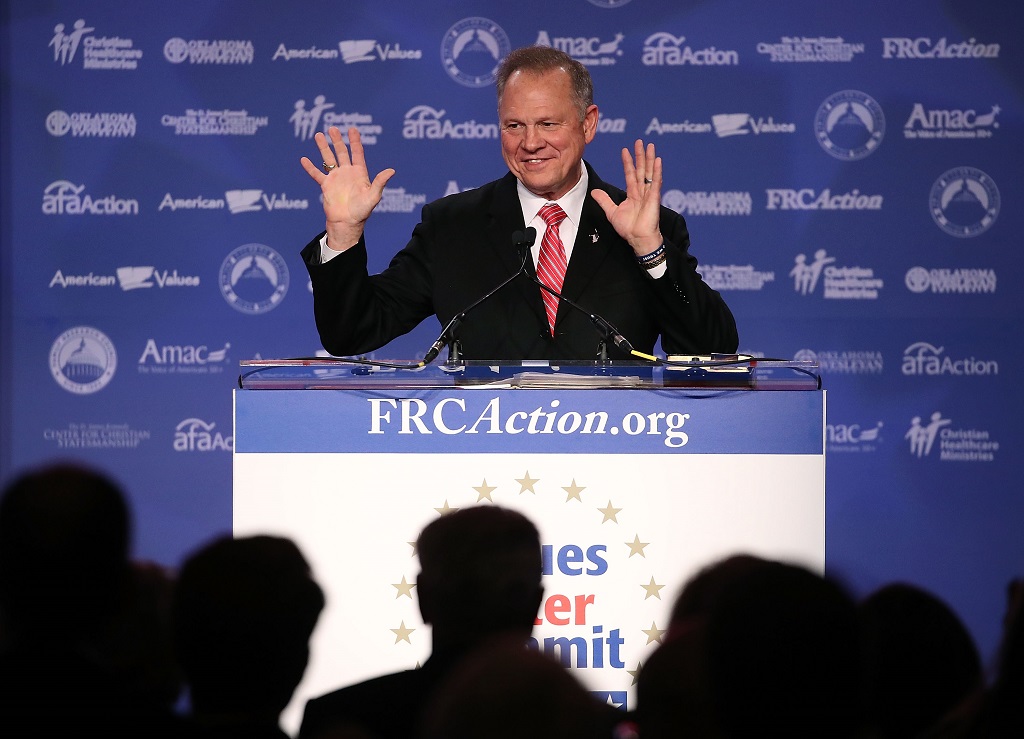 WASHINGTON - US President Donald Trump believes a Republican Senate candidate should step aside if claims he sexually abused a 14-year-old girl are proven true, but also that a mere allegation should not destroy the Alabama politician&39;s life, according to the White House.

Roy Moore, a former state judge and Christian evangelical whose defence of a Ten Commandments display brought him national attention, has denied any impropriety.

"Like most Americans the president believes we cannot allow a mere allegation, in this case one from many years ago, to destroy a person&39;s life," White House press secretary Sarah Sanders said aboard Air Force One, before the president landed in Vietnam for a summit.

"However, the president also believes that if these allegations are true, Judge Moore will do the right thing and step aside," she said.

Four women, speaking on the record, told The Washington Post that Moore pursued them when they were 18 or younger and he was in his early thirties, working as an assistant district attorney.

According to the Post, Leigh Corfman, now 53, said that when she was 14 Moore took her into his house in the woods near Gadsden, Alabama, removed her shirt and pants, and fondled her over her bra and underpants.

Moore guided her to touch him through his underwear, she said.

On Twitter he said he was under attack from the "Obama-Clinton Machine&39;s liberal media lapdogs".

The Obama-Clinton Machine’s liberal media lapdogs just launched the most vicious and nasty round of attacks against me I’ve EVER faced!

We are are in the midst of a spiritual battle with those who want to silence our message. (1/4) ALSen

"I will NEVER GIVE UP the fight," he wrote.

In an email to his supporters, Moore&39;s campaign called the Post story "fake news" and said the allegations "would have been made public long before now" if they were true.

Moore, an anti-establishment conservative, faces Democrat Doug Jones in a special Senate election on 12 December to replace Jeff Sessions, who is now US attorney-general.

The accusations by the four women reverberated through Washington.

"If these allegations are true, he must step aside," Senate Majority Leader Mitch McConnell said. At least a dozen other Republicans followed suit.

The allegations against Roy Moore are deeply disturbing and disqualifying. He should immediately step aside and allow the people of Alabama to elect a candidate they can be proud of.

But in Alabama, state auditor Jim Zeigler brushed off the allegations.

He told the Washington Examiner "there is nothing to see here" -- and referred to the Bible as a defence.

"Take Joseph and Mary. Mary was a teenager and Joseph was an adult carpenter. They became parents of Jesus," Zeigler told the conservative news outlet. "There&39;s just nothing immoral or illegal here."

Experts have told US media that Alabama&39;s Republican Party or Moore himself could withdraw his name from consideration.

How that happens remained unclear. Alabama law prohibits replacement of a candidate up to 76 days before the election, meaning Moore&39;s name will likely be on the ballot when Alabamians vote next month.

The natural replacement would be Luther Strange, the incumbent senator appointed to succeed Sessions, and whom Moore defeated in the party&39;s September primary.

Strange had been Trump&39;s pick in the primary.

The Post said it interviewed more than 30 people, including mothers and friends of the girls.

It detailed how Gloria Thacker Deason was 18 in 1979 when she and 32-year-old Moore began going on dates on which they hugged and kissed, she told the Post.

Another woman, Wendy Miller, said she first met Moore when she was dressed as an elf and working as a Santa&39;s helper at a shopping mall.

Later, in the presence of her mother, he asked her out on dates when she was 16. Her mother said no, and Miller said she realized years later that the idea of a grown man wanting to date a teenager was "disgusting."

Moore could have faced prison time, but the statute of limitations has expired, the Post reported.

Moore had a controversial career as a judge, notably for refusing to remove a statue of the Ten Commandments in his courthouse.