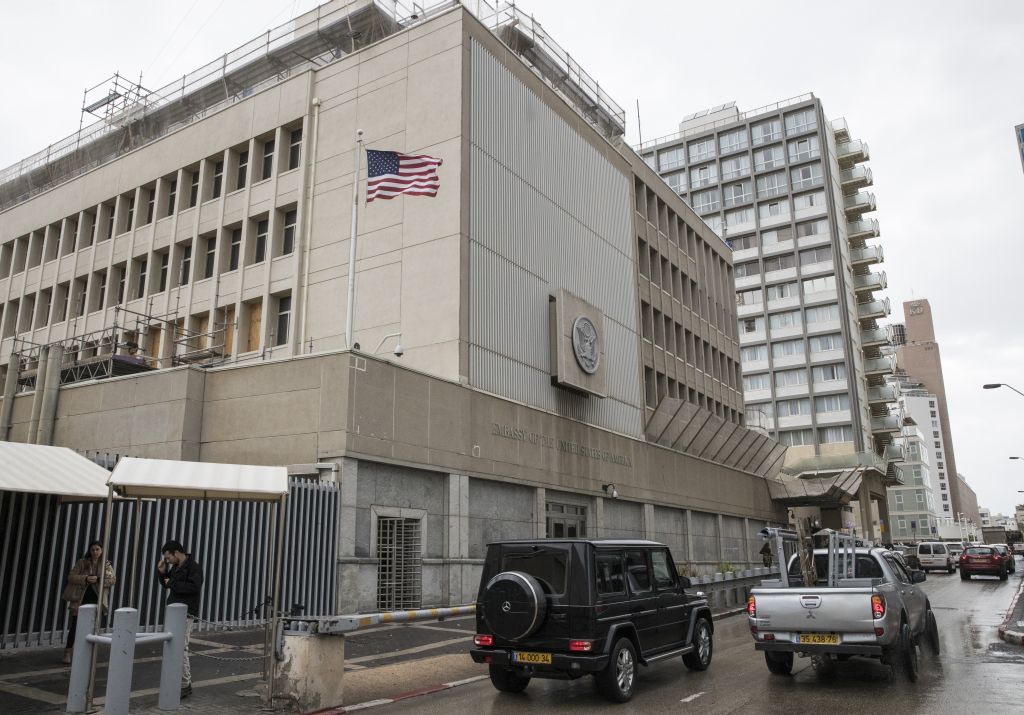 A picture shows the exterior of the US embassy in Tel Aviv on December 6, 2017. President Donald Trump is set to recognise Jerusalem as Israel's capital, upending decades of careful US policy and ignoring dire warnings from Arab and Western allies.

JERUSALEM – US President Donald Trump was set to recognise Jerusalem as Israel&39;s capital later on Wednesday in a move that would upturn decades of precedent and run counter to international consensus.

The city is revered by three major faiths but mired in political, as well as religious, disputes. Its status is one of the thorniest issues of the Israeli-Palestinian conflict.

Jewish Israelis consider Jerusalem to be their 3,000-year-old capital and the inalienable birthright of Jews everywhere. Since the destruction in ancient times of two separate Jewish temples in the city and the exile of the Holy Land&39;s surviving Hebrews, Judaism has looked for a return of its people to their biblical home. According to scripture, King David made Jerusalem the capital of a unified kingdom of Israel around 1000 BC.

The city&39;s heavily visited Western Wall is among the last remnants of the second Jewish temple, destroyed by the Romans in 70 AD.

The Palestinians, who make up about a third of the modern city&39;s population of some 882,000, claim east Jerusalem as the capital of the state to which they aspire. It also has great religious significance for Muslims as it houses the Al-Aqsa mosque complex, Islam&39;s third-holiest site, and the emblematic gold-topped Dome of the Rock.

READ: Trump warned of moving US embassy to Jerusalem

While Palestinians have been divided in recent years between president Mahmud Abbas&39;s Fatah and Islamist movement Hamas, Jerusalem remains one of their most powerful rallying points for both religious and nationalistic reasons.

The city is also home to the holiest sites in Christianity, including the Church of the Holy Sepulchre, built on the site where most Christians believe Jesus was crucified and buried.

A 1947 United Nations plan prescribed partitioning British-run Palestine into three separate entities: a Jewish state, an Arab state and a separate enclave, or "corpus separatum", consisting of Jerusalem, nearby Bethlehem and holy places in the vicinity to be under UN control. The proposal was accepted by Zionist leaders but rejected by the Arabs.

Following the departure of the British in 1948, the Jews declared an independent state of Israel, followed by fighting with Palestinians and neighbouring Arab states.

At the end of the war, east Jerusalem was in Jordanian hands while the new Jewish state set up its capital in the west.

The two sides were divided by barbed wire, sandbags and machinegun emplacements until the Six-Day War of 1967, when Israel seized and occupied the eastern zone.

It declared the whole city its eternal and united capital and in 1980 annexed east Jerusalem, a move never recognised by the international community.

They all relocated to Tel Aviv, where other states had their legations.

Costa Rica and El Salvador returned to the city in 1984 but headed back to Tel Aviv in 2006.

In 1995, the US Congress passed an act stating "Jerusalem should be recognised as the capital of the State of Israel and the United States embassy in Israel should be established in Jerusalem no later than May 31, 1999."

Since then, implementation has been blocked by successive US presidents.

Trump vowed during his election campaign to move the embassy from Tel Aviv to Jerusalem and to recognise the disputed city as Israel&39;s capital.

He is due to partially fulfil that pledge on Wednesday, declaring Jerusalem Israel&39;s capital, but only declaring his intent to move the embassy there, which could take years.

The traditional US position on the city has been that Jerusalem&39;s status must be negotiated between the two sides.