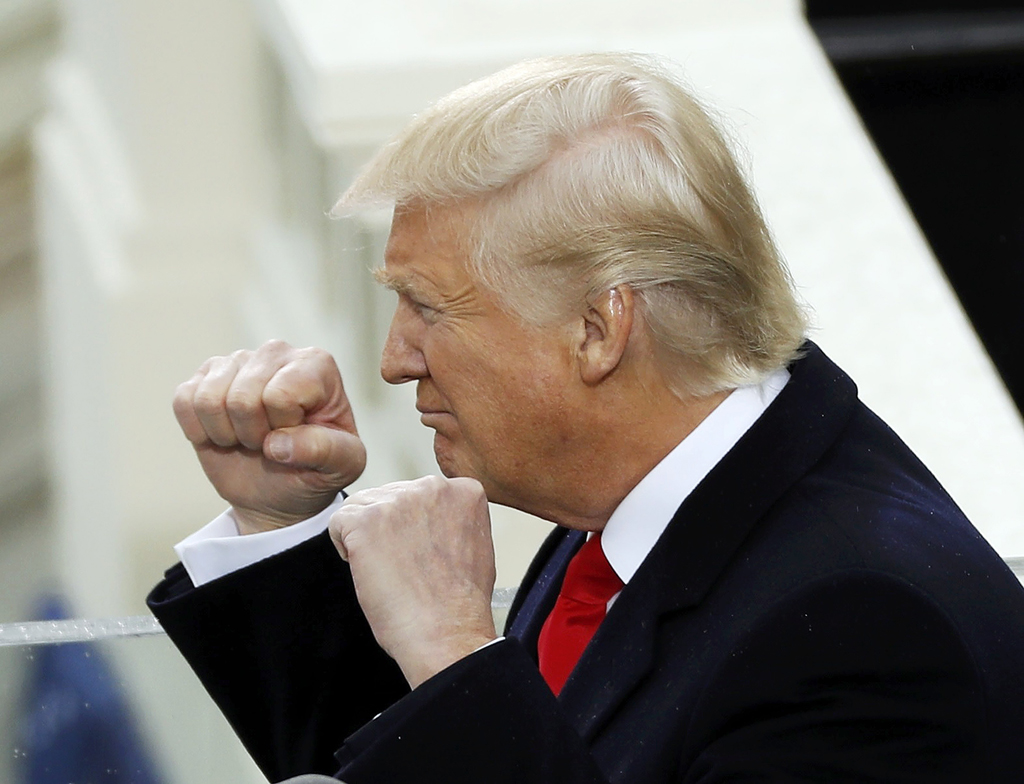 US President Donald Trump gestures after taking the oath of office during his inauguration at the US Capitol in Washington, US, January 20, 2017.

WASHINGTON – US President Donald Trump is set to take a first step toward enacting his pledge to "build a wall" on the Mexican border as he rolls out a series of immigration-related decrees on Wednesday.

The White House said that Trump will make the announcements in a visit to the Department of Homeland Security in the afternoon.

Big day planned on NATIONAL SECURITY tomorrow. Among many other things, we will build the wall!

Trump will also sign a measure targeting "sanctuary" cities where local officials refuse to help round up people for deportation, The Washington Post reported. CNN said he also plans to expand the number of customs and border agents.

Stemming immigration was a central plank of Trump's election campaign and his signature policy was to build a wall across the 3,200km border between the United States and Mexico.

Some of the border is already fenced, but Trump says a wall is needed to stop illegal immigrants entering from Latin America.

Experts have voiced doubts about whether a wall would actually stem illegal immigration, or if it is worth spending billions on a wall when there are cheaper methods, such as electronic surveillance, of achieving similar results.

But a border wall has become a clarion call for the US right and far-right, the core of Trump's support.

Still, any action from the White House would be piecemeal, diverting only existing funds toward the project.

The Republican-controlled Congress would need to supply new money if the wall is to be anywhere near completed, and Trump's party has spent decades preaching fiscal prudence.

Furthermore, much of the land needed to build the wall is privately owned, implying lengthy legal proceedings, political blowback, and substantial expropriation payments.

Homeland Security Secretary John Kelly even told his confirmation hearing that the border wall might not "be built anytime soon".

Trump had promised to make "Mexico pay" for the wall, something that the Mexican government has repeatedly said it will not do.

Another threat is to finance the wall by tapping into remittances that Mexican migrants sent home, which last year amounted to $25-billion (R331,68bn).

By coincidence, Mexican foreign minister Luis Videgaray and the country's economy minister are in Washington to prepare a visit by President Enrique Pena Nieto scheduled for January 31.

"There are very clear red lines that must be drawn from the start," Economy Minister Ildefonso Guajardo told the Televisa network in Mexico just ahead of the trip.

Asked whether the Mexico would walk away from talks if the wall and remittances are an issue, Guajardo said: "Absolutely".

Trump also wants to renegotiate the North American Free Trade Agreement (Nafta) with Mexico and Canada, warning last week that he would abandon the pact unless the United States gets "a fair deal".

Mexico has said it is willing to "modernise" the pact, which came into force in 1994 and represents $531 billion in annual trade between Mexico and the United States.

Some 80 percent of Mexico's exports go to the US market.

Trump has also floated the idea of a ban on Muslims coming to the United States.

Trump this week is set to slash the number of refugees allowed to resettle in the United States, according to the New York Times, particularly from Syria and other Muslim-majority countries.

Around 4,8 million Syrians have fled to neighbouring countries alone, according to the United Nations.

An estimated 18,000 Syrians have fled to the United States.

Former officials said Trump could slow the process down by moving resources away from processing visa requests, or cut migrant quotas and programmes.

The orders would restrict immigration and access to the United States for refugees and visa holders from Iraq, Iran, Libya, Somalia, Sudan, Syria and Yemen, according to the Washington Post.

Citizens from those countries already face large obstacles in obtaining US visas.

But the move has prompted a fierce backlash even before it was announced.

"Donald Trump is making good on the most shameful and discriminatory promises he made on the campaign trail," said Trita Parsi of the National Iranian American Council. Iran was one of the countries that may be listed.

"He called for a Muslim ban and is now taking the first steps to implement one. This will not stand. The American people are better than this."