Trump travel ban back in court 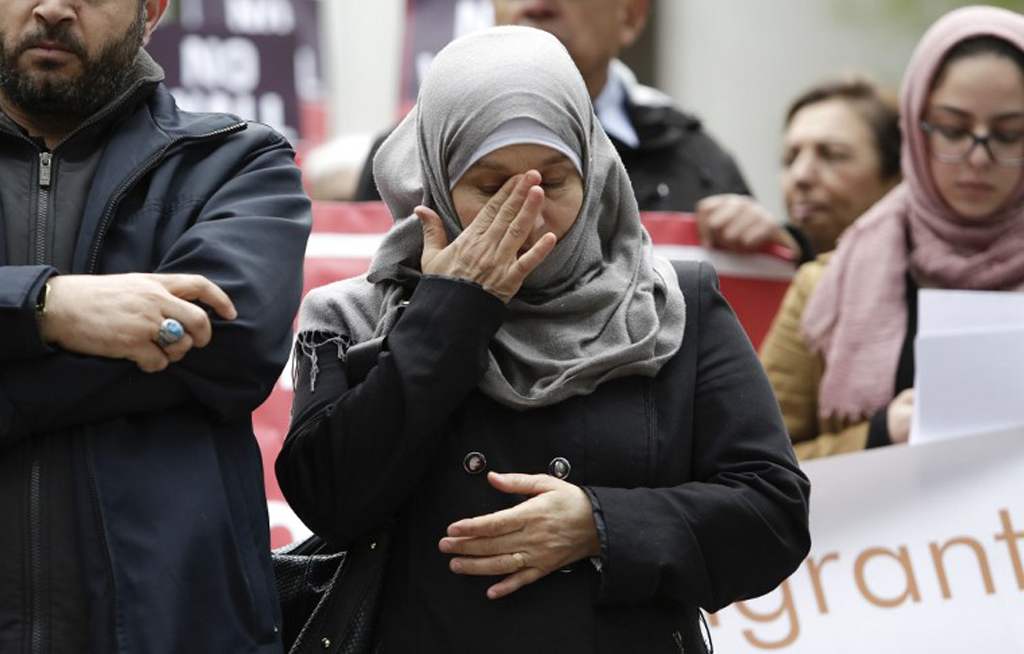 Syrian refugee Jamila Al-Mustafa wipes her eyes as her husband tells their story to a group protesting US President Donald Trump's revised travel ban outside the US Court of Appeals, Washington on May 15, 2017. Photo: Jason Redmond / AFP

WASHINGTON - A US government attorney insisted Monday that President Donald Trump's revised travel ban did not unfairly target Muslims, in the latest twist in a months-long legal battle that has dogged the new US administration.

Crowd rallied in protest outside an appeals court in the western city of Seattle where a panel of federal judges was weighing the legality of the contested immigration order -- which has twice been blocked by the courts since January.

The Trump administration says the temporary ban on refugees as well as travelers from six Muslim-majority countries, Iran, Syria, Sudan, Libya, Somalia and Yemen, is motivated by national security concerns, an area where US president have wide powers.

But a Hawaii-based judge in March issued a preliminary injunction, which applies nationwide, against the order on grounds it was unconstitutional and motivated by anti-Muslim bias.

Now, three judges from the US 9th Circuit Court of Appeals are considering Trump's challenge of that injunction.

The government's lawyer Jeffrey Wall reiterated on Monday that Trump's campaign trail rhetoric against Muslims should not be taken into account by the judges, who appeared skeptical.

Monday's hearing came a week after a federal court in Maryland heard arguments on whether to uphold a separate judge's decision blocking the ban.

In both cases, debate hinged on the question of Trump's intent since the US Constitution forbids religious discrimination.

Wall told the Seattle judges said that Trump had clarified over time that "what he was talking about was Islamic terrorist groups and the countries that sponsor or shelter them."

He also argued that the ban was not based on religion and that those challenging it , the state of Hawaii and an Imam, have no standing in the case.

Neal Katyal, the attorney representing Hawaii, countered those arguments, saying Trump had clearly singled out Muslims and that his campaign rhetoric remained relevant today, as did new comments made since his election.

"We have not seen anything like this in our lifetime in which a president is establishing a disfavored religion," Katyal said.

"The government has not engaged in mass, dragnet exclusions in the past 50 years," he added. "This is something new and unusual in which you're saying this whole class of people, some of whom are dangerous, we can ban them all."

Katyal said that Congress had set rules on vetting foreigners before they enter the United States and that Trump could not claim sweeping powers and take a "magic eraser" to long-standing policies.

The scope of Trump's revamped ban, signed in early March, was toned down from its original version in January which blocked travelers from seven-majority Muslim countries, including Iraq, as well as all refugees.

Judge compares Trump's Muslim ban to one of the worst chapters in American history https://t.co/pNNd46okGi pic.twitter.com/EK87VAcvjA

The first decree, which prompted mass protests and sowed chaos at US airports, was blocked on grounds it violated the constitutional ban on religious discrimination, a ruling upheld on appeal.

The modified version removed Iraq from the ban, but ran into the same objections.

The latest ban closes US borders to citizens from six countries for 90 days. It also suspends the nation's refugee program for 120 days.

More than a dozen states have joined Hawaii in challenging the ban and the case is expected to reach the Supreme Court.