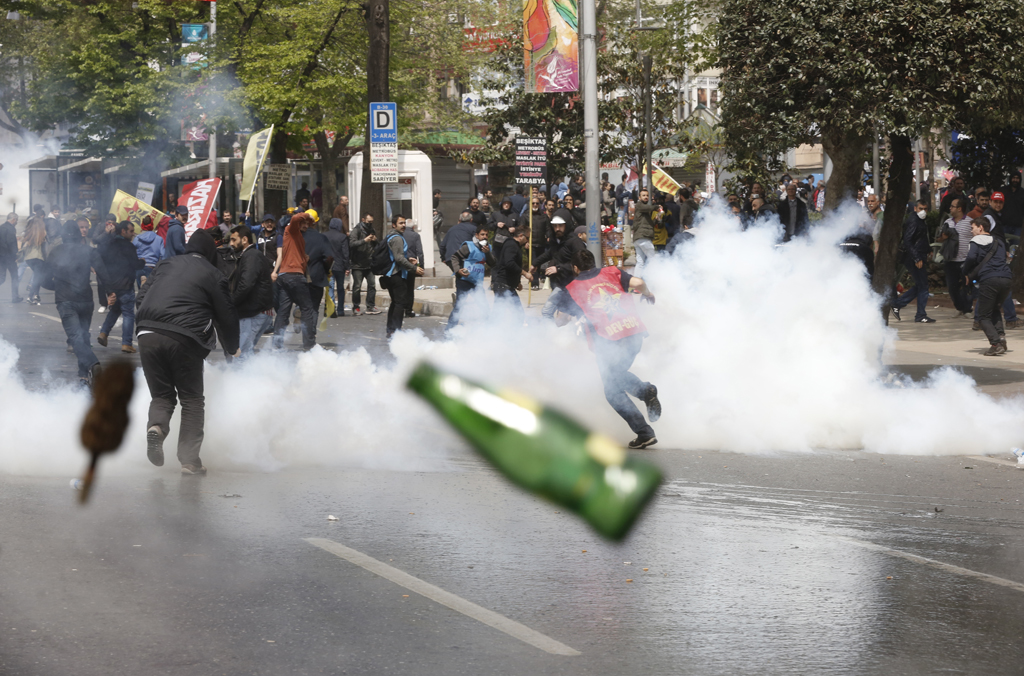 Turkish protestors clash with riot police as police use water cannon and tear gas to disperse protestors during a May Day rally in Istanbul, Turkey, 01 May 2015.

ISTANBUL - Turkish police fired tear gas and water cannon at hundreds of stone-throwing May Day protesters on Friday, after they defied a ban and tried to march on Istanbul&39;s Taksim Square.

Europe&39;s biggest city was under a security lockdown as thousands of police manned barricades and closed streets to stop demonstrations at Taksim, a traditional rallying ground for leftists that saw weeks of unrest in 2013.

Riot police unleashed water cannon and chased protesters down sidestreets in the nearby Besiktas neighbourhood, where they fired off canisters of tear gas, according to a Reuters reporter at the scene.

Several people were detained after demonstrators lobbed stones and bottles at police and set off fireworks. Citing security concerns, much of Istanbul&39;s public transport had been shut down and police helicopters circled over the city.

Tens of thousands also gathered to march in the capital Ankara, where the mood was more festive, with dancing and singing.

Critics say President Tayyip Erdogan and the government have become more authoritarian in the buildup to June elections.

"People want to express their problems but the government doesn&39;t want those problems to be heard ahead of elections," opposition politician Mahmut Tanal, holding a pocket-sized book of the Turkish constitution, told Reuters in Istanbul.

A usually bustling square lined with cafes and hotels, Taksim was filled with police buses, ambulances and satellite broadcast trucks. A pair of tourists emerged from a hotel to find the area sealed off and nervously made their way around police lines.

The government had said Taksim would only be open to those who came peacefully and not for "illegal demonstrations".

"I wish May 1 to be celebrated in a festive mood without provocations," Erdogan said in a statement.

A masked protester holds a Molotov cocktail during clashes with police in Okmeydani neighbourhood in Istanbul, Turkey, May 1, 2015.  (Picture: REUTERS/Kemal Aslan)

Opposition parties and unions called on the government to lift the ban.

Erdogan has previously dismissed protesters as "riff-raff" and terrorists, outraged by the unrest in 2013 that brought unwanted international attention and posed the biggest challenge to his AK Party since it came to power in 2002.

He is aiming for a massive victory for the party in June parliamentary polls, which would allow it to change the constitution and give him broad presidential powers.

The 2013 Taksim protests began as a peaceful demonstration against plans to redevelop Gezi Park, a leafy corner of the square. After a police crackdown the demonstration spiralled into weeks of nationwide protests against Erdogan&39;s rule.

An elderly man lies on the ground near riot police during violent May Day protests in Istanbul http://t.co/fxOWTpDHlP pic.twitter.com/4usEhHNLHF

Happy May Day. Turkey cracks down on Istanbul protesters pic.twitter.com/re7l5niTa6