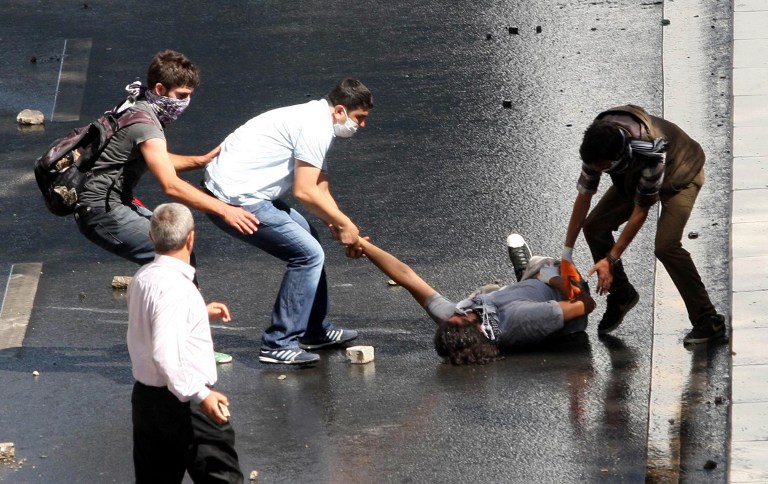 An injured demonstrator is helped during clashes between riot police and demonstrators in Ankara on June 1, 2013.On Saturday, police in Ankara blocked a group of demonstrators from marching on parliament and the prime minister's office.

ISTANBUL - After two days of violent protests and appeals by Turkey&39;s Western allies for restraint, the situation appeared to have calmed on Sunday after police pulled out of Taksim and officials took on a more conciliatory tone.

Officials said 53 civilians and 26 police officers were hurt during the violence, while Amnesty International put the number of wounded in the hundreds and said there had been two deaths.

Amnesty said some protesters had been left blinded by the massive quantities of tear gas and pepper spray used by police while at least two people were hit in the head with gas canisters.

Interior Minister Muammer Guler said police had detained 939 people as of Saturday evening, but many have been released.

Hundreds of people were occupying Istanbul&39;s Taksim Square on Sunday, the epicentre of the worst demonstrations in a decade against Turkey&39;s Islamist-rooted government which have seen almost 1,000 people detained and scores wounded nationwide.

Some protesters camped around the square&39;s monument to Mustafa Kemal Ataturk, the founder of modern secular Turkey, occasionally chanting "Government, Resign!" and victory cheers after the police withdrew on Saturday.

Taksim has been at the heart of a wave of more than 90 demonstrations in 48 cities nationwide, the biggest public outcry against Prime Minister Recep Tayyip Erdogan&39;s government since it assumed power in 2002.

Turkey&39;s Western allies Britain, France and the United States have called for the Erdogan government to exercise restraint, while Turkish officials acknowledged mistakes.

"We have learnt our lesson," Istanbul mayor Kadir Topbas told NTV on Saturday.

He said he regretted "not informing the people enough" on the details of the construction project in Taksim, the spark that led to the protests.

What began as an outcry against a local development project in Turkey&39;s largest city snowballed into a broader protest against what critics say is the government&39;s increasingly conservative and authoritarian agenda.

Speaking at a rally on Saturday, Erdogan acknowledged:  "It is true that there have been some mistakes, extremism in the police response."

But he added: "I call on the protesters to stop their demonstrations immediately."

He also vowed to push forward with controversial plans to redevelop the square, but said the project may not include a shopping mall, as feared by protesters.

The interior ministry promised legal action against police officers who had acted "disproportionately".

President Abdullah Gul had called on Saturday for restraint on both sides.

Mass circulation newspaper Milliyet plastered "Freedom Park" on the front page, with a picture showing the thousands who had flocked to the square on Saturday.

"Put that AVM (shopping mall) down and start running away fast," was the headline of liberal Birgun newspaper on Sunday.

Officials said a dozen people were being treated in hospitals, and one of them was in intensive care after brain surgery.

Amnesty said in a statement that it had opened its Istanbul offices near Taksim Square to give sanctuary to protesters and that doctors were treating the injured there.

"But the excessively heavy-handed response to the entirely peaceful protests in Taksim has been truly disgraceful," he added.

Human Rights Watch also suggested the number of injured was higher than official figures and said one protester had lost an eye after police shot him with a plastic bullet.

The US State Department called on NATO-member Turkey to uphold "fundamental freedoms of expression, assembly and association, which is what it seems these individuals were doing".

"We urge authorities in Turkey to exercise restraint and not to use tear gas indiscriminately," the British Foreign Office tweeted on Saturday.

But he rejected comparisons with Arab Spring uprisings, saying "we are dealing (in Turkey) with a government that was democratically elected."

Some 1,800 people rallied in Vienna on Saturday to denounce the Erdogan government and show their support for protesters in Istanbul, Tur.

The protests also follow a recent law introduced by Erdogan&39;s  ruling Justice and Development Party (AKP) that will restrict the sale and advertising of alcohol.

Erdogan&39;s populist government is often accused of trying to make the predominantly Muslim but staunchly secular country more conservative and has also been criticised for its crackdown on opponents including Kurds, journalists and the military.