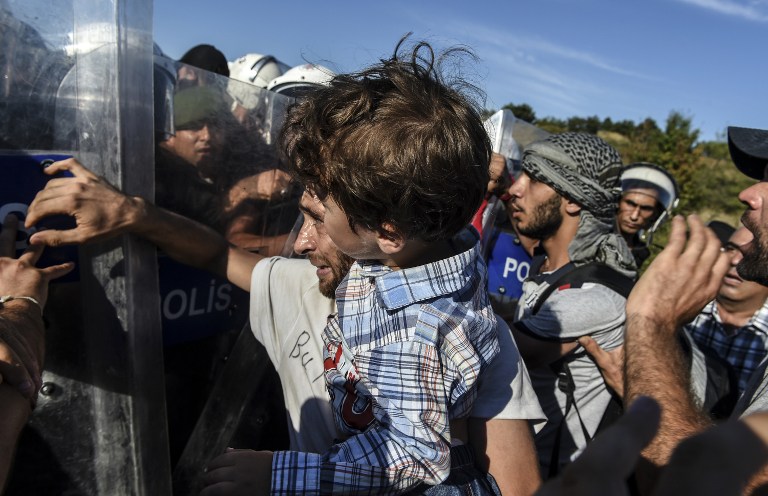 Syrian refugees clash with Turkish riot police as they blocked a route, preventing migrants and refugees from continuing on their way to the Turkish-Greek border at Edirne on September 19, 2015.

TURKEY - Tensions rose on Saturday in the northwestern Turkish city of Edirne, where around 2,000 migrants have been blocked by police from reaching the nearby border with Greece for nearly a week.

The migrants have been facing off with police since Tuesday, when local authorities sealed off the main road from the east to groups of mostly Syrian refugees arriving from other parts of Turkey.

The standoff has been devoid of the violence that has characterised confrontations between migrants and police in some parts of Europe.

Tensions edged higher on Saturday afternoon, with riot police using batons to disperse a group of around 300 people who tried to force their way past police lines.

Turkey: A boy cries as Syrian refugees push against a police barricade near the Greek border in Edirne. @Kilicbil pic.twitter.com/baqecbksRr

The demonstrating migrants were from a group that has been refusing to budge from the road outside Edirne.

Around 1,000 migrants, many of them children, spent another night in makeshift camps by the roadside, around 10 kilometres (six miles) from the Greek border and 20 km from the border with Bulgaria.

Hundreds more accepted the city&39;s offer of a tent, showers and hot meal in a stadium used for traditional Turkish oil wrestling competitions.

The migrants are demanding to be allowed to cross into Greece by land instead of risking their lives in overcrowded migrant boats in the Aegean Sea.

"Open the doors," the group of migrants that tried to storm police barricades chanted.

One refugee hurled excrement at the officers, an AFP photographer witnessed.

Edirne, a city of around 170,000, has become a new rallying point for migrants trying to reach Europe.

Encouraged by the Crossingnomore social media campaign, which calls for migrants to be allowed to travel safely overland, up to 1,000 refugees flocked to Edirne earlier this week.

Many of the refugees have been living in Turkey for months, sometimes years, after fleeing the bloody civil war in Syria across the two countries&39; 900-kilometre border.

Turkey has taken in an estimated 2.2 million Syrians, around 260,000 of whom live in refugee camps, according to official figures.

Authorities in Edirne have threatened to return the refugees amassed in the city to the camps.

Turkey: Alameddin, a 13-year-old Syrian boy plays the violin in front of a police barricade near Edirne. @Kilicbil pic.twitter.com/wZmUY3pzlQ