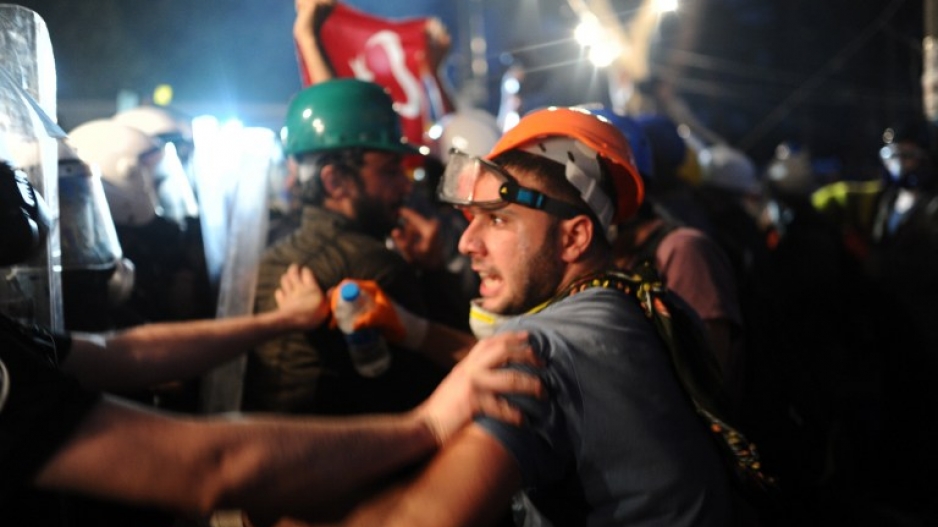 Protesters confront with the Turkish riot police before they move in Gezi Park in Istanbul on June 15, 2013.

ISTANBUL - Police sealed off the flashpoint Istanbul park on Sunday after firing tear gas and water cannon to dislodge thousands of protesters.

Riot police were still clashing with pockets of protesters in streets near Gezi Park as tens of thousands of supporters of Prime Minister Recep Tayyip Erdogan began gathering for a rally 10 kilometres away.

The operation to clear Gezi Park late on Saturday came just two hours after Erdogan issued an ultimatum to demonstrators to end their occupation of the site, the symbolic heart of nationwide protests against the government.

Thousands of campers scrambled to escape the clouds of acrid smoke, as officers with gas masks and riot shields stormed the patch of green, clearing it within minutes and leaving a trail of empty tents in their wake.

Many demonstrators sought refuge in the luxury hotels bordering the park, prompting police to douse the lobby of at least one five-star establishment with water as guests choked on tear gas fumes.

In a fresh clash on Sunday, police used tear gas and water cannons to disperse hundreds of people who gathered in Ankara&39;s central Kizilay to lay flowers at the spot where a protester was fatally wounded on June 1.

"We have an Istanbul rally tomorrow (Sunday)," Erdogan told tens of thousands of cheering loyalists at an election rally for his ruling Justice and Development Party (AKP) shortly before the police operation.

"If (the area) is not evacuated, this country&39;s security forces know how to evacuate there," he said in the capital Ankara.

"Nobody can intimidate us," said Erdogan, 59. "We don&39;t take orders or instructions from anybody except from God."

Turkish Prime Minister Recep Tayyip Erdogan addresses to his supporters during the "Respect to National Will" rally in Ankara. The sub-theme of the rally is "Let&39;s Spoil the Big Game and Write History!"

As the clashes raged in Istanbul, thousands of anti-government demonstrators took to the streets of Ankara and the western city of Izmir in solidarity.

The unrest that has rocked Turkey since late last month sprang from a peaceful sit-in in Gezi Park against a redevelopment plan that would destroy the green space.

After the protest was met with a brutal police response, it spiralled into angry demonstrations against Erdogan across the country.

Critics accuse Erdogan and his Islamic-rooted party of becoming increasingly authoritarian and of imposing Islamic conservative values on the mainly Muslim but staunchly secular nation of 76 million.

The crisis has claimed four lives and injured nearly 7,500 people so far, according to the Turkish Medical Association, and represents the biggest challenge yet to Erdogan&39;s decade-long rule.

Mey Elbi, a 39-year-old yoga teacher, was in Gezi park when police entered and said they seized the protesters&39; goggles and gas masks.

"I won&39;t give up," she told journalists. "We&39;re angry, this is not over. The world has seen that together, we can stand up to Tayyip."

The Taksim Solidarity group, seen as most representative of the protesters, condemned Saturday&39;s "brutal attack".

"The police raid left hundreds of protesters injured and there are dozens more who were hit by rubber bullets," it said in a statement.

On Sunday, police strictly controlled access to Gezi Park and the adjoining Taksim Square, another focal point for protests.

"The government could not have let this occupation go on forever," AKP deputy leader Huseyin Celik said in televised remarks overnight. "This nightmare needs to end."

The protesters said the government had failed to address all their demands, which include a call for arrested demonstrators to be released and for police chiefs in cities that saw clashes to be sacked.

The United States and other Western allies, along with human rights groups, have widely criticised Erdogan&39;s handling of the crisis.

Erdogan has been in power since 2002, boasting three consecutive election victories largely thanks to Turkey&39;s strong economic performance.