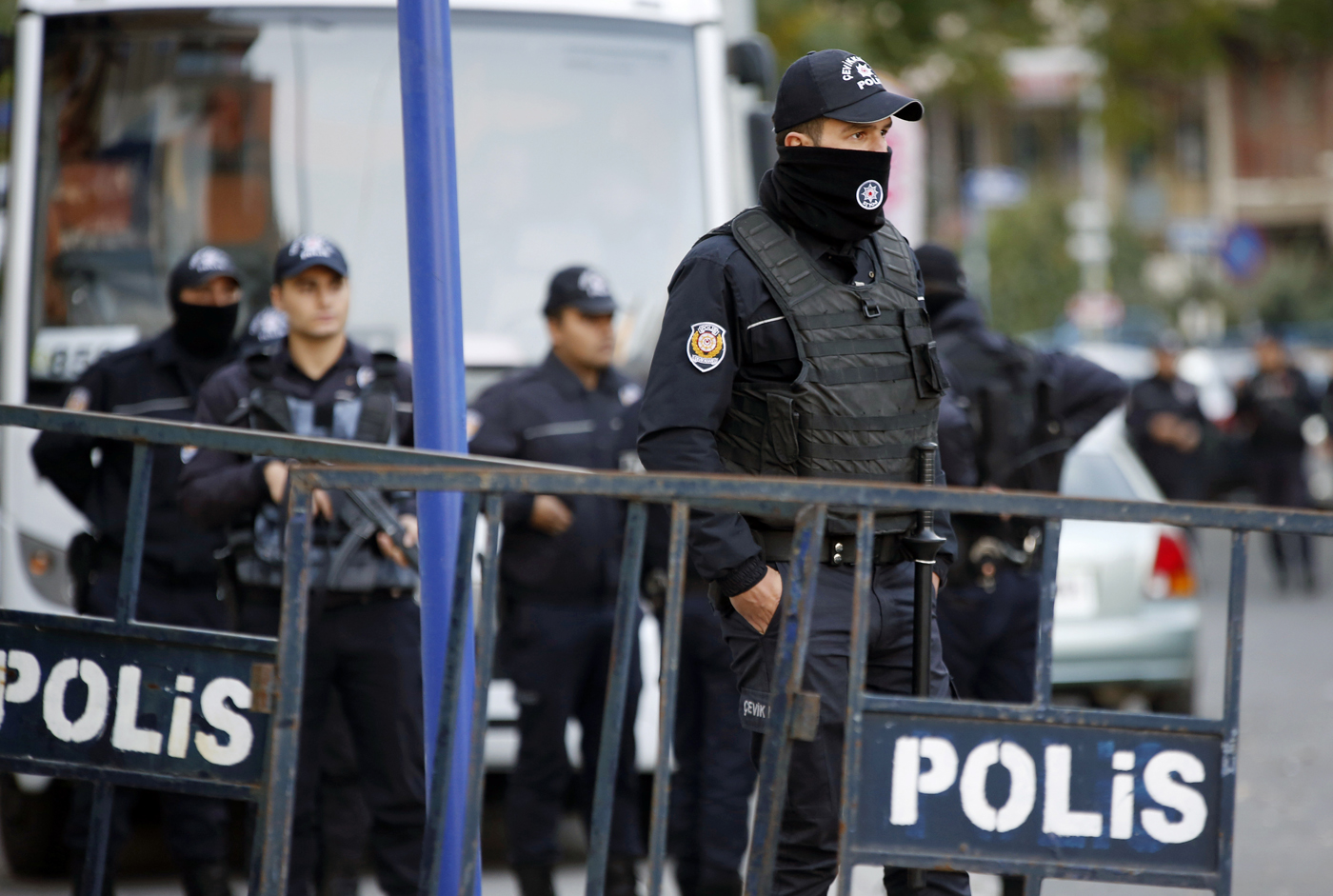 Police secure the area in front of the headquarters of the Turkish Peoples' Democratic Party during an operation in Ankara on November 4, 2016.

ISTANBUL – An Istanbul court on Saturday remanded in custody ahead of trial nine staff from the opposition Cumhuriyet newspaper, in an intensifying crackdown a day after the leaders of the country's main pro-Kurdish party were also jailed.

There had been growing international alarm over the use of a state of emergency implemented in the wake of the failed July 15 coup against critics of President Recep Tayyip Erdogan.

Nine MPs from the opposition pro-Kurdish People's Democratic Party (HDP), including its co-leaders Selahattin Demirtas and Figen Yuksekdag, were jailed ahead of trial by the courts on Friday on terror charges.

The nine Cumhuriyet staff placed under arrest after their detention earlier this week include some of the most prominent names in Turkish journalism, the state-run Anadolu and private Dogan news agencies said.

The suspects are charged with links to the Kurdish militant Kurdistan Workers Party (PKK) and the movement of US-based preacher Fethullah Gulen blamed for the failed coup bid. Gulen denies the accusations.

Like the nine HDP MPs, they will now be held behind bars ahead of a trial, a date for which had yet to be set.

At total of 13 staff from Cumhuriyet had been detained in raids on Monday in a swoop that amplified concerns about press freedoms in Turkey.

While the nine were remanded in custody, columnists Hikmet Cetinkaya and Aydin Engin were released on judicial control due to age and health grounds, the reports said.

Demirtas and Yuksekdag meanwhile spent their first night behind bars after their arrest on Friday.

While their hearings took place in the south-eastern city of Diyarbakir, both were flown to prisons in the west of Turkey well away from their strongholds in the east.

Demirtas is now in prison in Edirne province close to the Greek and Bulgarian borders while Yuksekdag was taken to Kocaeli just east of Istanbul, reports said.

Dogan news agency showed dramatic footage of Demirtas arriving in Edirne province on a helicopter which landed in the middle of an athletics field before he was taken to prison in a multi-vehicle convoy.

Their arrest along with those of the seven other HDP MPs, on various charges of membership of the PKK and making "terror propaganda" for the group, sparked immediate alarm among Turkey's Western allies.

READ: US 'deeply troubled' over Turkey detention of Kurdish leaders

EU foreign policy chief Federica Mogherini said she was "extremely worried" over the detentions and would call a meeting of EU ambassadors in Ankara.

US State Department spokesman John Kirby said Washington was "deeply concerned", saying there was a "worrisome trend" of limiting freedom of expression in Turkey.

IS said to claim attack

The jailing of the HDP MPs took place hours after a bomb attack in Diyarbakir outside a police headquarters killed nine people and wounded over 100.

The government immediately blamed the PKK for the attack. But the Amaq news agency, which is linked to the Islamic State, said that its fighters were behind the bombing, the SITE Intelligence Group said. There has so far been no comment from the PKK.

With tensions escalating, the Turkish authorities sparked further controversy by slapping restrictions on social media and messaging services like WhatsApp on Friday.