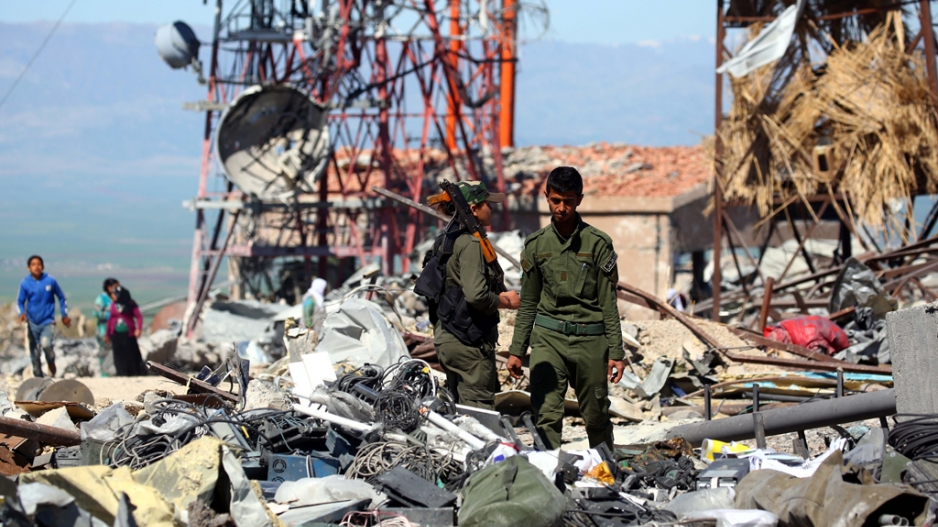 Fighters from the Kurdish People's Protection Units (YPG) and Kurdish police, known as the Asayish, visit the site of Turkish airstrikes near northeastern Syrian Kurdish town of Derik, known as al-Malikiyah in Arabic, on April 25, 2017.

AL-MALIKIYAH, Syria - Turkish warplanes killed more than two dozen Kurdish fighters Tuesday in strikes in Syria and Iraq, where the Kurds are key players in the battle against the Islamic State group.

Turkey said it had carried out the strikes in northeast Syria and northern Iraq against "terrorist havens", vowing to continue acting against groups it links to the outlawed Kurdistan Workers&39; Party (PKK).

READ: Spate of attacks in Turkey blamed on PKK

In northeast Syria, strikes targeting the Kurdish People&39;s Protection Units (YPG) -- who are leading the offensive against IS stronghold Raqa -- were reported to have killed 20 fighters.

In northern Iraq they killed six peshmerga fighters from the autonomous Kurdish government, usually allied with Ankara, in an apparent accident.

Baghdad condemned a "violation of international law and Iraqi sovereignty".

The strikes underlined the complexities of the battlefields in Iraq and Syria, where twin US-backed offensives are seeking to dislodge IS from its last major urban strongholds.

They could also exacerbate tensions between Ankara and its NATO ally Washington, which leads an anti-IS coalition carrying out air strikes in Syria and Iraq and sees the Kurds as instrumental in the fight against IS.

Turkey said its strikes aimed "to destroy terrorist havens targeting our country" and vowed to press the offensive "until the very last terrorist is neutralised".

It said 40 PKK fighters were "neutralised" in Iraq and around 30 in Syria.

"The solution to the problem of the presence on Iraqi territory of PKK members must be coordinated with the Iraqi government," spokesman Hadithi said.

The bombardment near the Syrian city of Al-Malikiyah saw "dozens of simultaneous air strikes" overnight on YPG positions including a media centre, a monitoring group said.

READ: US must choose between Turkey, Syrian Kurds: Erdogan

An AFP journalist saw collapsed buildings and rescuers searching through the rubble.

Representatives of the US-led coalition visited the site of the air strikes, the YPG&39;s political arm, the Democratic Union Party (PYD), said on Twitter.

An officer wearing a patch bearing a US flag was seen at the site with YPG fighters.

Ankara has bombed the YPG in northern Syria for months, calling it a "terrorist" group because of its ties to the PKK, which has been waging a deadly insurgency against Turkey since 1984.

While the air raids on Syria appeared to hit their intended targets, the bombardment in Iraq instead killed members of Kurdish security forces typically allied with Ankara.

The peshmerga ministry in Iraq&39;s autonomous Kurdish government said the raids killed five of its fighters and one intelligence officer.

Turkey appeared to have been targeting a minority Yazidi militia allied with the PKK and based in the northwestern region of Sinjar.

The peshmerga denounced the strike as "unacceptable" but focused blame on PKK-affiliated groups.

"These problems and tensions are all because of the PKK&39;s presence," it said, accusing the PKK and its affiliates of refusing to withdraw from the Sinjar area.

The peshmerga have been instrumental in the battle against IS in northern Iraq though have stepped back in recent weeks as Iraqi forces advance against IS in Mosul.

Iraqi forces on Tuesday said they had retaken full control of Tenek, one of west Mosul&39;s largest neighbourhoods.

Eastern Mosul was recaptured in January and a push on the western half launched the following month has made steady progress despite fierce resistance.

IS is facing multiple offensives across Syria and Iraq -- often led by governments or forces that otherwise bitterly oppose each other.

Turkey launched an unprecedented cross-border operation into Syria in August to fight IS and to keep the YPG in check.

The YPG makes up the bulk of the Syrian Democratic Forces alliance of Kurdish and Arab fighters taking on IS in Syria.

After chipping away at IS territory across the north, the SDF is now locked fighting the jihadists inside Tabqa, a key town on the Euphrates River.

The SDF entered the town on Monday as part of its offensive on Raqa, Syrian heart of the jihadists&39; self-styled "caliphate" since 2014.