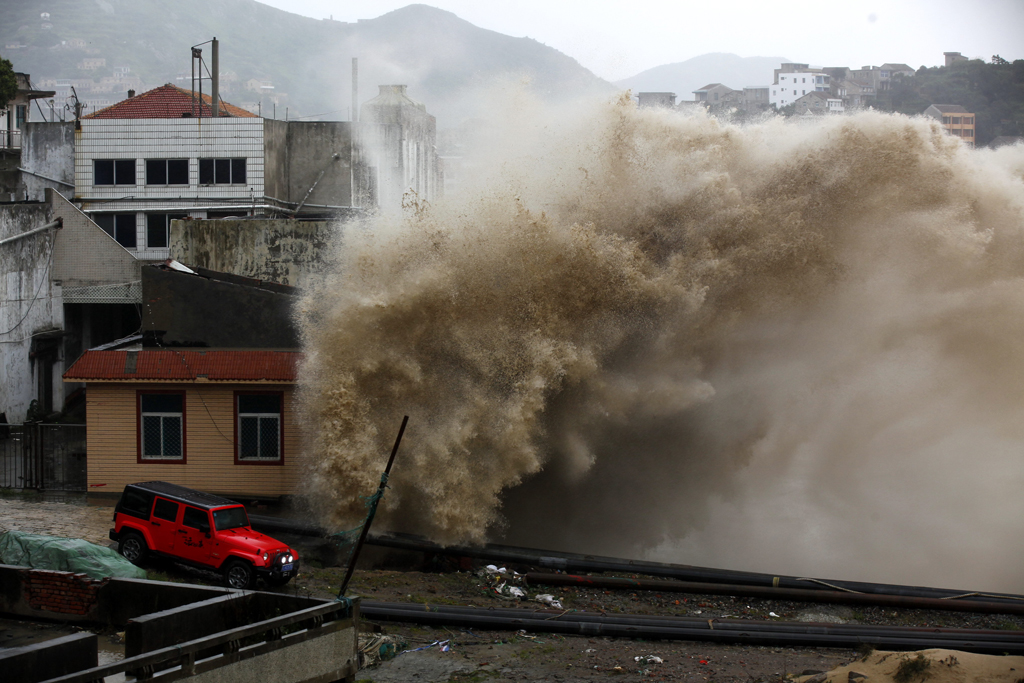 A photgraph made available on 11 Juy 2015 showing sea tides strengthened by Typhoon Chan-Hom hit the sea shore as a vehicle passes by in Wenling in east China's Zhejiang province 10 July 2015.

A strong wind and rainstorm alert has been issued along South Korea&39;s southern and western coastal areas, which received up to 291 millimetres (11.4 inches) of rain.

Authorities in China evacuated more than a million people as the typhoon swiped the eastern coast on Saturday, paralysing transport links and devastating farmland, although no casualties were reported, the Chinese government and state media said.

Huge waves struck the coast in Wenling, in the east of worst-hit province Zhejiang, while further north people in the city of Shaoxing scrambled onto diggers and dragged themselves along ropes to escape the floodwaters.

In the wake of the storm, photos circulating on the Internet showed residents young and old catching fish that the typhoon had washed ashore.

China&39;s National Meteorological Center Sunday downgraded its alert on the typhoon from red to orange, its second-highest warning.

But it issued a rainstorm alert for the provinces of Shandong, Liaoning, Jilin and Heilongjiang and forecast strong gales in the north of the East China Sea.

Five people in the Philippines were killed earlier in the week and more than 20 people injured in Japan on Friday.

Taiwan was also affected by the storm, closing its stock market and shutting schools and offices Friday as heavy rainfall and fierce winds battered the north.

A number of flights in and out of Japan&39;s Okinawa island chain and northern Taiwan were cancelled.

Weather authorities said the typhoon would be downgraded to a tropical storm when it reaches North Korea&39;s Hwanghae province on Monday morning.