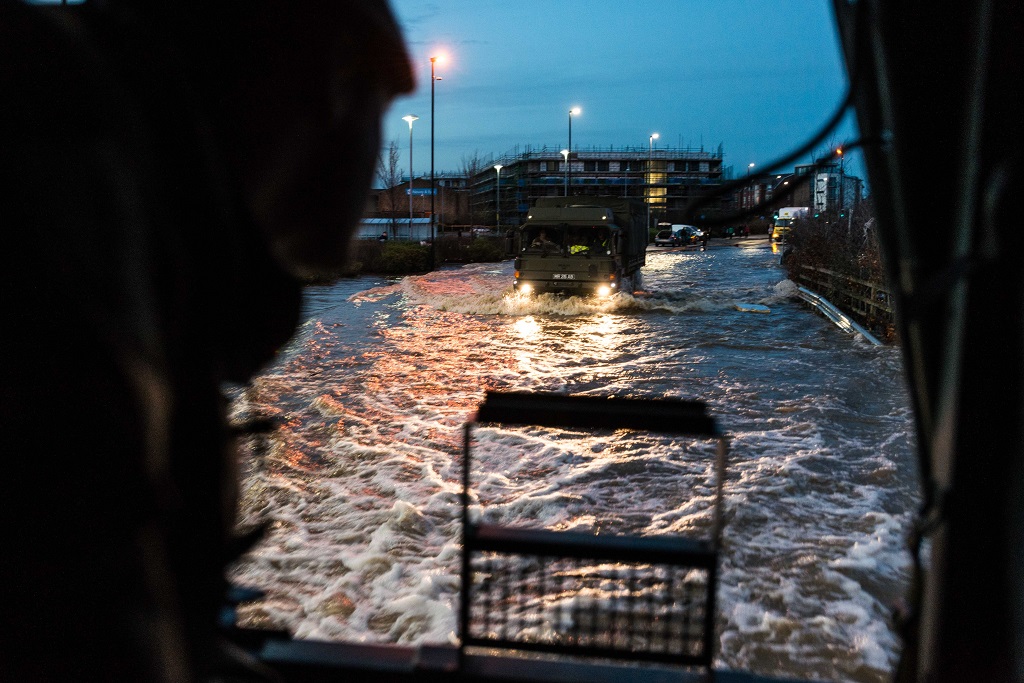 British military vehicles drive through floodwaters in York, Britain, 27 December 2015. West Yorkshire police said it was the 'worst flooding in 70 years' in the area.

More flooding is expected on Monday.

Cameron said the flooding is “unprecedented” and vowed to do everything possible to protect people and their property as the damage spread to the major cities York, Leeds and Manchester. He said protective systems and contingency plans will be reviewed because the frequency of such extreme weather events seems to be on the rise.

Weeks of persistent rainfall has saturated the ground and swollen the rivers to record levels, leaving entire swathes of northern England, and smaller parts of Wales and Scotland, vulnerable. Several hundred flood warnings remain in effect.

This was the moment rescuers plucked a man out from the roof of his Land Rover as flood waters overcame the roads https://t.co/yng5itpmHB

There have been no fatalities or serious injuries reported, but hundreds of people have been evacuated from houses and apartments in York, 320km north of London, where 3,500 properties are judged to be at risk.

“In Lancashire every single river was at a record-high,” she said. “In Yorkshire we have seen some rivers a metre higher than they have ever been before. Clearly, in the light of that, we will be reviewing our flood defences.”

Several hundred people had been evacuated the day before in the West Yorkshire and Lancashire regions and officials said thousands had lost power. The number of people affected continues to grow as flooding spreads and has an impact on cities, villages and towns.

A picturesque 200-year-old pub, The Waterside, in the greater Manchester area, collapsed and part of the structure was swept away by the River Irwell.

Dramatic Footage Shows 200-Year-Old Pub Washed Away In Floods: The Waterside pub in Summerseat fell victim to the… https://t.co/fJbMnbr3LE

Rising river levels also threatened downtown Manchester and police dealt with a ruptured gas main and small fire believed to have been caused by the flooding.

The Environment Agency urged residents to remain vigilant because more “severe” flooding is expected on Monday.

The agency used its Twitter feed to beg people to be cautious, tweeting that driving or walking in flowing flood waters could be life-threatening.

Remember to stay away from flood water. Six inches of fast flowing water can knock you off your feet. floodaware pic.twitter.com/3gFb0Mptjz