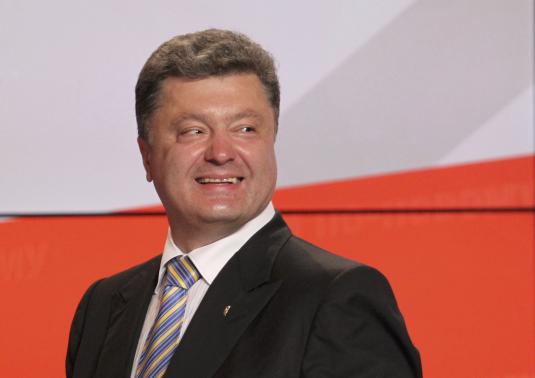 Ukrainian businessman, politician and presidential candidate Petro Poroshenko smiles as he speaks to supporters at his election headquarters in Kiev.

KIEV - Chocolate baron Petro Poroshenko claimed a resounding victory on Sunday in Ukraine&39;s presidential election and immediately vowed to end a bloody pro-Russian uprising that thwarted voting across swathes of the separatist east.

The pro-Western self-made billionaire won close to 56 percent of a vote held while the ex-Soviet country is threatened by disintegration and financial collapse.

"My first decisive step will be aimed at ending the war, ending chaos, and bringing peace to a united and free Ukraine," the 48-year-old said after polls closed in a vote billed as the most important since Ukraine&39;s independence in 1991.

"I am certain that our decisive actions will bring fairly quick results," he said in reference to an outcome that analysts said hands him a strong mandate to deal directly with Russian President Vladimir Putin.

The armed rebellion meant voting was largely blocked in two eastern regions that make up 15 percent of the national electorate -- raising concerns about the legitimacy of his mandate across the entire country and in Moscow.

Official confirmation of the results Monday should avoid the need for a June 15 runoff that would have extended political uncertainty and put more pressure on East-West relations that are already at a post-Cold War low.

The exit polls put the political veteran more than 30 points ahead of nearest rival Yulia Tymoshenko. The divisive former prime minister and 2004 Orange Revolution co-leader may be looking at the sunset of a dramatic decade-long career that now sees her name smeared by ugly corruption scandals.

US President Barack Obama praised Ukrainians for showing courage by voting in the face of the threat posed by militants who have seized about a dozen cities and towns in a seven-week rebellion.

"Despite provocations and violence, millions of Ukrainians went to the polls throughout the country, and even in parts of eastern Ukraine, where Russian-backed separatist groups sought to disenfranchise entire regions, some courageous Ukrainians still were able to cast their ballots," the White House quoted Obama as saying.

But Putin issued no immediate comment and instead spent Sunday evening in Belarus watching his country compete in the final of the ice hockey world championship.

He had rejected the authority of Kiev&39;s Western-backed interim leaders and had only promised to "respect" the outcome of Sunday&39;s vote.

Poroshenko vowed to pay his first trip to the east where insurgents have proclaimed their own independent republics in a rebellion that has already cost scores of lives.

Ukrainians voted en masse in the capital Kiev and the west but were kept from doing so by armed militants who blocked polling stations across most of the east.

"We consider Poroshenko -- if he is elected -- to not be legitimate," said former pro-Russian presidential candidate Oleh Tsarov.

"We consider that the winner of the election is president of west Ukraine -- he is a half president."

The election commission said voting had been suspended by militants in 24 of Ukraine&39;s 213 constituencies.

The ballot was called after Kremlin-allied president Viktor Yanukovych -- his corruption-stained regime long a source of discontent -- was ousted in February in the bloody climax of months of protests sparked by his rejection of a historic EU pact.

Poroshenko said Ukraine had a "long list of problems" to discuss with Russia through negotiations that should also involve Washington and the European Union.

He also promised to hire a consultant who could help him sell his vast business assets to avoid any possible conflict of interest or corruption allegations.

The ex-Soviet nation on the EU&39;s eastern frontier is fighting for its very survival after Putin responded to the popular overthrow of a Kremlin-backed leader by seizing Crimea and threatening to invade the rest of Ukraine to "protect" the country&39;s ethnic Russian community.

The new leader will also have to set into motion overdue economic restructuring measures that world lenders are demanding in return for $27-billion in aid to stave off bankruptcy.