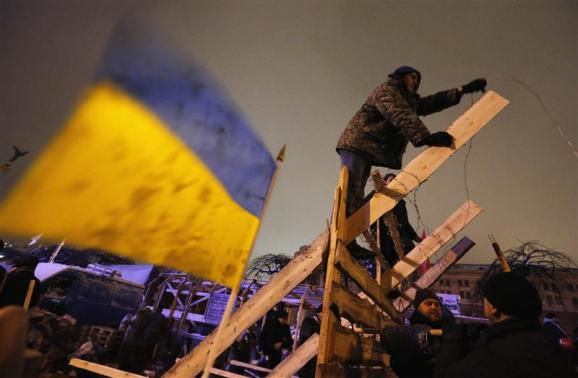 KIEV - Ukrainian protesters stood their ground on Wednesday after an overnight sweep by riot police and their leaders dismissed an offer of talks from a president they say must quit for favouring ties with Russia over the European Union.

Pressed by Europe and the United States, which condemned the destruction of a protest camp in central Kiev, President Viktor Yanukovich offered to meet opposition leaders to find a way out of a crisis that blew up last month when he yielded to pressure from Moscow and spurned a free trade deal with the EU.

But his opponents, whose supporters continued to occupy the capital&39;s City Hall, rejected his invitation and stuck to demands that the president and his government resign.

The authorities had made their most forceful attempt so far to reclaim the streets, sending in battalions of riot police with bulldozers to clear Independence Square.

There were scuffles and arrests but police did not enter the nearby City Hall and by morning they withdrew from the streets.

Within hours, after meetings with US and European Union officials who had urged him to compromise, Yanukovich asked his opponents to meet him to negotiate a way out of the impasse:

"I invite representatives of all political parties, priests, representatives of civil society to national talks," he said in a statement that also called on the opposition not to "go down the road of confrontation and ultimatums".

One protest leader, Oleh Tyahnibok, dismissed the move as "a farce and a comedy", while Arseny Yatsenyuk, a leader of a major opposition party, said there should only be talks once their demands had been met.

These include the resignation of the president and government and a release of prisoners.

In some of the strongest comments from Washington so far, the White House spokesman urged Yanukovich to listen to the people and resume Ukraine&39;s integration with Europe: "Violence of this sort that we have seen on the streets of Kiev is impermissible in a democratic state," he added.

Secretary of State John Kerry spoke of "disgust" at the use of force and a spokeswoman for his department said Washington was considering sanctions against Ukraine, among other options -- a move that could further sour relations with Russia, which says the West is trying to browbeat Kiev to weaken Moscow.

At stake is the future of a country of 46 million people, torn between popular hopes of joining the European mainstream and the demands of former Soviet master Russia, which controls the flow of cheap natural gas needed to stave off bankruptcy.

At the main protest camp on Independence Square, pop stars, politicians and priests had pleaded with police not to shed blood. The interior minister called for calm and promised that the square would not be stormed.

But even after the police left the streets, Vitaly Klitschko, a world boxing champion who has emerged as one of the main figures of the opposition, said the overnight action had "closed off the path to compromise".

"We understand that Yanukovich has not wish to talk to the people and only understands physical force," he said.

The interior ministry appealed for restraint, however, and the police action stalled after day broke, with temperatures in the snowbound city stuck well below freezing. Some riot police left to cheers from lines of protesters.

At City Hall, demonstrators had sprayed police with water from a hose and had lobbed a Molotov cocktail from a window into a police truck before the officers finally withdrew.

On the square, protesters, many wearing hardhats in orange, the colour that symbolised a successful popular revolt against a fraudulent election in 2004, had listened to prayers and a plea from national pop icon Ruslana: "Do not hurt us!"

Some protesters held mobile phones in the air like candles and sang the national anthem, while church bells rang out from a cathedral a mile away, as in times of danger centuries ago.

"He is spitting in the faces of the United States, 28 countries of Europe, 46 million Ukrainians," opposition leader Yatsenyuk said of Yanukovich during the night. "We will not forgive him this."

The eventual police withdrawal was greeted with euphoria.

"We are seeing that truth does exist, that it is worth fighting for. It is a small victory, but these small victories will lead to big victories," said protester Serhiy Chorny.

The crisis has added to the financial hardship of a country on the brink of bankruptcy. The cost of insuring Ukraine&39;s debt against default initially rose 30 basis points, before falling back after the police withdrew from the streets.

It now costs over $1 million a year to insure $10 million in state debt over five years -- showing investors think it is more likely than not Ukraine will default in that time.

Prime Minister Mykola Azarov said on Wednesday he had told European leaders they would need to provide Kiev with 20 billion euros in aid for Ukraine to sign the stalled pact with Brussels.

He promised that a meeting with Russian officials set for December 17 would not include talks on joining a Moscow-dominated customs union, a major worry for the opposition.

EU foreign policy chief Catherine Ashton and U.S. Assistant Secretary of State Victoria Nuland were both in Kiev, as part of a diplomatic campaign to lure Ukraine back westwards.

Nuland visited protesters before meeting Yanukovich on Wednesday. After two hours of talks with the president, she said she had complained to him about police behaviour.

"But we also made clear that we believe there is a way out for Ukraine, that it is still possible to save Ukraine&39;s European future and that is what we want to see the president lead," she said.

This would require reopening talks with Europe and with the International Monetary Fund, which has offered Ukraine loans on conditions which Yanukovich has rejected.

European Union officials are discussing with the IMF, World Bank and other financial institutions how to help Ukraine if it decides after all to sign an EU deal.

After meeting Yanukovich, Ashton, too, condemned the use of force against demonstrators as "totally unacceptable". She said those arrested must be released and all-party talks begun.

The police action re-energised a protest movement that activists had feared could lose momentum in the bitter cold.

Thousands of people streamed to the square in the dead of night, woken by telephone calls and social media messages from those standing their ground.

After the police left, volunteers rebuilt barricades and poured water on the cobblestones to turn them into ice sheets in anticipation of another assault.

They packed ice-hard snow over metal scraps, logs and benches while a priest on stage called out: "They broke down our barricades, but they can&39;t break our hearts!"