Ukraine voters out in force but poll blocked in rebel east 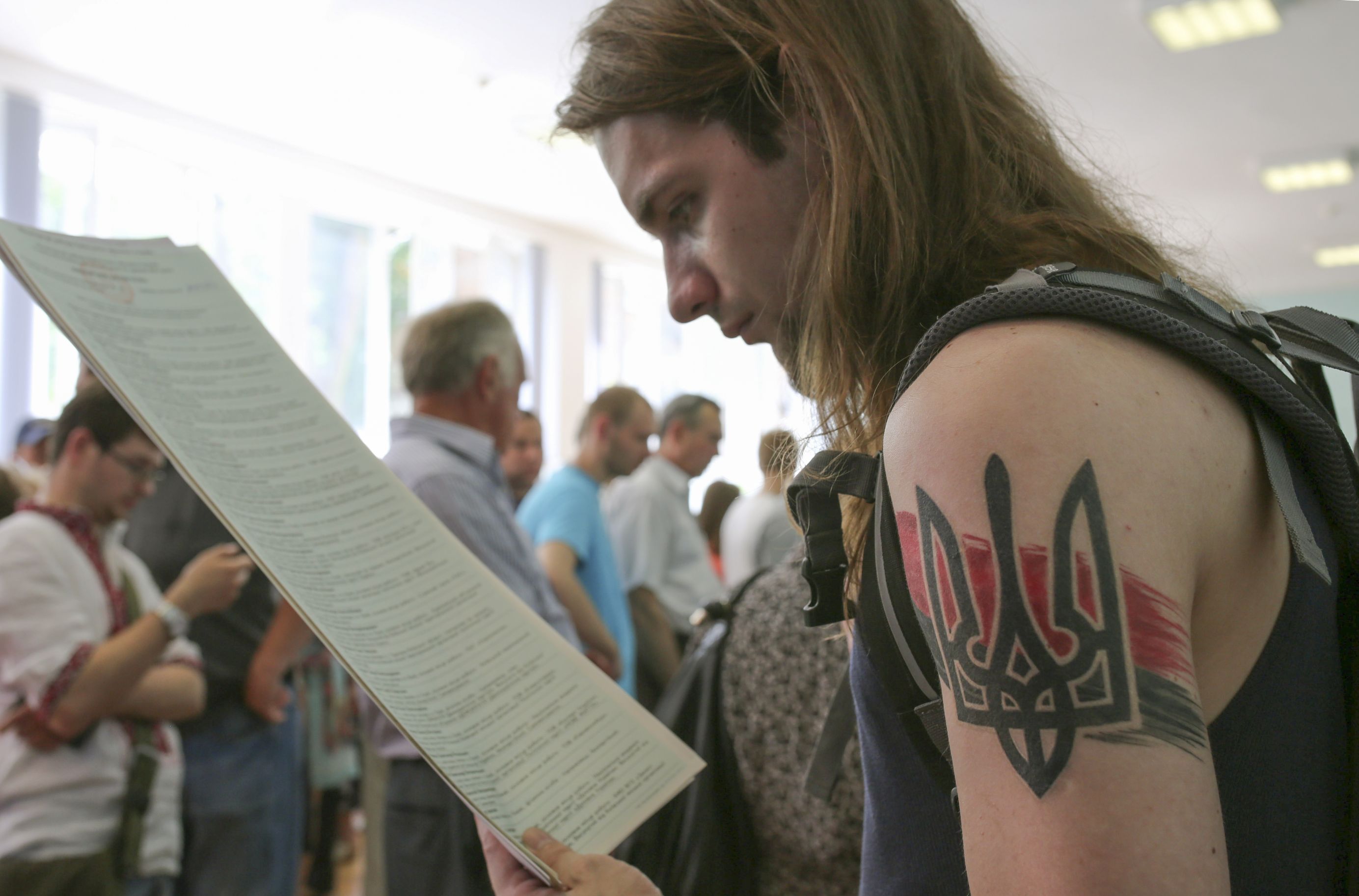 An Ukrainian man, tattooed with a red and black Ukrainian emblem, examines his ballot during voting in Kiev, Ukraine, 25 May 2014.

KIEV - Ukrainians turned out en masse Sunday in an election seen as crucial to ending months of bloody upheaval but pro-Russian rebels managed to shut down polling in swathes of the east.

The former Soviet republic is fighting for its very survival after Russia seized Crimea and separatists launched an armed uprising in the eastern industrial belt, the worst crisis since independence over two decades ago.

"The first thing we must do is bring peace to all the citizens of Ukraine," said billionaire tycoon Petro Poroshenko, the clear favourite in a packed field of candidates to lead the former Soviet republic.

"Armed people must leave the streets of towns and cities," he said after casting his ballot in Kiev.

Turnout across the country was reported at over 38 percent after seven hours of voting.

The West is closely watching the vote -- and Russia&39;s actions -- fearing civil war could break out on Europe&39;s doorstep.

Poroshenko called for "direct dialogue" with the people in Donetsk and Lugansk, where insurgents declared independence two weeks ago after referendums branded as shams by Kiev.

The ballot was called after Kremlin-allied president Viktor Yanukovych was ousted in February in the bloody climax of months of protests sparked by his rejection of a historic EU alliance.

But his fall set off a chain of tumultuous events which saw the Kremlin annex the Black Sea peninsula of Crimea and then pro-Russian rebels take up arms in the eastern hub of Ukraine&39;s coal and steel industries.

In the separatist areas, voting was patchy with only 11 of the 34 electoral constituencies open, according to the central election commission.

"Ukraine is now another country so I don&39;t see why we should take part in this election," said one woman in Donetsk called Elisabeta.

Election officials had reported numerous cases of intimidation and attacks and rebels threatened Saturday they would disrupt the vote "by force if necessary".

In the centre of Donetsk, about 2,000 people demonstrated in support of the separatists, as armed men in camouflage gear and balaclavas stood guard.

"You are heroes," the crowd shouted. "Do not take prisoners, kill them."

No fighting between rebels and Ukrainian forces was reported as voting was under way.

But violence flared Saturday in the flashpoint of Slavyansk, where one Italian photographer and his Russian translator were killed and a French photographer wounded after being caught in a gunbattle.

Russian President Vladimir Putin, facing the threat of further Western sanctions if Moscow interfered in the vote, appeared to make a major concession Friday by saying he was ready to work with the new Kiev team.

"We understand that the people of Ukraine want their country to emerge from this crisis. We will treat their choice with respect," he said.

Russia also said it started withdrawing from Ukraine&39;s border around 40,000 soldiers whose presence had raised deep suspicions about Moscow&39;s next move.

But in what Kiev branded a "provocation" Russian Prime Minister Dmitry Medvedev visited Crimea, which has been formally incorporated as part of Russia and where no voting was taking place.

In Ukraine, the authorities mobilised more than 82,000 police and 17,500 volunteers to ensure security for the vote, being overseen by 1,200 international monitors.

Turnout was particularly strong in Kiev.

The election should give the new president a stamp of legitimacy as he or she battles against the insurgency and tries to repair relations with Ukraine&39;s former masters in the Kremlin.

Opinion polls show Poroshenko winning 45 percent of the vote, just short of the 50-percent threshold needed to avoid a second round on June 15, and three weeks of further political uncertainty.

His main rival is former prime minister and heroine of the 2004 Orange Revolution Yulia Tymoshenko, who is trailing far behind on 7.5 percent.

At least 150 people have been killed in the east since the separatists took up arms against Kiev, while another 42 perished in fighting and a fire in Odessa, according to an AFP tally based on UN and Ukrainian government figures.

Another 100 people had lost their lives in the protest in Kiev, where charred buildings and barricades criss-crossing on Independence Square serve as poignant testimony to the dead.

Ukraine is hoping that up to $27 billion (20 billion euros) in global aid it won after the old regime&39;s fall may help avert threatened bankruptcy and revive growth in the recession hit country.

But the new leadership will also have to negotiate with Russia over vital supplies of gas, with Moscow threatening to halt shipments if Ukraine does not pay a bill by early June.

"I hope this election will launch a process of change for the better... but I don&39;t expect a magic wand," said Inna, a voter in the eastern city of Kharkiv that remains in Kiev&39;s control.

Ukrainians in Russia stay away from polls

Several hundred Ukrainians voted in the country&39;s presidential election in Moscow on Sunday but the vast majority of their countrymen in the Russian capital stayed away.

Viktor Girzhov, the head of the electoral commission at the Ukrainian embassy, said that 667 people had voted as of 4:00 pm Moscow time (1200 GMT).

That accounts for less than two percent of the Ukrainians registered as living in the Russian capital, Girzhov told a news conference.

"That doesn&39;t seem like many people, but you have to remember that as a rule few Ukrainians vote in Moscow. In the last legislative elections, there were less than 500 participants," Girzhov said.

A total of 26,997 Ukrainians are registered at the Ukrainian consulate, which is a only a small fraction of the estimated 1.6 million Ukrainians living in Russia.

At the doorway to the polling station, Maria was crying silently. A housewife, she had not registered to vote but had hoped to be able to cast her ballot anyway and had even dressed up for the occasion.

"My parents live in eastern Ukraine and they told me this morning that armed men took them to vote. They were counting on me to vote in the name of our family," she said, refusing to give her surname for fear of reprisals.

Another voter, 42-year-old Lila Sotnik, said her Russian friends had discouraged her from voting.

"They said that it was absolutely pointless," said Sotnik, holding her daughter by the hand.

"At school she is treated like she is a fascist. Our life has become a lot more difficult since the Ukraine crisis began," said Sotnik.

"I want a president who will allow the Russians to remember that we are brothers."

Six polling stations were opened in Russia for Ukrainians to vote in the polls.