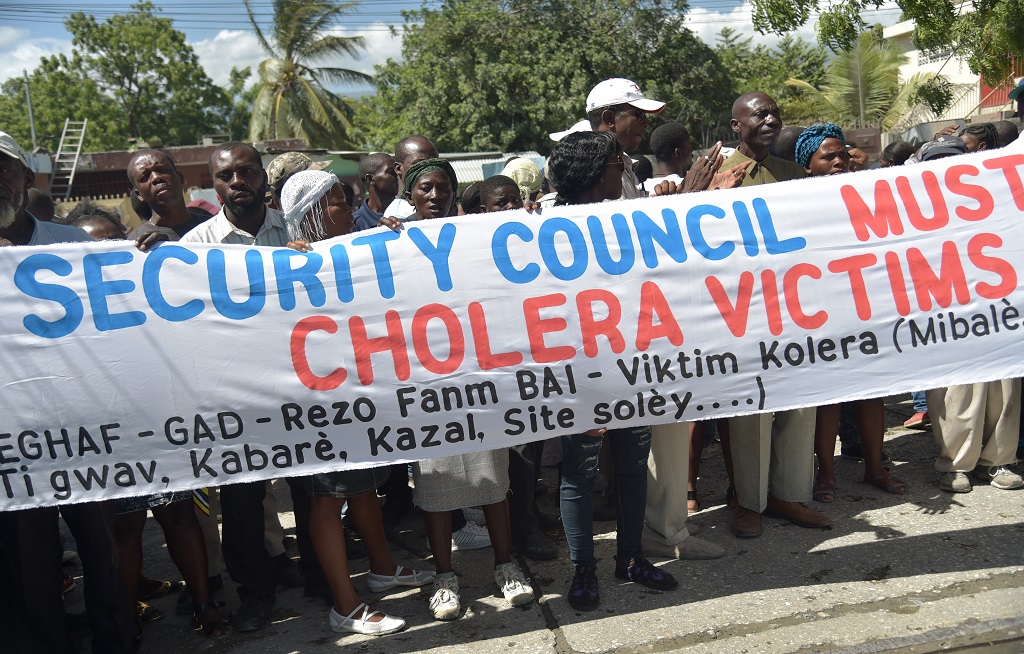 Haitian human rights activists and victims of cholera in Haiti protest in front of the Log Base of Minustah (United Nations Stabilization Mission in Haiti), in Port-au-Prince, on June 22, 2017, to demand justice and reparation.

UNITED NATIONS – The United Nations said Thursday it will ask countries to voluntarily hand over $40.5 million remaining from the budget of the soon-to-close mission in Haiti to help victims of cholera in the Caribbean country.

The General Assembly adopted a resolution endorsing a proposal from UN Secretary-General Antonio Guterres who is facing a major shortfall in the $400 million needed to help Haiti recover from the epidemic.

Guterres will ask all contributors to the peacekeeping budget to notify him within 60 days whether they will are willing to shift their share of the unspent money to the cholera fund.

The United States, the biggest financial contributor to UN peacekeeping, last month announced that it will be taking back its share of the unspent budget and will not be making a contribution to the fund.

US Deputy Ambassador Michele Sison said Washington has already provided $100 million to help Haiti respond to the cholera outbreak and that "the United States is not in a position to contribute in this way."

President Donald Trump's administration is seeking deep cuts to its funding for the United Nations and its peacekeeping missions.

The UN mission in Haiti known as MINUSTAH will shut down in October, ending a 13-year operation that fell out of favor with Haitians after infected UN peacekeepers introduced cholera. More than 9,500 people have died.

Hope for Haiti as rapid decline in cholera cases sparks hopes it will be able to stem the epidemic by 2018 https://t.co/5uaznaNfUw pic.twitter.com/Z8hr8Z4xAF

The peacekeepers from Nepal were sent to Haiti after the devastating 2010 earthquake.

Former UN secretary-general Ban Ki-moon was forced to apologize to the Haitian people for the cholera outbreak, but the United Nations insists it is not liable for the damage.

Addressing the assembly, Jamaica's Ambassador Courtenay Rattray said the United Nations must not "turn a blind eye" to Haiti's cholera crisis "which stands starkly as a stain against the good name of the United Nations."

Rattray said the funds from the mission's budget "would be small relative to the amount required" for the $400 million trust fund but that "every feasible source of funding can make a difference.

Launched in October last year, the fund has failed to draw contributions.

Only seven countries have so far contributed, Chile, France, India, Liechtenstein, South Korea, Sri Lanka and Britain, for a total of $2.67 million.

Canada and Japan have separately granted $8.5 million to help Haiti.