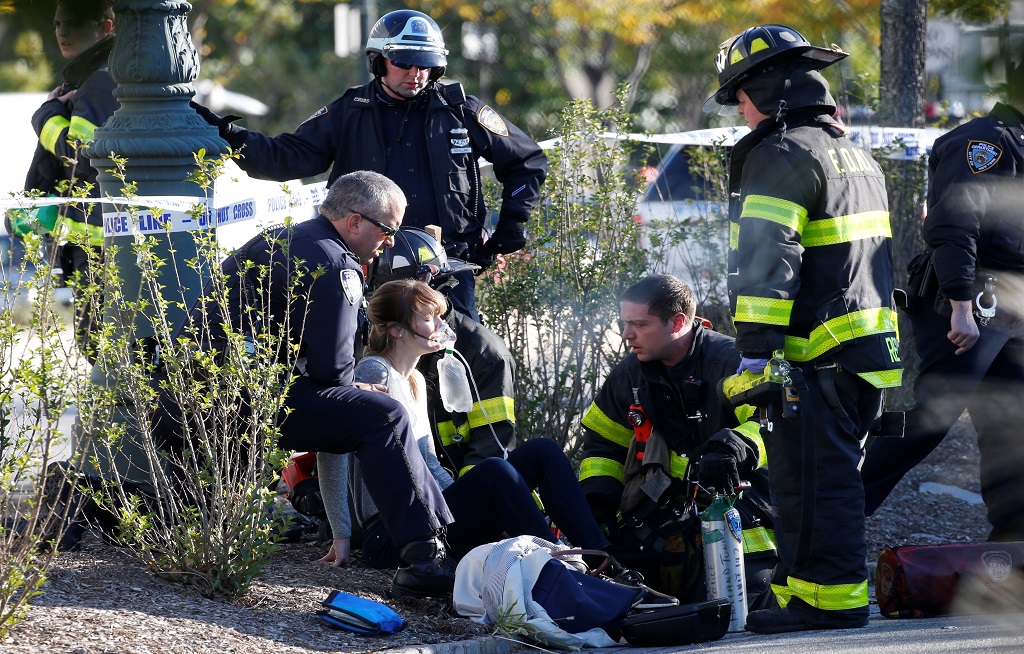 A woman is aided by first responders after sustaining injury on a bike path in lower Manhattan in New York, NY, U.S., October 31, 2017.

NEW YORK – A truck driver killed eight people in New York on Tuesday, mowing down cyclists and pedestrians, before striking a school bus in the city&39;s first deadly attack blamed on terror since September 11 2001.

Eleven others were seriously hurt when the truck driver struck in broad daylight just blocks from the 9/11 Memorial, on the West Side of Lower Manhattan, close to schools as children and their parents geared up to celebrate Halloween.

Television networks identified the 29-year-old as an Uzbek citizen living in Florida who had recently been staying in New Jersey, where the truck was rented. President Donald Trump denounced him as "very sick" and a "deranged person".

The New York City Police Department, in a post on Twitter, said that one vehicle struck another, then the driver of one of the vehicles "got out displaying imitation firearms and was shot by police".

Police said the suspect was taken into custody.

A police spokesman posted a photo showing a white pickup truck on the bike path with its front end smashed. The truck had the logo of the Home Depot hardware store chain on its door.

A witness told ABC Channel 7 that he saw a white truck drive south down the bike path alongside the West Side Highway at full speed and hit several people. The witness, who was identified only as Eugene, said bodies were lying outside Stuyvesant High School, one of the city&39;s elite public schools.

He also reported hearing about nine or 10 shots, but was not sure where they came from.

A video apparently filmed at the scene and circulated online showed scattered bikes on the bike path and two people lying on the ground.

"This was an act of terror and a particularly cowardly act of terror aimed at innocent civilians, aimed at people going about their lives who had no idea what was about to hit them," said Mayor Bill de Blasio.

The office of New York Governor Andrew Cuomo said the governor was heading to the scene.

The striking of pedestrians by a vehicle in lower Manhattan on Tuesday was being treated as a terrorist attack, two US government sources said.

The Federal Bureau of Investigation has joined the New York City police department in investigating the incident, the sources said.