US and China agree to abandon trade war: Beijing 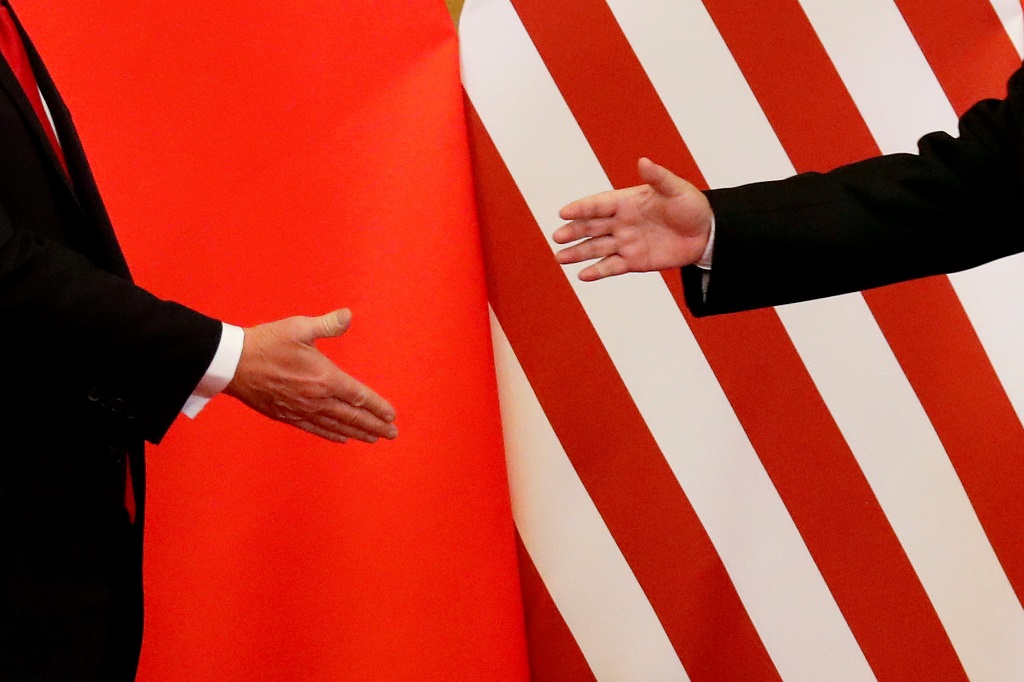 US President Donald Trump and China's President Xi Jinping shake hands after making joint statements at the Great Hall of the People in Beijing, China, November 9, 2017.

BEIJING - Washington and Beijing have agreed to abandon any trade war and back off from imposing tariffs on each other, Chinese state media report on Sunday.

The announcement comes after high-level talks in the US capital and follows months of tension over what US President Donald Trump blasted as an unfair commercial relationship between the two economic giants.

Vice-Premier Liu He, who led Chinese negotiators in Washington, said: "The two sides reached a consensus, will not fight a trade war, and will stop increasing tariffs on each other," state-run news agency Xinhua reported.

Liu called the agreement a "necessity", but added: "At the same time it must be realised that unfreezing the ice cannot be done in a day, solving the structural problems of the economic and trade relations between the two countries will take time."

The apparent detente comes after months of increasing tensions that have set markets on edge over fears of a damaging trade war.

Trump has repeatedly railed against his country&39;s trade deficit with China, describing it as a danger to US national security and threatening to impose tariffs on billions of dollars&39; worth of Chinese goods.

US levies on $50-billion (R638-billion) of Chinese imports could have come into effect as early as next week.

The talks in Washington were between delegations led by US Treasury Secretary Steven Mnuchin and Liu, who also met on Thursday with Trump. The sides had met earlier in Beijing.

"There was a consensus on taking effective measures to substantially reduce the United States trade deficit in goods with China," the joint statement said.

"To meet the growing consumption needs of the Chinese people and the need for high-quality economic development, China will significantly increase purchases of United States goods and services."

Last year, the United States had a $375.2-billion trade deficit with China, with populist politicians blaming the Asian powerhouse for the leeching of American jobs over the last few decades.

Washington reportedly had demanded the deficit be slashed by at least $200-billion by 2020.

However, the joint statement held no indication that China had assented to that target.

It said both sides had agreed on "meaningful increases" in US agriculture and energy exports. Liu said the new trade cooperation would extend to medical care, high-tech products, and finance, according to Xinhua.

They also agreed to strengthen cooperation on protecting intellectual property -- a long-standing source of US discontent.

Trump had threatened China with tariffs on up to $150-billion of imports, prompting Beijing to warn it would target US agricultural exports, aircraft, and even whiskey.

The White House is wary of hurting largely Republican-voting farm states or damaging the economy before legislative elections this November. But Trump is also keen to appear tough on trade.

On Thursday, he unleashed a barrage of criticism against former US administrations, saying they had allowed Beijing to take advantage of the United States.

"We have been ripped off by China. And an evacuation of wealth like no country has ever seen before given to another country that&39;s rebuilt itself based on a lot of the money that they&39;ve taken out of the United States," he said.

The trade issue is complicated by the impending summit meeting in Singapore between Trump and North Korean leader Kim Jong Un, who has consulted with Chinese leader Xi Jinping.

China is North Korea&39;s biggest trade partner, and Trump has called on it repeatedly to press Pyongyang to rein in its nuclear and missile programs.

The joint statement made no mention of Chinese telecom giant ZTE, which had suspended operations after US sanctions were imposed to punish it for exporting sensitive materials to Iran and North Korea.

Trump took observers by surprise last week when he tweeted that he and Xi were "working together" to find a way to help ZTE "get back into business, fast."

If the US and China face further difficulties in the future, Liu said: "We must look at them calmly, maintain dialogue and properly handle them."