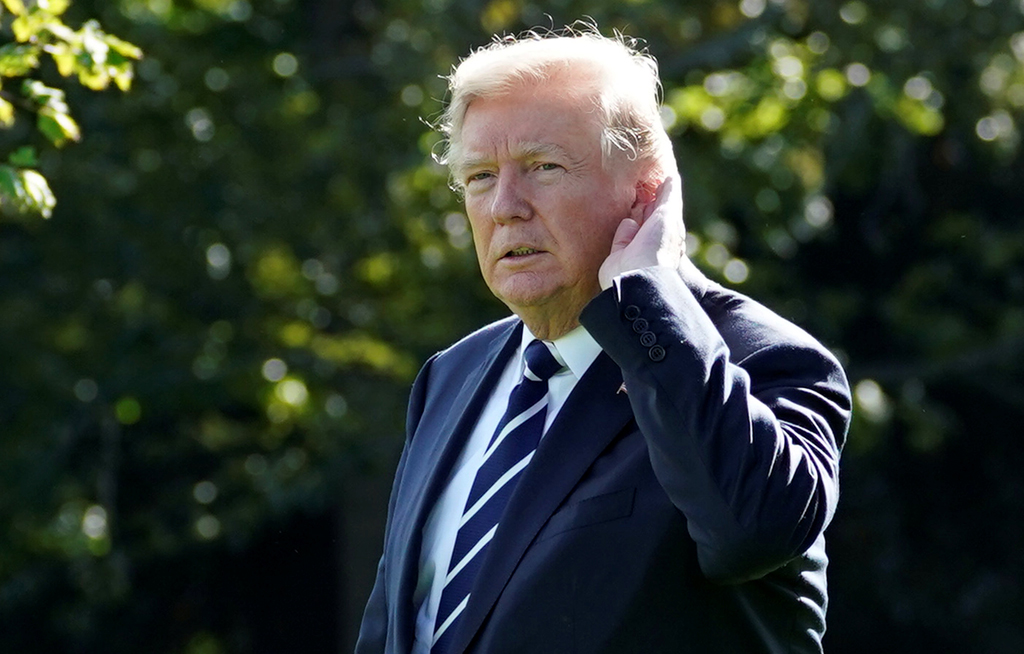 US President Donald Trump listens to reporters questions as he walks on South Lawn of the White House in Washington, US, before his departure to Greer, South Carolina, October 16, 2017.

UNITED NATIONS - The US on Monday vetoed a draft UN resolution rejecting President Donald Trump&39;s decision to recognise Jerusalem as Israel&39;s capital, after all 14 other Security Council members backed the measure.

The veto cast by US Ambassador Nikki Haley highlighted Washington&39;s isolation over Trump&39;s announcement that the US embassy will be moved from Tel Aviv to Jerusalem, effectively ignoring Palestinian claims on the city.

Soon after the clash at the top UN body, the White House announced that US Vice President Mike Pence was delaying a trip to the Middle East planned for this week.

Key US allies Britain, France, Italy, Japan and Ukraine were among the 14 countries in the 15-member council that voted in favor of the measure put forward by Egypt.

The draft resolution reaffirmed that Jerusalem is an issue "to be resolved through negotiations" and that any decisions on the status of Jerusalem "have no legal effect, are null and void and must be rescinded."

"The US will not be told by any country where we can put our embassy," Haley told the council after the veto.

"What we witnessed here today in the Security Council is an insult. It won&39;t be forgotten," she said, describing the measure as "one more example of the UN doing more harm than good in addressing the Israeli-Palestinian conflict."

To win the 14 votes, the text was watered down with no condemnation and no specific mention of Trump&39;s move. Instead, it expressed "deep regret at recent decisions concerning the status of Jerusalem."

Resolutions presented to the council require nine votes for adoption, but the United States - along with Britain, China, France and Russia - have the power to veto any measure.

The Palestinians slammed the veto as "unacceptable" and vowed to turn to the UN General Assembly to win adoption for the resolution that was blocked at the council. No country has veto powers in the 193-nation assembly.

"Regrettably one state decided to oppose the whole world and to stand against the whole world with regard to this long-standing issue," Palestinian ambassador Riyad Mansour told the council.

Pence&39;s trip to Egypt and Israel was pushed back to mid-January to allow the US vice president to remain in Washington during a vote on Trump&39;s tax bill, a White House official said.

Palestinian president Mahmud Abbas had already scrapped a meeting with Pence and his Fatah faction had called for mass protests during the visit which had been initially been scheduled for Wednesday.

Israel seized control of the eastern part of the city in the 1967 Middle East war and sees all of Jerusalem as its undivided capital. The Palestinians view the east as the capital of their future state.

The draft resolution had included a call on all countries to refrain from opening embassies in Jerusalem, reflecting concerns that other governments could follow the US lead.

Washington&39;s closest allies, France and Britain, came out ahead of the vote to declare their backing for the measure, which they stressed was in line with positions enshrined in UN resolutions adopted over several decades.

Several UN resolutions call on Israel to withdraw from territory seized during the 1967 war.

The status of the city must be decided through negotiations and "not by the unilateral decision of a third country that would bring us back a century," said French Ambassador Francois Delattre.

The US veto came nearly a year after the previous US administration abstained in a council vote condemning Israeli settlements, allowing that measure to pass.

Haley, who used her veto power for the first time as US ambassador, stressed that the US still supports a two-state solution "if that&39;s what the parties agree to."

The Palestinian envoy led a group of Arab ambassadors in a meeting with Miroslav Lajcak, the president of the General Assembly, to schedule a vote on the draft resolution, probably on Thursday.

Resolutions by the General Assembly are non-binding, but a strong vote in support of the resolution would carry political weight.