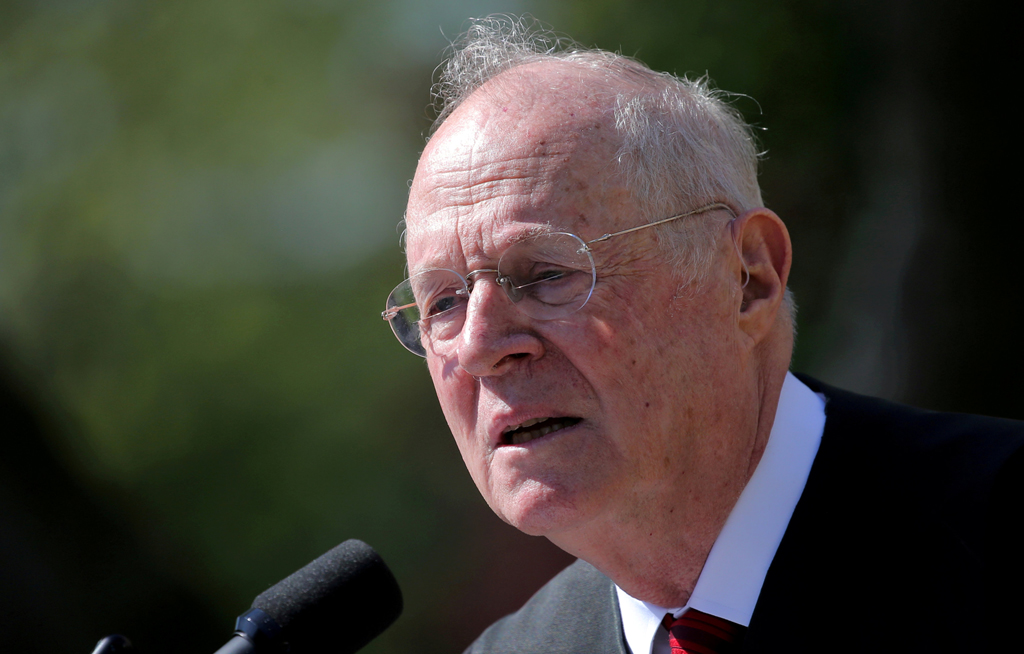 FILE PHOTO: Supreme Court Associate Justice Anthony Kennedy speaks during a swearing in ceremony for Judge Neil Gorsuch as an associate justice of the Supreme Court in the Rose Garden of the White House in Washington, USon April 10, 2017.

WASHINGTON - The White House declined to comment Sunday on speculation that a pivotal US Supreme Court justice might announce his retirement on Monday, the last day of the high court's current session.

Justice Anthony Kennedy, who has cast the decisive vote in some of the court's most far-reaching decisions, turns 81 next month and is widely believed to be thinking of retiring.

When asked about that, White House adviser Kellyanne Conway told ABC: "I will never reveal a conversation between a sitting justice and the president or the White House, but we're paying very close attention to these last bit of decisions."

One of those decisions could come Monday, if the nine justices are prepared to rule on a White House challenge to lower-court findings blocking Trump's attempt to limit travel from six predominantly Muslim countries.

The court could also delay its recess to allow more time to consider the case, or even put it off to the fall session.

Two federal appeals courts have so far ruled against the travel ban, with one saying it violated laws against religious discrimination and another finding that Trump had exceeded his authority on immigration matters.

The original ban and a later revised order, both blocked by courts, represented one of Trump's most controversial actions. They sparked global condemnation and through travel from the targeted countries -- Iran, Iraq, Libya, Somalia, Sudan, Syria and Yemen -- into turmoil. Iraq was removed in the second version of the ban.

Kennedy, who was appointed to the high court by President Ronald Reagan in 1988, has often cast a "swing" vote from the bench.

He typically sides with conservatives on economic matters, gun control and voting rights, but with liberal justices on social issues like gay rights, the death penalty and abortion.

It was Kennedy who wrote the decision establishing a constitutional right to same-sex marriage nationwide.

Speculation about a Kennedy retirement was sparked partly because he was slow to hire clerks for the court's next term.

If he does step down, Trump would have a chance to deepen his mark on the nation's judiciary with the opportunity to pick another nominee for a lifetime appointment to the bench.

His first nominee, Neil Gorsuch -- once a clerk to Kennedy -- joined the court in April.

Republicans hold a 52-48 majority in the Senate, and under rules they passed to expedite Gorsuch's confirmation they would need only a simple majority to fill the next court vacancy.

But a strongly conservative successor to Kennedy could push the court firmly to the right, and Democrats say they would fight such a pick fiercely.

"I expect Armageddon on the next one," Republican Senator Orrin Hatch said after the Gorsuch confirmation, "because that's going to change... the direction of the court" far into the future.