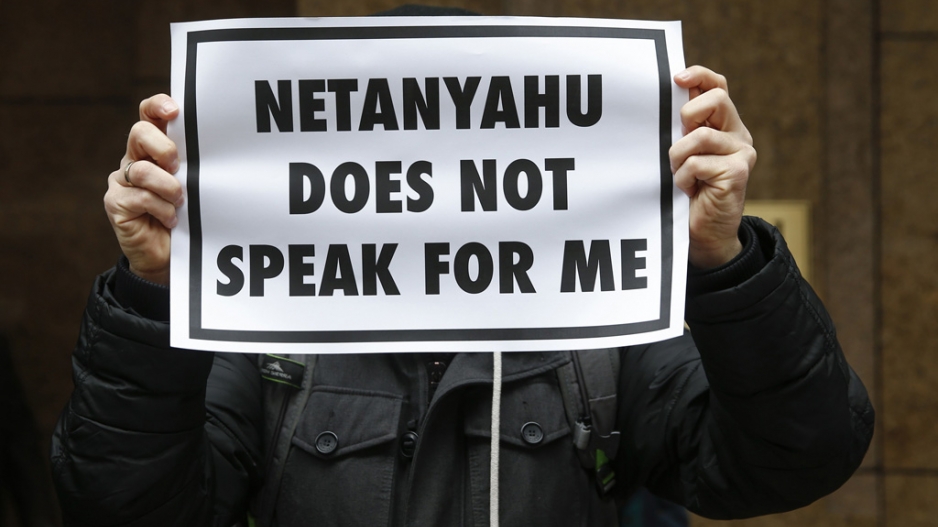 A demonstrator holds a sign during a rally near the Israeli Consulate in New York March 3, 2015.

WASHINGTON – A corner stone of US foreign policy has long been unwavering support for Israel, but will a very public spat between the countries&39; leaders damage that friendship?
Israeli Prime Minister Benjamin Netanyahu drew sustained applause and numerous standing ovations on Tuesday from members of the US Congress.
But as the Israeli premier sought to influence negotiations over Iran&39;s nuclear programme, the audience for his remarks at the other end of Washington&39;s Pennsylvania Avenue was less than impressed. US President Barack Obama dismissed Netanyahu&39;s speech as offering nothing new.
"Prime Minister Netanyahu has not offered any kind of viable alternative that would achieve the same verifiable mechanisms to prevent Iran from getting a nuclear weapon," he told reporters.
Netanyahu for his part painted the US as standing on the precipice of a deal that would "guarantee" that Iran eventually obtains a nuclear bomb and sets off an arms race in the region.
The gulf between the leaders is nothing new, with the pair disagreeing on how Iran&39;s nuclear programme must be dealt with since Obama first took office. Netanyahu was even less than shy about his longtime friendship with Mitt Romney, Obama&39;s challenger in the 2012 presidential elections.
The invitation by Speaker of the House John Boehner, a Republican, for Netanyahu to address Congress came without the White House&39;s knowledge and heightened tensions both between the countries and between a White House and Republican-controlled Congress already at odds over Iran.
The administration derided the move as an attempt to politicise the US-Israeli relationship and for Netanyahu to score points ahead of elections at home in two weeks&39; time.
Observers characterised the most recent spat as a new low, even as both men took pains to underline the importance they place on US-Israeli relations.
"This is big," said Robert Danin of the Council on Foreign Relations, noting "something qualitatively different taking place" with a concern that Netanyahu is aligning himself with Republicans against Obama.
"The result of this is to make partisan the nature of American support for Israel."
Dozens of Democrats sided with the president and chose to boycott the speech, while others attended but expressed outrage.
Democratic minority leader Nancy Pelosi described herself as brought "near tears" by the speech, "saddened by the insult to the intelligence of the United States as part of the P5+1 nations, and saddened by the condescension toward our knowledge of the threat posed by Iran and our broader commitment to preventing nuclear proliferation".
Boehner lauded Netanyahu for demonstrating "why there is such deep-seated – and bipartisan – concern about the deal that is being made."
Following Netanyahu&39;s remarks, Senate majority leader Mitch McConnell said the Senate would vote next week on a measure that would require Congress to approve any nuclear deal – something Obama hopes to avoid.
Lawmakers from both parties have pushed for tougher sanctions on Iran despite White House warnings sanctions could scuttle negotiations.
Ultimately, despite threats by lawmakers and calls by Israel, Obama remains focused on reaching the framework of a deal by later this month.
As if to illustrate that point, far from the political theatre on Tuesday in Washington, Secretary of State John Kerry was in Switzerland for talks with his Iranian counterpart, Mohammad Javad Zarif, to overcome hurdles to a deal.
For a detaile story, watch the video above.