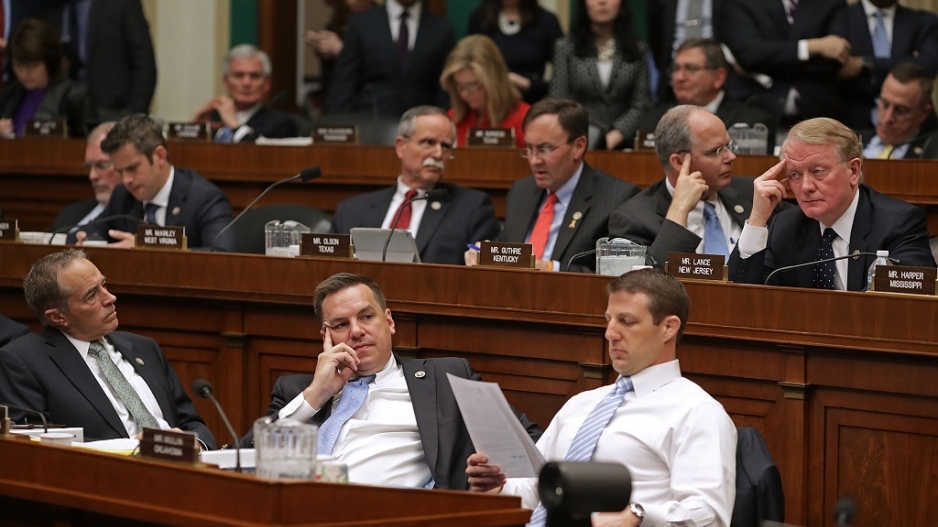 Republican members of the House Energy and Commerce Committee work on the proposed American Health Care Act, the Republican attempt to repeal and replace Obamacare, in the Rayburn House Office Building on Capitol Hill on March 8, 2017 in Washington, DC.

The vote is on a razor's edge. After weeks of in-party feuding, and mounting pressure from the White House for Congress to deliver Trump a big legislative victory, Republican leaders say they now have the votes to pass the controversial measure.

It is a conservative dream seven years in the making: repealing and replacing Obama's Affordable Care Act, which Republicans accuse of sending health premiums soaring while reducing options for millions of Americans.

Republicans including Trump have campaigned relentlessly on the pledge to dismantle the 2010 reforms.

Democrats counter that Obamacare, as it is known, helped 20 million Americans gain health coverage and saved thousands of lives by barring insurers from denying policies to people with pre-existing conditions.

An earlier version of the Republican plan to repeal Obamacare collapsed in March, torpedoed by opposition from both moderates and conservatives in the party -- dealing Trump one of the most stinging setbacks since he took office.

Democrats note that many Republicans acknowledge they have not yet read the revised bill.

House Speaker Paul Ryan, who is accused of maintaining a veil of secrecy around the process, defended the urgency of the move by pointing to two more health care providers announcing they will pull out of the exchanges set up under Obamacare, in the state of Virginia.

"If Obamacare remains the law of the land, things will only get worse, leaving thousands of Americans without options for affordable, quality health care coverage," Ryan added in a statement.

The American Medical Association has issued a scathing rebuke of the latest Republican effort, warning that it would lead millions of Americans to lose their health care.

With no Democrats supporting the revision, Republicans alone will need to cobble together the 216 votes necessary to pass in the House. They can afford just 22 defectors.

The party leadership apparently won over enough sceptical members with an amendment that adds $8 billion over five years to help cover insurance costs for people with pre-existing conditions.

The funds would be used to help fund "high-risk pools" aimed at absorbing some of the costs for people with expensive conditions, like cancer.

Critics and health experts slammed the figure as woefully insufficient to cover the enormous cost they say would be associated with high-risk pools.

"My colleagues who have been won over by this should be ashamed of themselves," Democrat Jim McGovern fumed on the House floor, describing the $8 billion fix as "futile."

"The $8-billion (R108-billion) amount is a pittance. Spread over five years, it's a fifth of a pittance," Mercatus research fellow Robert Graboyes said.

Should the bill pass, it faces a steep path in the Senate, where Republican moderates are almost certain to introduce changes.

That would trigger negotiations between House and Senate members in a bid to get the bill over the line -- with an outcome that remains far from certain.