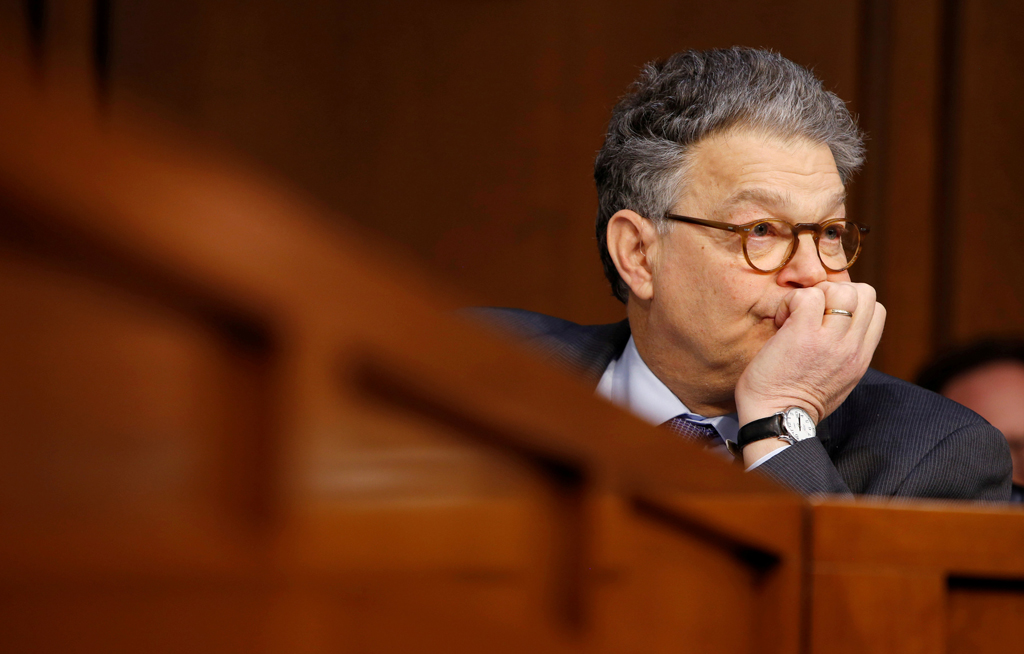 WASHINGTON - US Senator Al Franken said Thursday he will resign in the face of multiple accusations of sexual misconduct, becoming the second prominent Democrat forced out in a week over the snowballing harassment allegations convulsing the country.

But in an emotional and defiant address from the Senate floor, the comedian-turned-lawmaker also delivered a parting shot at President Donald Trump and Republican politician Roy Moore, who is running for the Senate despite being accused of molesting teenagers.

Facing a groundswell of demands to resign from within his own party ranks, Franken acknowledged his position had become untenable, but also insisted he remained a "champion" of women and that some of the accusations against him "are simply not true."

"There&39;s been a very different picture of me painted over the last few weeks," said the 66-year-old Minnesota lawmaker. "But I know who I really am."

"I know in my heart that nothing I have done as a senator - nothing - has brought dishonour on this institution."

"Nevertheless, today I am announcing that in the coming weeks, I will be resigning as a member of the United States Senate."

The once-popular lawmaker, who made his name on the late-night comedy show Saturday Night Live, last month acknowledged and apologised for one incident of sexual misconduct, vowing to work to regain public trust.

The allegation, dating back to 2006, was made by sports broadcaster and former model Leeann Tweeden, who said Franken forcibly kissed her, and touched her through a flak jacket as she slept, during a tour entertaining US troops deployed in Afghanistan.

But with six other women since reportedly coming forward to accuse Franken of touching them inappropriately, Democrats told him it was time to go.

In announcing his resignation, Franken also took direct aim at Trump - who has faced multiple allegations of harassment - and at Alabama politician Moore, who received the president&39;s endorsement ahead of a special election next week despite accusations he molested underage girls when he was in his 30s.

"I, of all people, am aware that there is some irony in the fact I am leaving while a man who bragged on tape about his history of the sexual assault sits in the Oval Office, and a man who repeatedly preyed on young girls campaigns for the Senate with the full support of his party," Franken said.

On Thursday night, Republican Congressman Trent Franks of Arizona also announced his resignation amid media reports that he had asked two female staffers to be surrogates to help him and his wife have a third child.

The couple had twins through surrogacy and when a subsequent attempt failed, Franks, a staunch conservative, discussed the topic with his aides, the lawmaker said in a statement announcing his resignation effective January 31.

"Due to my familiarity and experience with the process of surrogacy, I clearly became insensitive as to how the discussion of such an intensely personal topic might affect others," he said, without specifying whether he had asked them to serve as surrogates, or discussed the topic in general.

For Franken, Minnesota&39;s governor, Democrat Mark Dayton, said he expected to announce a decision on a replacement to fill the senator&39;s vacant seat in the coming days.

And it follows a torrent of accusations of harassment that have felled powerful figures in entertainment, media and politics, triggered by the claims targeting movie mogul Harvey Weinstein.

Franken&39;s accuser Tweeden acknowledged his decision to stand down.

"While I do not celebrate Senator Franken&39;s resignation, we cannot tolerate hypocrisy," she said. "We must be able to trust and respect our leaders."

Female senators had led the revolt against Franken, as allegations against him mounted, taking to social media to demand his resignation.

Senator Kirsten Gillibrand sounded the opening salvo, declaring that the nation - and Congress - faced a "moment of reckoning" regarding sexual misconduct.

In the wake of Sen. Al Franken&39;s resignation, some of his accusers of sexual misconduct say they are disappointed with his defense of the allegations https://t.co/ltp6kVK3WO pic.twitter.com/CKd4FPcubL

She appeared visibly upset during Franken&39;s speech. Several other Democrats surrounded him and offered hugs and handshakes when he finished.

But despite the emotional farewells, Franken&39;s resignation was the result of a dramatic and sudden show of unity against one of their own in the 100-member chamber, where the Republicans hold a slim majority.

Diane Feinstein, one of the longest-serving women in the Senate, described it as a turning point.

"I think we&39;re in the midst of a huge cultural shift, and that things that happened years ago, that women were afraid to do anything about - that fear no longer exists. And women will come forward" with their accusations, Feinstein told AFP.

"We&39;re not that far ahead. There&39;s no Machiavellian thinking going on here," Carper told reporters.

"This is just an instance where someone has behaved badly."