US senators in Russia ahead of Putin-Trump summit 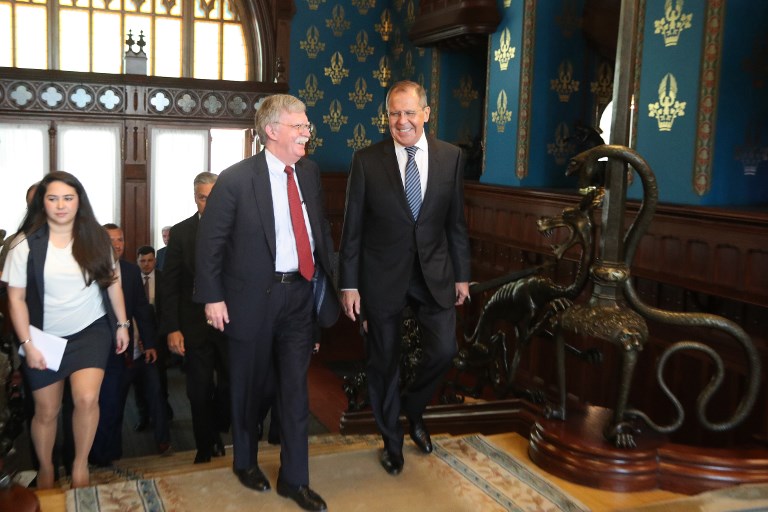 This Handout photo released by the Russian Ministry of Foreign Affairs shows Russian Foreign Minister Sergei Lavrov (R) and US National security advisor John Bolton as they arrive at the Kremlin before talks in Moscow on June 27, 2018.

MOSCOW – Republican US senators met with Russia&39;s Foreign Minister Sergei Lavrov on a rare visit to Moscow Tuesday ahead of a summit between the countries&39; presidents Vladimir Putin and Donald Trump.

The US delegation is in Russia until Thursday, ahead of the summit planned in Helsinki on July 16, at a time of high tension between Russia and the West.

"We recognise that the world is better off, I believe, if Russia and the US have fewer tensions, get along a little better, maybe put aside some differences," Senator Richard Shelby said during Tuesday&39;s meeting with Lavrov at the Russian foreign ministry.

"We are competitors, but we don&39;t necessarily need to be adversaries," said Shelby, a Republican senator from Alabama, in televised comments.

"We&39;re hoping that coming out of the Putin-Trump meeting in Helsinki, it will be the beginning, maybe, of a new day," Shelby added. "We will have to wait and see."

Lavrov, speaking in English, said he hoped that the US senators&39; visit "will symbolise the resumption of relations between the (US and Russian) parliaments."

"I think the resumption of dialogue is going to be a very timely event on the eve of the forthcoming meeting between the two presidents," he added.

The senators were due to meet representatives of Russia&39;s lower and upper houses of parliament later on Tuesday.

Lavrov also congratulated the delegation on the forthcoming US Independence Day and wished them well on hosting the 2026 FIFA World Cup. Russia is currently hosting this year&39;s tournament.

Kremlin spokesman Dmitry Peskov said there was no plan for the senators to meet with Putin.

He said the Kremlin was "very satisfied" that the senators were visiting Russia.

"We are convinced that inter-parliamentary links are one of the most important factors in bilateral ties," he told reporters.

The head-to-head between the US and Russian leaders will follow a delicate NATO summit in Brussels.

Trump has expressed scorn for the alliance and is expected to upbraid European NATO members for not spending enough on their own defence.