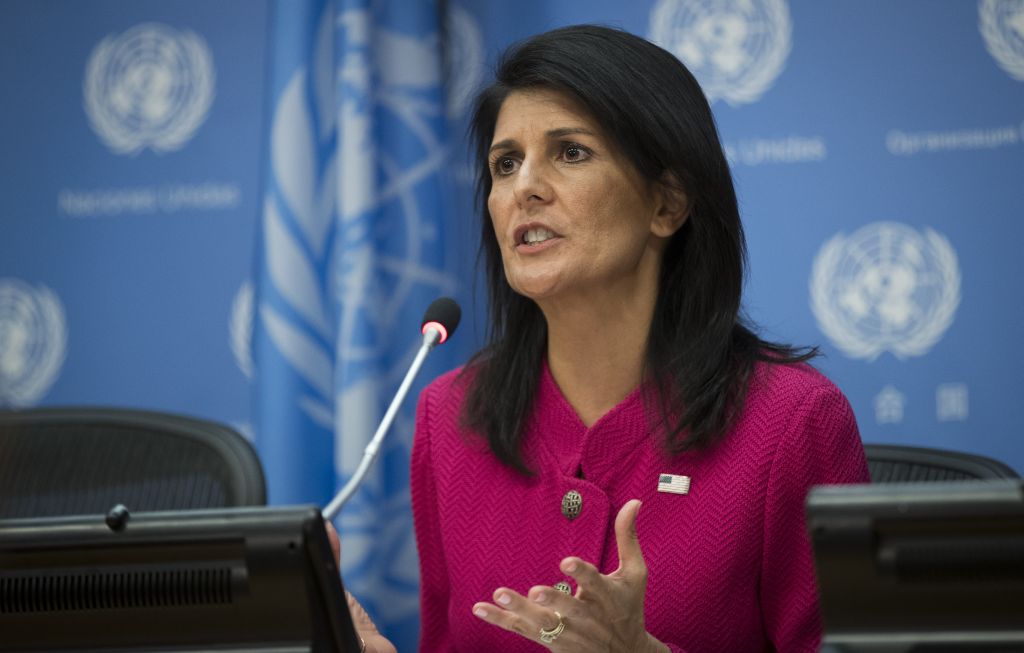 U.S. Ambassador to the United Nation Nikki Haley answers questions during a press briefing at the United Nations headquarters, April 3, 2017 in New York City. Haley will serve as U.N. Security Council President for the month of April.

UNITED NATIONS - The United States warned that North Korea&39;s leadership will be "utterly destroyed" if war breaks out as it called on countries to cut all diplomatic and trade ties with North Korea -- including Chinese oil shipments to Pyongyang.

Washington urged tough action at an emergency meeting of the Security Council held Wednesday to respond to North Korea&39;s launch of an intercontinental ballistic missile (ICBM).

"The dictator of North Korea made a choice yesterday that brings the world closer to war, not farther from it," US Ambassador Nikki Haley told the council.

"If war comes, make no mistake: The North Korean regime will be utterly destroyed."

US President Donald Trump derided Kim Jong-Un as a "sick puppy" and threatened "major" new sanctions after Pyongyang tested its third ICBM -- which it claimed was capable of striking anywhere in the United States.

The test ended a two-month lull in missile tests that had raised hopes for the opening of diplomatic talks. The North said the weapon could land anywhere in the continental United States -- a claim some experts said was feasible.

Kim said the test of the Hwasong-15 weapons system had helped his country achieve the goal of becoming a full nuclear power, sparking global condemnation.

"We call on all nations to cut off all ties with North Korea," Haley told the council.

She said Trump had called Chinese President Xi Jinping and urged him to "cut off the oil from North Korea", a move that would deal a crippling blow to North Korea&39;s economy.

"That would be a pivotal step in the world&39;s effort to stop this international pariah," she said, warning that if Beijing does not act, "we can take the oil situation into our own hands."

The United States earlier pressed for a full oil embargo on North Korea after it tested its most powerful nuclear bomb to date in September, but dropped that demand in negotiations on a sanctions resolution with China.

The Security Council met at the request of the United States, Japan and South Korea to consider next steps after three rounds of sanctions adopted in the past year failed to push North Korea to change course.

Trump -- who had traded barbs with Kim for months -- asked Xi to use "all available levers" to press the hermit state.

"Additional major sanctions will be imposed on North Korea today. This situation will be handled!" Trump tweeted.

China&39;s foreign ministry sidestepped questions about the US call for an oil embargo, with spokesman Geng Shuang telling reporters that Beijing upholds UN resolutions and backs the denuclearization of the Korean Peninsula.

Beijing has backed a slew of sanctions that include bans on imports of North Korean coal, iron ore and seafood. The UN also barred the hiring of North Korean guest workers and capped exports of refined petroleum products.

But China has refused to turn off its pipeline shipping crude to North Korea.

Beijing fears that taking tougher actions could cause the regime to collapse, triggering a refugee crisis across its border with the North and eliminating a strategic buffer separating China from the US military in South Korea.

China has proposed that the North stop missile and nuclear tests in exchange for a freeze of US military exercises -- a suggestion Washington has repeatedly rejected.

There are also concerns in Seoul -- which is within range of Pyongyang&39;s artillery -- that Trump might be considering military action against the North that could trigger a full-scale war.

Last week, Trump announced new US unilateral sanctions on Pyongyang and returned it to a US list of state sponsors of terror.

Russian Ambassador Vassily Nebenzi urged Washington "to revise its policy of mutual threats and intimidation," saying it was "essential to take a step back."

Canada said it would host a meeting of foreign ministers to discuss the North Korean threat.