US wants to improve police practices 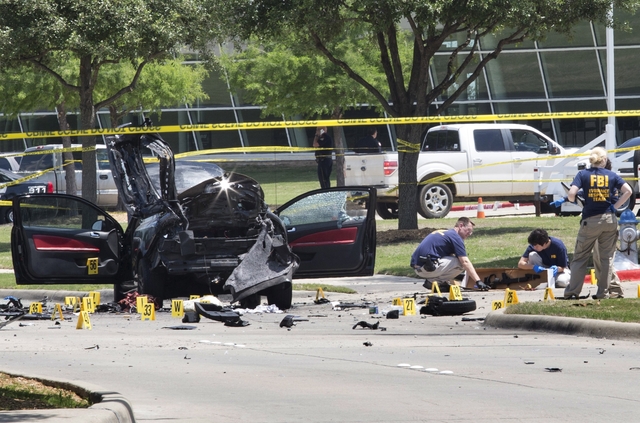 Local police and FBI investigators collect evidence, where two gunmen were shot dead in Garland, Texas May 4, 2015. The gunmen opened fire outside an exhibit of caricatures of the Prophet Mohammad that was organised an anti-Islamic group.

GENEVA - The United States acknowledged Monday more needed to be done to uphold its civil rights laws following a string of recent killings of unarmed black men by police.

Speaking before the United Nations Human Rights Council, a US representative stressed the advances his country had made in establishing a range of civil rights laws over the past half century.

But referring to a long line of recent cases of alleged abuse of African Americans by police, James Cadogan, a senior counsellor in the justice department&39;s civil rights division, admitted that "we must rededicate ourselves to ensuring that our civil rights laws live up to their promise."

"The tragic deaths of Freddie Gray in Baltimore, Michael Brown in Missouri, Eric Garner in New York, Tamir Rice in Ohio, and Walter Scott in South Carolina have... challenged us to do better and to work harder for progress," he said.

The United States was undergoing a so-called Universal Periodic Review of its rights record -- which all 193 UN countries must undergo every four years.

The US delegation, headed by US ambassador to the council Keith Harper and acting US legal advisor Mary McLeod, faced a range of questions from diplomats about law enforcement tactics, police brutality and the disproportionate impact on African Americans and other minorities.

The half-day review in Geneva came after the US justice department on Friday launched a federal civil rights investigation into whether police in Baltimore have systematically discriminated against residents, following the death of 25-year-old Freddie Gray in police custody last month.

Six police officers have been charged in connection with Gray&39;s arrest and death. One faces a second-degree murder charge.

"When federal, state, local or tribal officials willfully use excessive force that violates the US Constitution or federal law, we have authority to prosecute them," he said, pointing to criminal charges brought against more than 400 law enforcement officials over the past six years.

Also on the agenda during Monday&39;s review was the continued use of the death penalty, and the US record on addressing its "war on terror" legacy, including Washington&39;s failure to close the Guantanamo Bay detention centre in Cuba and CIA torture revelations.

"As President (Barack) Obama has acknowledged, we crossed the line, we did not live up to our values, and we take responsibility for that," McLeod said of the past cases of CIA torture, detailed in an explosive Senate report last December.

"We have since taken steps to clarify that the legal prohibition on torture applies everywhere and in all circumstances, and to ensure that the United States never resorts to the use of those harsh interrogation techniques again," she said.