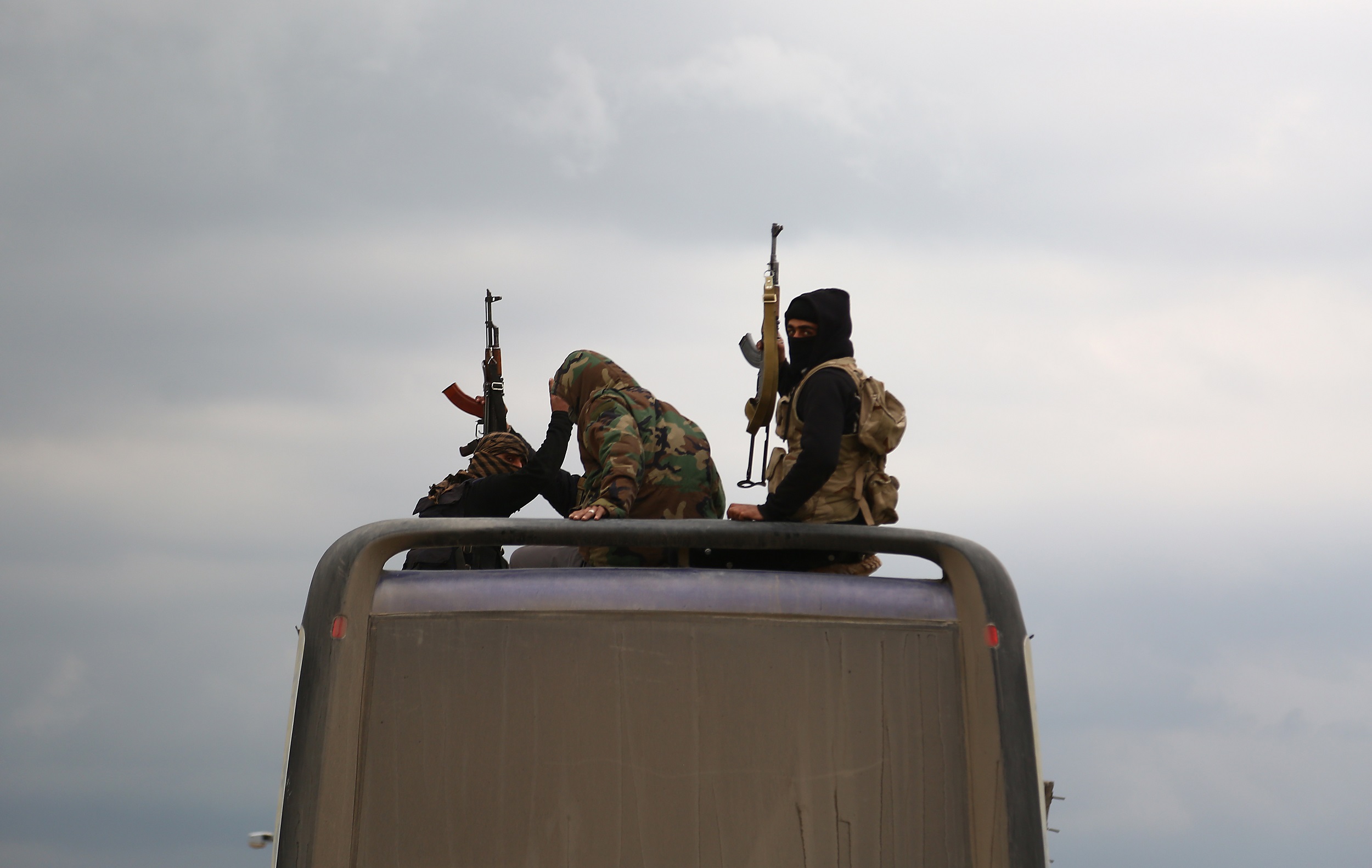 Buses carrying Jaish al-Islam fighters and their families from their former rebel bastion of Douma, arrive at the Abu al-Zindeen checkpoint controlled by Turkish-backed rebel fighters.

WASHINGTON - The US maintained the threat of missile strikes on Wednesday in response to alleged chemical attacks in Syria, despite the risk of triggering a head-on clash with Damascus ally Russia.

In the face of intense world outrage, the United Nations Security Council failed to agree a global response to the incident on Tuesday, after Washington and Moscow opposed each other&39;s rival motions to set up an international investigation into chemical weapons use in the seven-year-old conflict.

Trump has made it clear he plans to make the Syrian regime of Bashar al-Assad, and perhaps his Russian and Iranian backers, pay for the latest alleged toxic gas atrocity in the war-wracked country.

According to rescue workers, on Saturday more than 40 people died in the rebel-held Damascus suburb of Douma in an alleged chemical attack, which left victims struggling to breathe, foaming at the mouth and with discolored skin.

The United States, Britain and France have argued the incident bears all the hallmarks of a strike ordered by the regime of Russia&39;s ally Assad, which has been blamed for previous attacks by the Organisation for the Prohibition of Chemical Weapons (OPCW).

Trump has warned there would be a "big price to pay", and Washington&39;s UN ambassador Nikki Haley made it clear that the failure to secure a Security Council vote would not hold America and its allies back.

"Russia has trashed the credibility of the council," she said. "Whenever we propose anything meaningful on Syria, Russia vetoes it. It is a travesty."

Haley dismissed the Russian draft as "all about protecting the Assad regime" because of provisions that would have required the Security Council to endorse its findings -- in other words, giving Russia a veto over any attempt to apportion blame.

Russia, in turn, vetoed the US-backed motion, which would have re-established an international Joint Investigative Mechanism (JIM) to probe chemical strikes in Syria and to identify culprits.

Moscow&39;s UN ambassador Vassily Nebenzia accused Haley of seeking a vote to provide cover for a Western military strike on Assad, which now seems all the more likely.

"If you took the decision to carry out an illegal military adventure, and we do hope that you will come to your senses, well then you will have to bear responsibility for it," he said.

Both Trump and his defense secretary Jim Mattis abruptly cancelled upcoming travel plans Tuesday, as the USS Donald Cook -- a guided-missile destroyer -- moved to within striking range of Syria.

The air traffic control agency Eurocontrol has also released an alert from the European Aviation Safety Agency to flight operators in nearby airspace.

"Due to the possible launch of air strikes into Syria with air-to-ground and / or cruise missiles within the next 72 hours, and the possibility of intermittent disruption of radio navigation equipment, due consideration needs to be taken when planning flight operations in the Eastern Mediterranean / Nicosia FIR area," it said.

French President Emmanuel Macron, who has been coordinating closely with Washington, said he would decide on a response "in the coming days."

"Our decision will not target allies of the regime or attack anyone but rather attack the regime&39;s chemical capabilities," he said, insisting he did "not want an escalation."

As it looked to head off the threat of Western strikes, Syria said it had invited the OPCW to visit the site of the alleged attack in Douma, a settlement in the Damascus suburb of Eastern Ghouta that is falling to the regime after a long and bloody siege.

The OPCW said it would "shortly" deploy a fact-finding team to Douma for an investigation, but US officials said they were working from their own information and would not necessarily hold back.

Damascus also mobilized overnight Tuesday, according to the Syrian Observatory for Human Rights, which said the army had "put all military positions on alert, including airports and all bases, for a period of 72 hours."

A source from a pro-regime unit told AFP Tuesday there were "precautionary measures being taken by the Syrian army, especially the airports and military bases."

Residents in the capital were also bracing for a potential response.

"I have lived through seven American presidents, but Trump is the craziest and his administration is unbalanced," said Abu Fadi, 70.

"I think his threats are to be feared, and we should take them seriously."