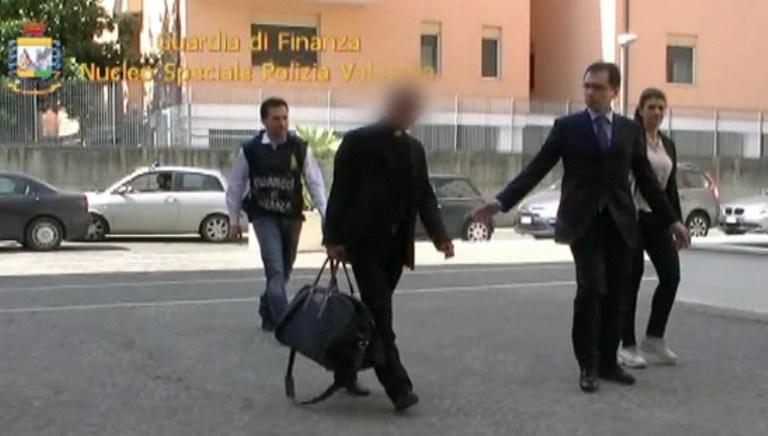 This handout picture taken from a video released by the Guardia di Finanzia Italian police on June 28, 2013 shows Nunzio Scarano (front-L) escorted by policemen after being arrested the same day in Rome.

ROME - The trial of a senior cleric accused of corruption and attempted money laundering at the scandal-plagued Vatican bank opened in Rome on Tuesday, Italian media reported.
The court immediately postponed the trial of Nunzio Scarano to December 13, when the first witnesses for the prosecution will be heard, the reports said.
Scarano, who was not present in court, was arrested in June on suspicion of having acted as an intermediary for suspect transactions at the Vatican bank -- otherwise known as the Institute for Religious Works (IOR).
The prosecution accuses Scarano of acting as a front for suspicious payments made through the Vatican bank and "interrupting the traceability of money."
Investigators allege Scarano had used Vatican bank accounts to make transfers on behalf of his friends, including an attempt to move 20-million euros ($26-million) on behalf of a Neapolitan shipowning family.
His lawyers insist that "Mr. 500" -- as the cleric was nicknamed for the large amounts of 500 euro notes he was reported to carry on him -- kept Church donations in several accounts he owned at the bank.
The prelate, who worked for years as an accountant for APSA, an agency that manages Vatican assets, has repeatedly proclaimed his innocence.
He is currently under house arrest in Salerno in southern Italy, according to the Corriere Del Mezzogiorno newspaper.
In a letter addressed to Pope Francis in July, the prelate accused cardinals of covering up irregular financial activities carried out by his superiors.
The IOR, which does not lend money, handles funds for all the Vatican departments, Catholic charities and congregations as well as priests and nuns around the world, and manages assets of some 7-billion euros ($9.3-billion).
According to the Vatican&39;s Financial Intelligence Authority, there were six reports of suspicious financial activity in the Vatican in 2012.