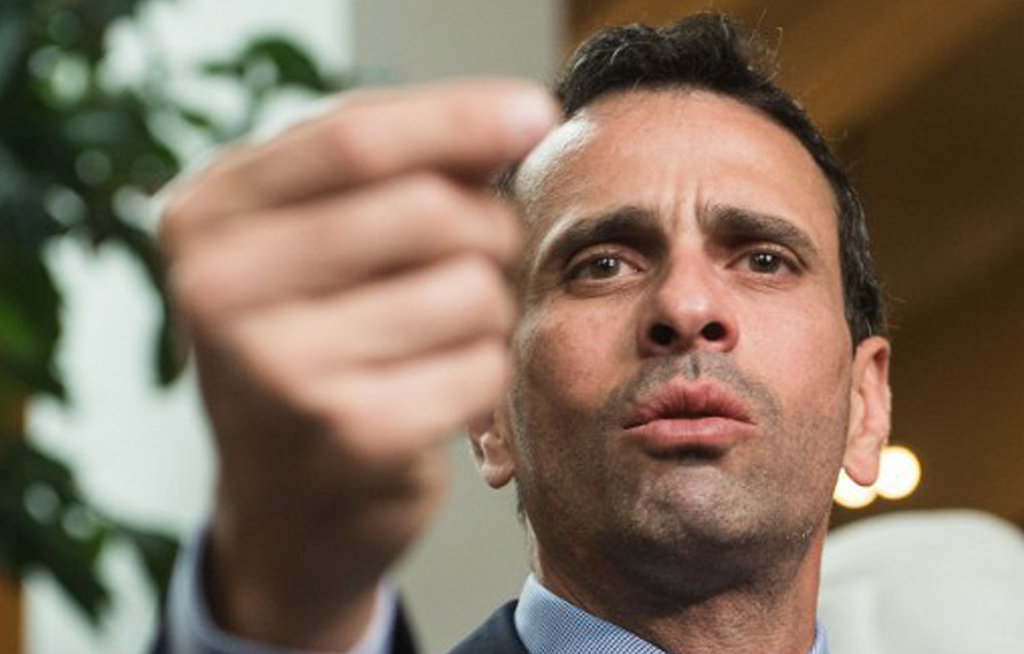 CARACAS - Venezuelan opposition leader and two-time presidential candidate Henrique Capriles said on Friday he has been banned from holding political office for 15 years, a move that could galvanise protests against the leftist government.

It was not clear why authorities took action against Capriles. But the punishment deals a blow to the opposition after stepped-up protests this week and accusations that President Nicolas Maduro was leading the country to dictatorship and cracking down on dissent.

A ban on holding office would stop Capriles from running for president again in elections currently scheduled for late 2018.

It would also likely fuel anger ahead of an opposition protest planned for Saturday after a string of violent marches, spurred by the Supreme Court assuming control of congress last week before an outcry forced it to retreat. A protester died on Thursday.

"URGENT: I inform the country and international public opinion that I am being notified at this very moment of a BAN for 15 years," tweeted Capriles, adding that his legal team would speak later on Friday.

The Venezuelan comptroller's office has for a decade used a procedure known as "disqualification" that blocks politicians from holding office if they are deemed to have committed "irregularities" in managing state resources.

The comptroller earlier this year said he was considering barring Capriles, who is currently governor of the central coastal state of Miranda, from holding office.

Over the last few days, authorities have also accused Capriles of fomenting violence and bloodshed by leading increasingly intense protests against the unpopular Maduro.

Capriles has said he was being investigated in relation to donations from the British and Polish embassies and for spending state money on nonapproved items. The British embassy declined to comment, while the Polish embassy did not immediately respond.

The government says the comptroller's investigations are part of its anticorruption efforts. Opposition leaders say it is an arbitrary mechanism that allows the ruling Socialist Party to sideline popular politicians without due process.

The decision to politically neutralise Capriles will likely stoke tensions in Venezuela, where more than 100 political prisoners are now being held, according to the opposition and rights groups.

Fellow opposition leader Leopoldo Lopez, Venezuela's best-known jailed politician, was himself barred from office in 2008, when he was the popular mayor of a Caracas district.

Lopez had been expected to challenge late leader Hugo Chavez in the 2012 presidential election but was forced to hand the baton over to Capriles, who lost that vote and another against Maduro in 2013 after Chavez's death.

Maduro's government has said that a US-backed business elite is responsible for Venezuela's economic downturn and that it is trying to foment a coup to impose the right-wing rule.

"Mr Capriles, you're trying to ignite the country," Socialist Party official Freddy Bernal said during a government rally on Thursday.

Thousands of Maduro opponents marched on Thursday to protest a decision by the administration leaning top court to assume control of the opposition-led congress in what demonstrators said was a lurch toward dictatorship.

Venezuelan authorities confirmed a 19-year-old man was killed on Thursday during demonstrations and vowed to investigate the fatal attack, the first protest death since a controversy over the Supreme Court blew up last week.

The public prosecutor said on Friday afternoon it would charge police officer Rohenluis Mata with the death of Jairo Ortiz while he was at a protest late on Thursday.

Opposition leaders say he was shot as authorities tried to break up the protest in the hilly, low-income Carrizal area on the outskirts of Caracas, known for its state-provided housing.

Local media reported Ortiz was a university student planning to emigrate from Venezuela, like many in the middle class that have fled to Colombia, Panama, Chile or the U.S. city of Miami to escape the economic crisis and political turmoil.

Venezuela's oil-dependent economy is suffering a brutal recession that has millions of people skipping meals amid steep inflation and low salaries.

Lawmakers gathered on Friday in front of the state human rights ombudsman's office at dawn, wrapping red tape emblazoned with the words "danger, do not enter" around the building in a surprise protest.

"We declare this office closed because it's back is to the people," tweeted opposition legislator Milagros Paz.

"Jairo Ortiz died in the hands of this regime."

The opposition, which accuses ombudsman Tarek Saab of being a puppet of Maduro's government, was blocked on Thursday from marching to the ombudsman's office. Saab condemned Ortiz's death on Friday, calling it a "vile assassination."