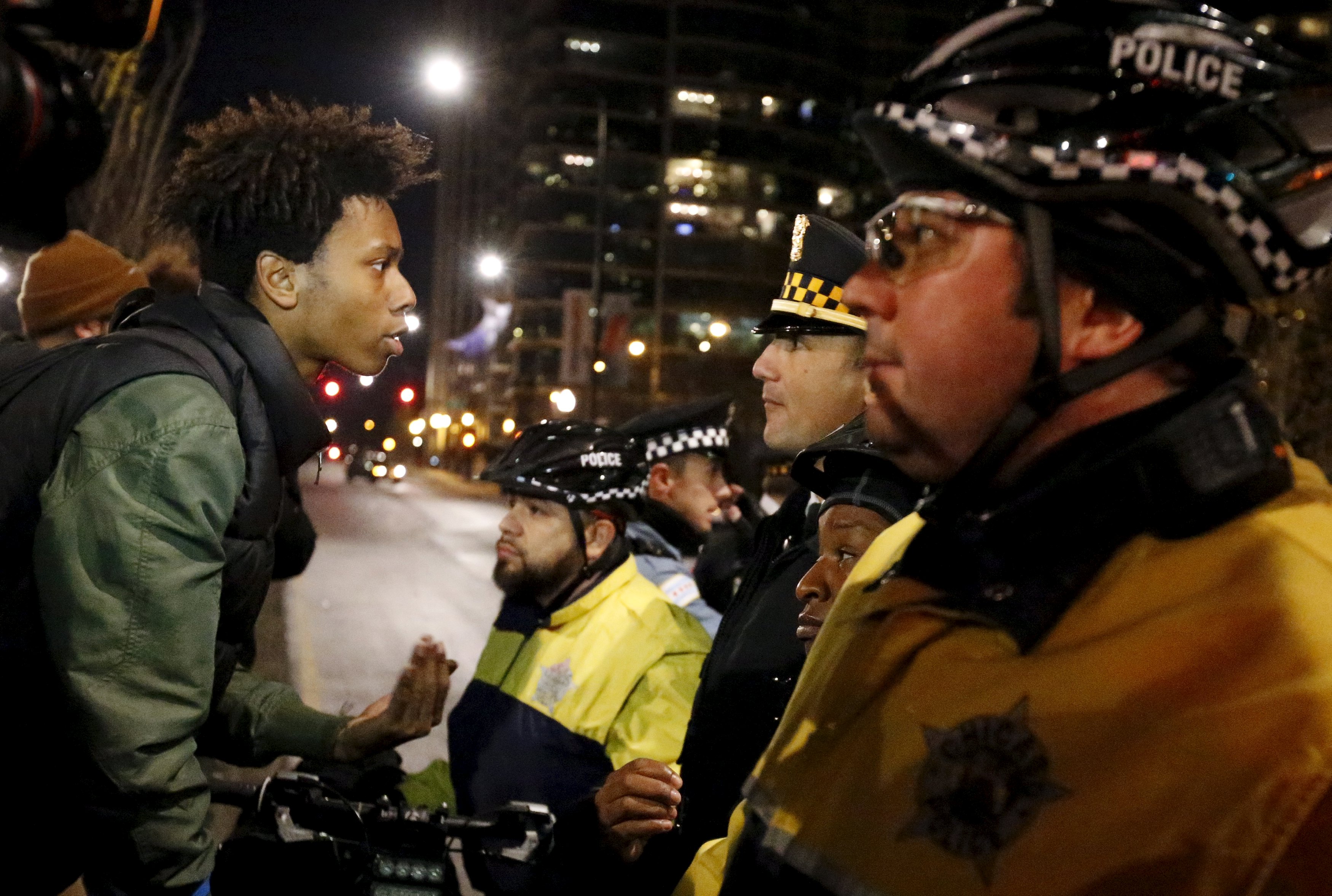 A demonstrator confronts police during protests in Chicago, Illinois November 24, 2015, after the release of a police video of the 2014 shooting of black teenager Laquan McDonald by a white policeman, Jason Van Dyke, who has been charged with murder.

CHICAGO - A white Chicago policeman who fatally shot a black teenager was charged with murder on Tuesday, hours before authorities released a long-awaited video that shows the youth walking away from officers as he is slain by a volley of 16 gunshots.

The graphic footage of last year&39;s shooting, taken from a camera mounted on the dashboard of a police car and made public under orders from a judge, sparked mostly peaceful street demonstrations in Chicago on Tuesday.

Protesters marching through the streets of Chicago tonight LaquanMcDonald pic.twitter.com/AUDtP75k0k

The clip showed 17-year-old Laquan McDonald, who authorities said was carrying a pocket knife and had the hallucinogenic drug PCP in his system, as he was gunned down in the middle of a street on Oct. 20, 2014. McDonald is seen jogging away from patrol vehicles pursuing him from behind, and then veering off diagonally at a walk as two more officers pull up in a squad car ahead of him.

Two policemen are seen jumping out of their vehicle in the center of the road, and drawing their weapons while advancing toward McDonald, who continues to move away. Within seconds he is struck by bullets, spins and crumples to the ground, his body jerking as he is hit by additional rounds of gunfire.

Cook County&39;s chief prosecutor, Anita Alvarez, acknowledged that she timed the filing of the first-degree murder charge against officer Jason Van Dyke to precede the video&39;s disclosure in a bid to mute harsh public reaction to the footage.

"With release of this video it&39;s really important for public safety that the citizens of Chicago know that this officer is being held responsible for his actions," she said.

The video originally was expected to be released a day later, in compliance with the Wednesday deadline set by a judge. But police said they made the clip public Tuesday evening after it was leaked to a local television station. Technical issues were blamed for a lack of audio with the tape.

Authorities, including Mayor Rahm Emanuel, appealed for calm as the city hoped to avert the turmoil over race and the use of lethal police force that has shaken much of the United States for more than a year.

Police said two protesters were arrested after a scuffle on Michigan Avenue.

"It&39;s a good start that they have charged the police officer, but we&39;ve clearly reached the point where something needs to change," said protester Monique Winegard, 33.

By 9 pm CST (0300 GMT) the demonstrators had assembled outside a police precinct, demanding the release of the two people who had been arrested.

The video, and prosecutors&39; account of the shooting, contradicted assertions by Van Dyke&39;s lawyers and the police union that the shooting was justified because Van Dyke felt threatened by the youth.

Prosecutors said Van Dyke fired the shots within 30 seconds of arriving at the scene, and just six seconds after emerging from his patrol car, emptying his gun at McDonald and preparing to reload.

"Clearly, this officer went overboard and he abused his authority, and I don&39;t think use of force was necessary," prosecutor Alvarez said at a news conference after Van Dyke&39;s initial hearing.

Joining the mayor and a dozen community leaders at a news conference during the day, Police Superintendent Garry McCarthy said officers would "facilitate" protests but would not tolerate criminal behavior.

Van Dyke was denied bail at a hearing in Chicago&39;s main criminal courthouse hours after the criminal charge was announced. If convicted, Van Dyke could face 20 years to life in prison.

Cook County Circuit Court Associate Judge Donald Panarese scheduled a second hearing for Monday where he said he wanted to view the video in court and reconsider bail for Van Dyke based on its content. Prosecutor Bill Delaney told the judge that witnesses and the video concur that McDonald was not moving toward Van Dyke.

Van Dyke has had 20 misconduct complaints made against him during the past 4-1/2 years, none of which led to any discipline from the Chicago Police Department, according to research by Craig Futterman, a University of Chicago law professor and expert on police accountability issues.

McDonald&39;s death came at a time of intense national debate over police use of deadly force, especially against minorities. A number of US cities have seen protests over police violence in the past 18 months, some of them fueled by video of the deaths.

The uproar was a factor in the rise of the Black Lives Matter civil rights movement and has become an issue in the November 2016 US presidential election campaign.

McDonald&39;s family called for calm, as did city authorities and black community leaders.

"No one understands the anger more than us, but if you choose to speak out, we urge you to be peaceful. Don&39;t resort to violence in Laquan&39;s name. Let his legacy be better than that," McDonald&39;s family said in a statement through their lawyer.

In Baltimore and Ferguson, Missouri, family appeals for peace were not always heeded.

From 2008-2014 there were an average of 17 fatal shootings by police each year, according to data from the Independent Police Review Authority, which investigates police misconduct.

Almost all shootings, fatal and non-fatal, are found to be justified.