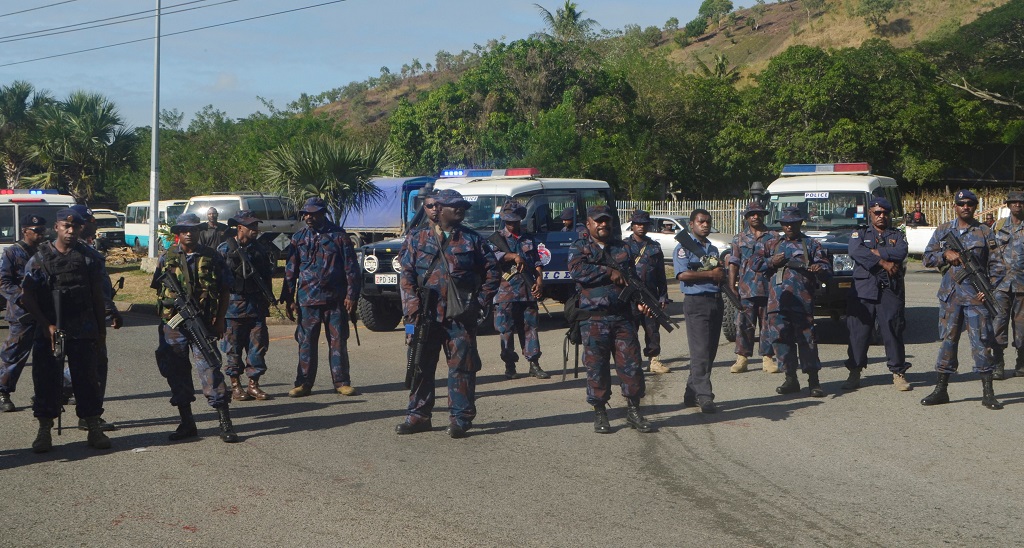 SYDNEY - Rioting, looting and gunshots erupted in the capital of Papua New Guinea on Wednesday after police opened fire on a student demonstration, wounding about a dozen people and killing as many as four, officials and residents said.

A glimpse of how the shootings started with PNG Police open firing on UPNG students. More coming as students share pic.twitter.com/fDK7FypPkZ

A groundswell of political unrest has surged in the island nation, just to Australia&39;s north, in recent weeks amid calls for Prime Minister Peter O&39;Neill to resign over corruption allegations.

People in Port Moresby reported police firing on the public and using tear gas to disperse crowds during a protest at the University of PNG&39;s Waigani campus.

"Now there is a very big clash with the public and with the police just outside the Port Moresby General Hospital," a hospital official told Reuters by telephone after a group of wounded students were taken there for treatment.

"There is also shooting going on, open gunfire."

Photos of students allegedly shot at by police making the rounds on the Internet PNG pic.twitter.com/ZH2sBokjAW

Papua New Guinea, formerly administered by Australia, struggles with endemic violence and poverty despite a wealth of mineral resources. It is ranked 139 out of 168 in Transparency International&39;s corruption index.

The Australian government, which routinely warns of high levels of serious crime and lawlessness, updated its travel advice, saying there had been an "unconfirmed number of deaths and serious injuries" and that unrest had spread to other cities, including Lae in the north.

The U.S. embassy in Port Moresby told its citizens to avoid areas of the city hit by violence. "The situation is still volatile and could escalate at any time," it said in a statement.

Hubert Namani, a lawyer and business leader, said public transport had been halted, businesses shut, and people were fleeing the streets.

"People are looting and rioting and sort of revolting, so the police are now caught trying to manage all of that," Namani told Reuters by phone from Port Moresby.

He said later a standoff had developed between protesters inside the hospital and police outside.

Noel Anjo, one of the leaders of the student protest, said the violence began when students started a planned march from the campus towards the parliament building in the capital, where police had set up a road block.

"Police did not like that idea and started assaulting the students, punching them, hitting them with the gun butts, before firing shots at them," Anjo said.

"The students were running for cover in all directions, but I saw some people badly wounded," he said.

There was no immediate comment from police in Port Moresby.

Richard Sanaka, a doctor in the emergency department at Port Moresby General Hospital, said there were 20 wounded students at the hospital, five in critical condition.

A major aid agency, which declined to be identified because it only had preliminary information, said a clinic at the University of PNG&39;s Waigani campus had reported at least 15 students were wounded, with four killed.

Video on social media appeared to show students fleeing amid clouds of tear gas and the sound of gunfire. Pictures showed several men with what appeared to be serious stomach, chest and leg wounds.

Thousands of students across PNG have been protesting and boycotting classes for weeks amid growing political unrest.

O&39;Neill has resisted calls to resign since he was implicated in a major corruption scandal two years ago that included alleged government mismanagement and questionable international dealings.

Deputy Opposition Leader Sam Basil said PNG&39;s parliament was adjourned on Wednesday until August because O&39;Neill was trying to avoid a no confidence push against his government.

"We wanted the prime minister to step aside and also subject himself to the law, which he doesn&39;t want," Basil told Reuters by telephone.

O&39;Neill&39;s office did not respond immediately to requests for comment.

Human Rights Watch called on O&39;Neill "to immediately launch an impartial, thorough and transparent investigation" into the shootings and hold to account any officials involved.

Despite that, an energy production boom, which includes Exxon Mobil&39;s $20 billion LNG plant, has fuelled annual economic growth of almost 10 percent a year for the past three years.

A spokesman for Newcrest Mining, which operates two remote gold mines in PNG, said its operations had not been affected. There was no comment available immediately from Exxon Mobil in PNG.