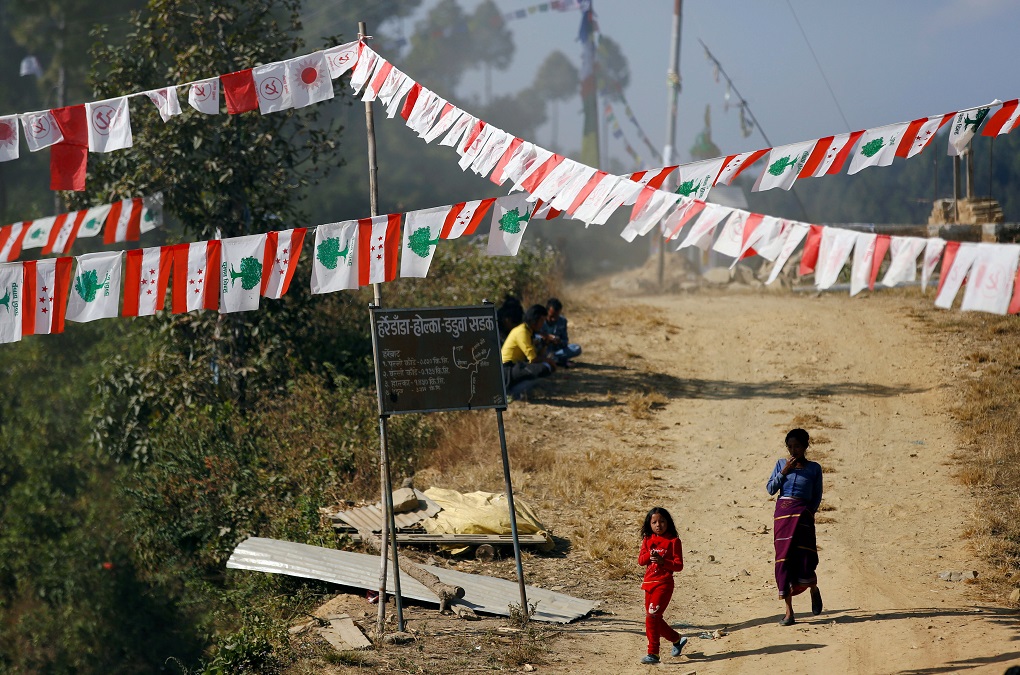 People walk along the street filled with the flags of various political parties during the parliamentary and provincial elections in Sindhupalchok District, Nepal 26 November 2017

CHAUTARA, Nepal - Millions of Nepalis headed to the polls Sunday for a historic election billed as a turning point for the impoverished Himalayan nation, hoping to end the ruinous instability that has plagued the country since the end of a bloody civil war a decade ago.

The two-phase elections for national and provincial parliaments are the first under a new post-war constitution born out of a peace deal that ended the 10-year Maoist insurgency in 2006 and set the country on a path from monarchy to democracy.

READ: Nepal goes to the polls for historic vote

It took nine years after the end of the conflict for the new charter to be agreed as a series of brittle coalition governments bickered over the country&39;s future as a federal democratic state.

Many hope that the elections, which will establish the country&39;s first provincial assemblies, will bring an end to political turbulence and limit the impact of the horse-trading in Kathmandu on much-needed development in the rest of the country.

Polling stations in Chautara, a town east of Kathmandu, were still busy mid-afternoon with lines of voters waiting in the bright sun to cast their ballots.

"It is hard to hope for change, but I am still voting," said 78-year-old Keshab Nath Upadhayay as he leaned heavily on a walking stick.

Upadhayay like many others in the impoverished Himalayan nation walked for hours to reach his nearest polling station.

In western Baitadi district, a 114-year-old woman made the journey to cast her vote, said local official Deepak Kumar Acharya.

Meanwhile, districts in the west have been hit by snow and sub-zero temperatures in recent days adding another obstacle to voters in one of the least developed corners of Nepal.

Voting was temporarily suspended in three polling centres after an explosive device was found at one and acid was sprinkled on ballot boxes at two others, local officials said. There were no reports of injuries.

There has been sporadic violence in the lead up to the polls, mostly blamed on a splinter faction of the Maoist Party, which has left dozens injured.

Around 3.2 million people across the north of the country, including areas badly hit by a devastating earthquake two years ago, are eligible to vote in Sunday&39;s first phase. The more populous south will vote in 10 days&39; time.

Nepal&39;s new constitution finally passed in 2015, lays out a sweeping overhaul of the political system and aims to devolve power away from the central government to seven newly created provinces.

Rules laid out in the new charter will weed out some fringe parties from the parliaments and raise the bar for ousting a prime minister, leading to hopes that the next government could be the first to last a full five-year term.

Nepal has cycled through 10 leaders in the last 11 years and corruption has flourished, hampering growth as well as the recovery from the 2015 earthquake that destroyed half a million homes.

"The government changes every nine months and don&39;t get to do any work. Instead, they fight for power. We hope that will change," said farmer Gyan Bahadur Thapa after casting his ballot in Chautara.

However, analysts warn that the impact of the changes could be limited, with the three parties that have dominated the political stage since the end of the conflict expected to take the lion&39;s share of seats.

The Maoist Party of the former rebels has formed an electoral alliance with the communist CNP-UML, fielding candidates jointly in key races.

The powerful bloc has left the ruling party, the centrist Nepali Congress, on the back foot, forced to look to smaller parties in a bid to remain in power.

Supporters said the Maoist insurgency and the drawn-out peace process that followed it were intended to create an equal society. But the political instability and endemic corruption have undermined that goal.

Under the new constitution, a proportion of seats in the federal and provincial assemblies are allocated to women and people from indigenous communities and the lowest Dalit caste.

Nepal&39;s borders with India and China have closed ahead of the vote and thousands of security personnel have been deployed at polling stations.

Results are expected a few days after the second vote on 7 December.