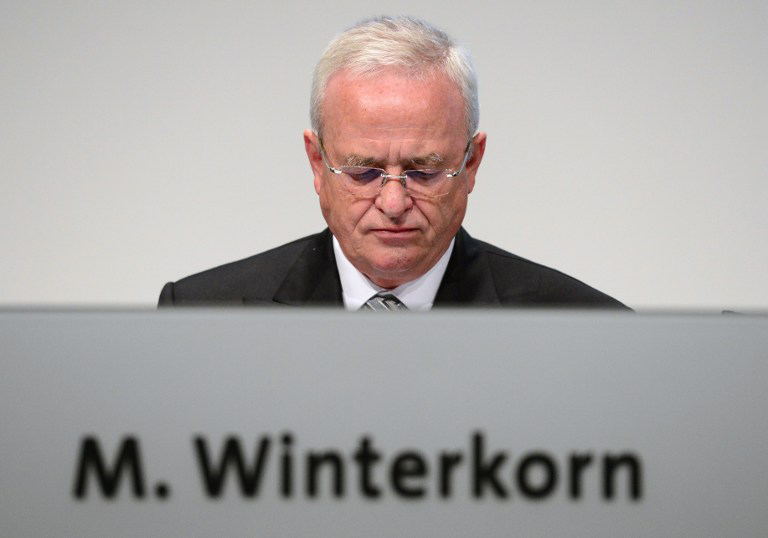 FILE image of Volkswagen CEO, Martin Winterkorn, taken on 5 May 2015, during the shareholders' annual general meeting of VW AG in Hannover, Germany.

"Volkswagen needs a fresh start - also in terms of personnel. I am clearing the way for this fresh start with my resignation," 68-year-old Winterkorn, who has been at the helm for eight years, said in a statement.

"As CEO I accept responsibility for the irregularities that have been found in diesel engines and have therefore requested the Supervisory Board to agree on terminating my function as CEO of the Volkswagen Group."

US authorities are planning criminal investigations after discovering that Volkswagen programmed computers in its cars to detect when they were being tested and alter the running of their diesel engines to conceal the true level of emissions.

"I am shocked by the events of the past few days. Above all, I am stunned that misconduct on such a scale was possible in the Volkswagen Group," Winterkorn said.

Senior members of Volkswagen&39;s supervisory board said in a separate statement they expected further heads to roll in the coming days as an internal investigation seeks to identify who was responsible for what has turned into the biggest scandal in Volkswagen&39;s 78-year history.

Volkswagen said on Tuesday it was setting aside 6.5 billion euros ($7.3 billion) to help cover the costs of the crisis, though analysts doubt that will be enough.

Meanwhile, VW could be forced to recall vehicles in South Africa, in the wake of the scandal.

The National Regulator for Compulsory Emissions and the Transport Department are investigating the vehicle manufacturer.

Earlier this week, it emerged that it&39;s been rigging environmental tests for diesel emissions in the United States.

Some 11-million vehicles worldwide are affected.

Authorities will conduct tests on vehicles approved in South Africa to determine whether they&39;re compliant with local standards.

If not, they may be recalled.

* Watch eNCA&39;s video report into ramifications for South Africa, in the gallery above