War correspondent gunned down in Syria 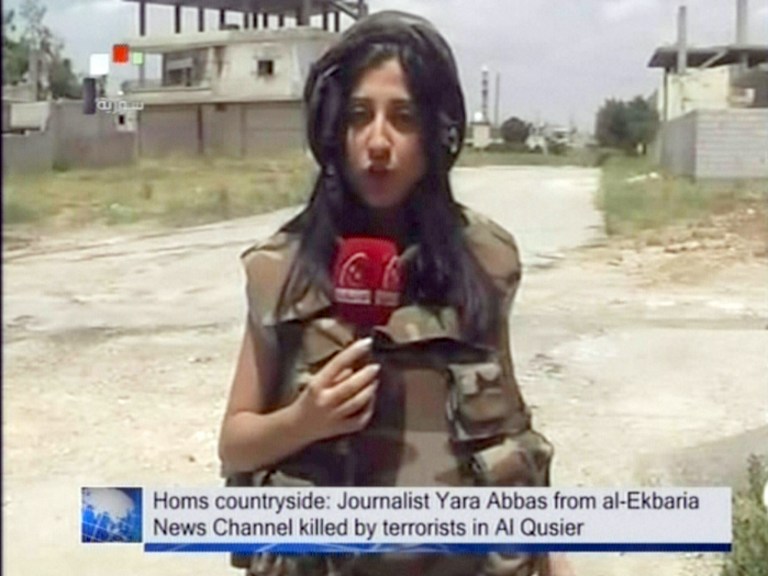 An image grab taken from the Syrian state TV shows Yara Abbas, a reporter for Syria's official television station Al-Ikhbariya, who was killed while covering an army assault on the rebel stronghold of Qusayr.

HEZBOLLAH, Lebanon - Gunmen killed a TV correspondent for a Syrian state-owned channel and wounded two other station employees on Monday.

They were covering clashes near the border with Lebanon, Syria&39;s government said, as regime troops backed by fighters from the Lebanese militant Hezbollah group advanced on a rebel-held town in the strategic area.

The fighting around the town of Qusayr has taken a heavy toll on both the rebel and government forces, including the regime&39;s Hezbollah allies.

An activist group said the Lebanese militia has lost nearly 80 fighters this month, most of them in Qusayr.

Syria&39;s Information Ministry said Yara Abbas, a prominent female war reporter for state-owned Al-Ikhbariyah TV, was attacked by rebels near the Dabaa military air base in the central province of Homs.

The ministry said in a statement carried by state TV that the car carrying Abbas and her crew was ambushed in Dabaa.

The attack also wounded two other of the station&39;s employees, a cameraman and his assistant, according to state TV.

Dozens of journalists have been killed, wounded or kidnapped since Syria&39;s crisis began in March 2011.

Over that time, more than 70,000 people have been killed in the conflict, according to the United Nations.

Dabaa air base is located near Qusayr, which has been under attack by government forces and Hezbollah fighters since last week.

Dozens of rebels, troops and Hezbollah members have been killed in the heavy fighting that entered its ninth day on Monday.

It said troops and Hezbollah fighters captured the nearby town of Hamidiyeh, tightening the siege on Qusayr.

State TV said troops captured more parts of the northern and central rebel-held neighborhoods of Qusayr that had been mostly under rebel control shortly after the crisis began.

The Observatory said that Hezbollah has lost 79 members in Syria in 10 days of fighting, all of them but four of them in the Qusayr area.

The battle for Qusayr has exposed Hezbollah&39;s growing role in the Syrian conflict.

The Shiite militant group, which has been fighting alongside President Bashar Assad&39;s troops, initially tried to play down its involvement, but could no longer do so after dozens of its fighters were killed in the area and buried in large funerals in Lebanon.

On Saturday, Hezbollah&39;s leader Sheikh Hassan Nasrallah firmly linked his militant group&39;s fate to the survival of the Syrian regime, raising the stakes not just in Syria, but also in Hezbollah&39;s relations with rival groups in Lebanon.

Qusayr&39;s value lies in its location along a land corridor linking two of Assad&39;s strongholds, the capital of Damascus and towns on the Mediterranean coast, the heartland of his minority Alawite sect, an offshoot of Shiite Islam.

For the rebels, holding Qusayr means protecting a supply line to Lebanon, 10 kilometers away.

Also Monday, Syrian TV said troops ambushed a group of gunmen shortly after they crossed from Lebanon on their way to Qusayr. It said the infiltrators suffered casualties.

At least three bodies could be seen on one of the streets.

The Observatory and the Local Coordination Committees reported clashes and shelling in other parts of Syria including the capital Damascus and its suburbs, the northern province of Aleppo and Idlib and Daraa to the south.

The Observatory said three days of clashes between rebels and Kurdish gunmen in Aleppo province has left three Kurds and 16 opposition gunmen dead.

The main Syrian opposition group, meanwhile, said in a statement on Monday that it has not taken a final decision on whether to attend UN-sponsored talks with regime representatives in Geneva next month on ending the civil war.

The Syrian National Coalition, which has been holding meetings for days in Turkey, said it added eight new members including leading opposition figure Michel Kilo.

Damascus has said that it has agreed "in principle" to attend the talks in Geneva.

In Brussels, the European Union remained divided on Monday on whether to ease sanctions against Syria to allow for weapons shipments to rebels.

Britain is the most outspoken proponent of relaxing the arms embargo but faces opposition from some members who feel more weapons would only increase the killings and tarnish the EU&39;s reputation as a peace broker.

Several nations say that arming the opposition would create a level playing field that would force Assad into a negotiated settlement.

Journalists covering Syria&39;s bloody conflict, on both the government and rebel sides of the front lines, have been caught in the crossfire -- or targeted -- on several occasions.